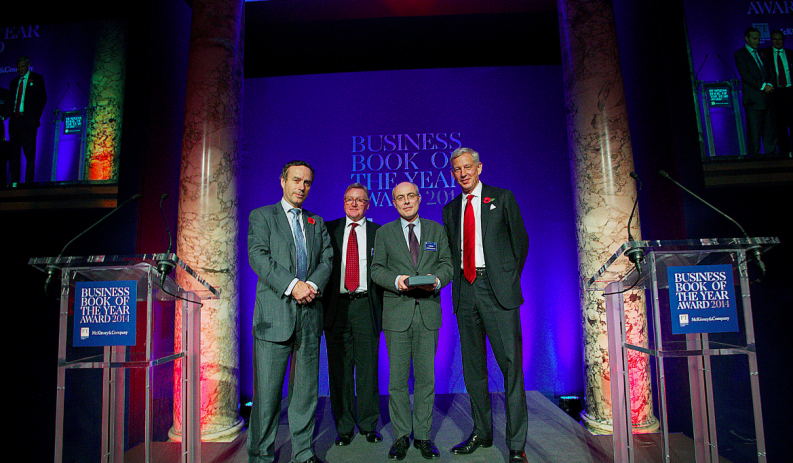 After attending the FT Business Book of the Year ceremony in London, Roger Tagholm wonders “what if novels had subtitles like business books do?”

You could call it an overdraft of words. There seems to be an unwritten rule that business books have to have lengthy subtitles that seek to explain what the book is about. The shortlist for this week’s Financial Times McKinsey & Company Business Book of the Year Award, which was won by Thomas Piketty’s Capital in the Twenty-First Century on Tuesday night at a dinner at the Victoria & Albert Museum in London, afforded some perfect examples (though admittedly, not the winner). Deep breath. Here goes: Dragnet Nation: A Quest for Privacy, Security and Freedom in a World of Relentless Suveillance by Julia Angwin (Times Books)

House of Debt: How They (and You) Caused the Great Recession, and How We Can Prevent It from Happening Again by Atif Mian and Amir Sufi (University of Chicago Press)

The Second Machine Age: Work, Progress, and Prosperity in a Time of Brilliant Technologies by Erik Brynjolfsson and Andrew McAfee (Norton)

Creativity, Inc.: Overcoming the Unseen Forces That Stand in the Way of True Inspiration by Ed Catmull, with Amy Wallace (Bantam Press)

Atonement: How Making up Stories Can Make Amends for Past Wrongs and Be a Force for Healing by Ian McEwan (Vintage)

Gone Girl: Why Your Marriage is Not What It Seems – And What You Can do About it by Gillian Flynn (Orion)

Bleak House: Organisational Structure Among Our Giant Legal Institutions and How it Affects the Quest for Truth by Charles Dickens (Penguin)

Us: The Bonds of Love That Unite Families Through Difficult Times and What They Reveal About the Way we Live Today by David Nicholls (Hodder)

This was the tenth awards and saw BBC Director General Tony Hall give the keynote address (summary: content is paramount) and the presentation of the £30,000 prize to Piketty for Capital (Harvard University Press), only he wasn’t there to accept it. He is away in India for the book’s launch. The prize was collected on his behalf by Harvard University Press’s Executive Editor Ian Macolm and Sales Director Richard Howells. Malcolm noted that Capital was given brutal treatment in the FT, which challenged Piketty’s figures, but he praised the openness and generosity of its editor Lionel Barber in still awarding the title the prize and suggested that the same openness is not found in the Murdoch press.

By video, Piketty said that he wanted to promote “the democratisation of economic knowledge” in his book and “to help readers reach their own conclusions.” Barber said it was a “transformative book that makes a powerful statement.” The evening also saw the inaugural Bracken Bower Prize for ‘the best proposal for a book about the challenges and opportunities of growth’, written by someone under 35. The prize is named after Brendan Bracken, who was Chairman of the FT from 1945 to 1958, and Marvin Bower, MD of McKinsey from 1950 to 1967. It was won by Saadia Zahidi, the youngest Senior Director at the World Economic Forum, for her proposal Womenomics in the Muslim World, which looks at the positive potential of Muslim women globally. “Too often the story that’s told is a sad one,” she said. “I want to show how economics can trump culture.” She receives a £15,000 cheque – which could well be more than any advance she might receive subsequently.

One final observation: it’s not just lengthy subtitles that proliferate among business books, it seems that publishers in the field, and their authors, love to add the tag ‘nomics’ to whatever the subject might be. Thus among guests was Jenny Anderson of the New York Times, who is the author of Spousonomics: Or how to maximise returns on the biggest investment of your life (there’s one of those subtitles again!). Zahidi’s winning proposal used ‘Womenomics’, as mentioned above, and a proposal that received ‘Special Mention’ was Ndoronomics, a study of African economics by Gregory Smith at the World Bank in Washington DC.

Please, enough with the ‘nomics’!