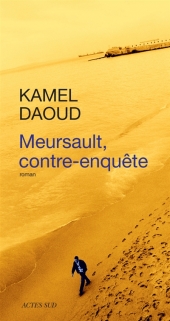 French novelist Lydie Salvayre won the coveted 2014 Goncourt prize earlier this week for her book, Pas pleurer, (No crying). The daughter of Spanish republicans exiled in France, Salvayre’s novel is about the Spanish civil war. Hot on her heels during the 5th round of voting was Algerian first-time author, Kamel Daoud, who was an unanticipated candidate on the short-list.

Although Daoud’s book had already been the runner-up for several prestigious awards and won the François Mauriac prize, and the Prix des cinq continents, the fact that his novel was only two votes away from winning the Goncourt is remarkable. One year after Albert Camus’ centenary, the Algerian journalist’s novel, Meursault, contre-enquête, (Meursault, counter-investigation), is an homage to the beloved writer. Daoud re-imagines Camus’ 1942 novel, The Stranger, by recounting the story of the nameless Arab killed by the character Meursault on a beach in Algiers. Daoud, gives him a name—Moussa—and his story is narrated by his younger brother Haroun, over the course of 15 days, to an academic sitting in a bar in Oran. Haunted during his entire lifetime by the death of his brother, Haroun tells the academic “I’ve been waiting for you for years; if I can’t write my own book at least I can tell it to you, no?” Like the writers Yasmina Khadra, Boualem Sansal, Maïssa Bey, and others, Daoud said in a recent interview with Algerian newspaper El Watan that Camus’ literature had been essential in his life. “Books such as The Rebel marked me, gave me back the dignity of being a man.”

Daoud, who writes an often-scathing political column for the newspaper Le Quotidien d’Oran said that his book was not a response to Camus, but a questioning of one of the author’s works. The Stranger, he said, is a novel “that speaks to me. I find the story very beautiful. And it’s a fabulous pretext for literature.” Daoud added that The Stranger questions the world, and that he wanted to continue in this direction. There is also something “fascinating” in this work, said Daoud, “…In traditional crime novels, you have the body but not the murderer. In Camus’ The Stranger, you have the murderer but not the body!”

Daoud resuscitates a story and characters that for 72 years had remained silent and nameless and in doing so achieved great public and critical success. First published in 2013 by the Editions Barzakh, which has a partnership with Actes Sud, Actes Sud’s 2014 edition has been very successful in France. Among other rights sales, world English rights have gone to Other Press, in Germany to Kiepenheuer & Witsch, and in China to Shanghai 99.