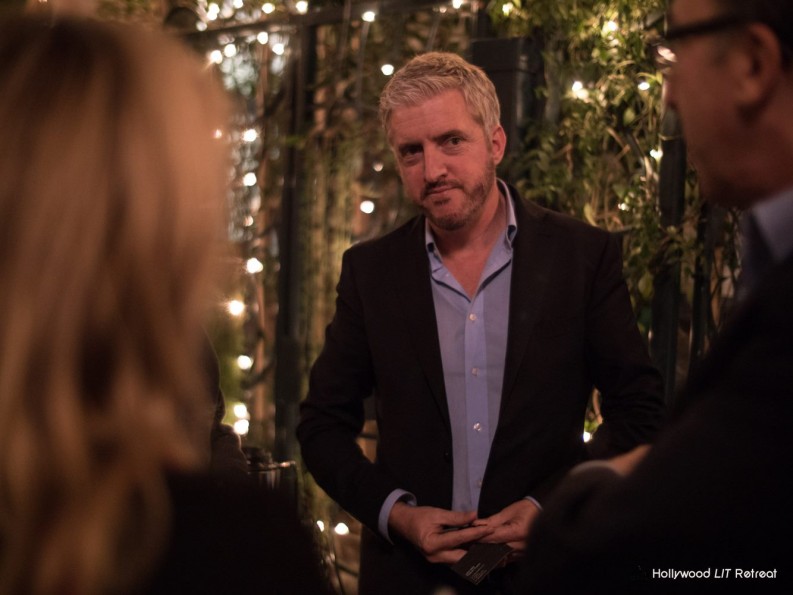 At the Hollywood L.I.T. Retreat producers, filmmakers and more shared inspiration for building a career and getting your story to the silver screen.

LOS ANGELES: “They say that you’re invited to the Hollywood Literary Retreat twice in your career: once on the way up—and once on the way down. May I say, it’s great to be back,” joked novelist, playwright, poet and screen adaptation adept Anthony McCarten as he took the stage at Santa Monica’s tony 41 Ocean Club to regale a houseful of storytellers of every stripe with his recent coup: The Theory of Everything. Thrilling book-to-film odysseys like this one enchant and enflame anyone who’s ever contemplated a keyboard bearing within him/herself the image of a book deal. Looked at from the author or publisher perspective, Mr. McCarten’s adaptation of Jane Hawking’s Travelling to Infinity: My Life with Stephen is more fairytale than adaptation how-to. Upon reading the former Mrs. Hawking’s book, Mr. McCarten describes what he terms a “galvanizing moment”:

I thought, well, I just have to become a crazy person now and I have to get the rights to this book…so I decided to do something untypical for me which is become a stalker…I literally showed up at Jane’s door and knocked and she opened the door and I told her, basically, don’t be afraid: I’m here with a concept for a film. And with her now characteristic graciousness, she allowed me in, she plied me with sherry and cucumber sandwiches. We sat down and we began a conversation that lasted eight years.

After five of those years, Mr. McCarten acquired a co-conspirator in veteran Hollywood producer Lisa Bruce:

Lisa and I, we doubled the charm offensive on the Hawking family…we weren’t going to take no for an answer. And we got there. There was a day when Jane finally picked up a pen and she signed on the line which was dotted. And we then quickly had something we could sell.

Now, for the hard part—extracting cinematic gold from nuggets of memoir:

Stephen Hawking was on record as saying that he wanted no investigation into his private life so that door was pretty much closed. But Jane Hawking provided a surprising portal into this story. I love tangential approaches to history…You can invent too much when you deal with a real life, but you can also make the mistake of inventing too little. History and real life give you navigation points but don’t really tell you too much about the journey from point to point. This is where artistic license comes in. I would say that as long as your use of artistic license is always in the service of the truth, then…in fact, you must invent…It’s a presumption to imagine what a genius says to his wife or what his wife says to the genius…You have to engage in “emotional ventriloquism.”

Did the subject like the portrait? “Jane, when she saw it, she said she felt she was floating on air…[and Stephen said to the filmmakers] He forgot he was watching an actor playing him.” Of course, it doesn’t always take eight years. Sometimes a mere seven-and-a-half years will do the trick; sometimes the book comes after the movie deal; and sometimes the hero isn’t a genius, but an everyman. Former CAA agent and veteran manager-producer Mike Menchel illustrates with a man-loves-underdog story:

Underdog stories, I love. I love stories about people who never give up. I think I’m that kind of guy. I think I’m a guy that if you tell me no, that’s where I begin. And I love people like that. I just love those underdog people because they just have such fantastic stories that they want to get out. I like to hear those stories, I like to tell those stories. I just produced a film called One Chance, the story about Paul Potts. Paul is an opera singer out of Great Britain. All he wanted to do all his life was sing opera. But everybody told him that first of all you’re no good at singing opera, second of all, there’s no future in singing opera and you won’t be any good—you can’t do anything. His father hated him because he wanted him to work in the steel mill with him. His mother…was afraid to support him. He had no real friends. But he wanted to be an opera singer. Took me seven-and-a-half years—I hate to admit—but it’s true. Seven-and-a-half years to bring that film to the screen…the whole film is about never giving up. Since 1990, storytelling impresario Lynn Isenberg’s sui generis Hollywood Literary Retreat has persevered in the hunt for great story stories. When many-hatted Ms. Isenberg (novelist, nonfiction author, screenwriter, producer, media consultant and some-time professor) gathers from her A-list-powered Rolodex a congeries as catholic as eclectic, the storytelling is guaranteed to open the mind, the heart and the imagination. A pretty good buy for the ticket price.

In the early years, Ms. Isenberg’s retreaters were sequestered away in sylvan surround (picture Cheever’s beloved Yaddo hideout or Frost’s paradisiacal Bread Loaf Mountain); her recent retreats hide in plain sight, right in the calm eye of the storm. No more babbling brooks, no more starry skies. In fact, no more “retreat.” Newly re-christened Hollywood L.I.T. (Literature | Intelligence | Technology), the gathering finds itself fittingly but a sunny stroll from the high-technology giants setting up shop by the beach these days—perhaps the ideal environs to ponder the unsurveyable immensity of “story.”

Inspiringly comedic author Judy Carter (The Message of You: Turn Your Life Story Into a Money-Making Speaking Career, St. Martin’s Press, 2013) opened the evening with a rendition of her popular TED talk: “You can’t spell message without a mess…And you can’t see that message, you can’t really understand how that mess in your life can be a successful story without the last three letters—which are unheard of to say in Hollywood—a-g-e, age.”

Ms. Carter tells of a woman whose battle with cancer lit a desire to learn to do stand-up:

Hey, anyone see my car outside? It’s the one with the bumper sticker that says, “Lose weight now, ask me how.” And in that one laugh, she transformed her mess to success. And she found her passion for life—in her mess. She found that she could write a blog that others connected to; she turned that blog into a book. And then what happened? They put her on the “Today Show.”

Ms. Carter then tells of how her own quadriplegic sister’s wake became fodder for an inspirational talk to paralyzed war veterans. No lemons-to-lemonade tale, this. She means it: take your mess, add some age to it—and there’s your story…ready for market.

President of Rhino Films, Stephen Nemeth finds character to be his way into story:

My mother was in the CIA—and its predecessor, the O.S.S.—and my father was a captain in the Royal Medical Corps. They met at the Sacher Hotel in Vienna just after the war. That night, my Dad said, “Louise, I don’t find you entirely disingenuous, I’d like to marry you.” She said yes…My Dad was an incredibly live-n-let-live, passive, psychoanalyst and my mother had started an organization called Stamp Out Smog in 1967 with Paul Newman and other really interesting activists. She was considered by the then-mayor of Bel-Air Sam Yorty as part of the “radical fringe”…I don’t exactly know how that affected what I’m doing now, but I am absolutely interested in great characters.

Robin Schwartz, President of Television at Brillstein Entertainment starts by listening to writers:

Being the daughter of a narcissistic mother, I, clearly, was a very good listener…I have been thinking a lot about “people stories” and how to listen to them and how to make them come alive and where they come from and a lot about how to bring them out and about being able to facilitate great work that is autobiographical…shaping them and figuring out where the nuances are that make a really good narrative.

Veteran film and television producer Gerard Bocaccio likes to sit writers down and ask, “So, what’s outside that window? What’re ya lookin’ at? What are you going to talk about?” Mr. Bocaccio produced The Pentagon Papers (with James Spader as Daniel Ellsberg), the founding four series of the F/X Network and a biopic on death row inmate and children’s book author, Stan “Tookie” Williams, to name a very few. Mr. Bocaccio tells about encountering Arnold Schwarzenegger at a piano recital just as Mr. Williams’s final appeal appeared on the governor’s desk. The governor indicated to Mr. Bocaccio that complicatedness precluded him from interceding. “It’s a complicated story, a complicated issue and he was not going to weigh in,” Mr. Bocaccio said the governor said. This, it seems, limns the danger of proffering a complicated story.

Mike Menchel tells of a recent sale to HBO wherein the entire story and the pitch consisted of two words: “Prison Town.”

David Wolpe, whose David: The Divided Heart (Yale University Press, 2014) recently sold to Warner Brothers as the basis for Hollywood’s second King David story presently in development. (Ridley Scott has King David on the books at 20th Century Fox; Scott’s Exodus: Gods and Kings is due out next month.) Rabbi Wolpe, himself quite notable for questioning the historicity of the Exodus story, told the Hollywood L.I.T. gathering a heart-rending tale of a rabbi who comforted a small child cowering in the cold through a frozen winter’s night in fear of the approaching Cossacks. The rabbi soothed the child with kindly words and then spread his coat over the child. Rabbi Wolpe closed by offering the attendees a blessing:

Bowker says nearly seven new works of fiction and literature hit the shelves every hour of the day and night (2013 estimates). At an inch each, at year’s end, that’s a mile-high stack. Everybody knows Hollywood loves books. But there’s a knack to getting a book at the fingertips and under the nose of Hollywood storytellers. Publishing Trends (Market Partners Int’l) finds a mere four dozen pros in book-to-film matchmaking. The numbers brook no spreadsheet reasoning: 60,000 new books a year (plus the Bible) and 6,500 Producers Guild of America members to hit up for rights sales. Where to start?

Ms. Isenberg’s utterly delightful confabulatory salon-cum-think tank offers priceless proof of a deep truth: there is no “system;” this is a very, very human business. Come to Hollywood and say hello. Bring a great story.