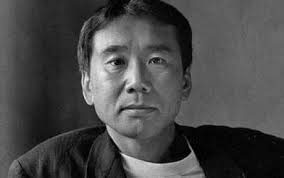 The Japan Times reports that Haruki Murakami “sent a message of encouragement” to pro-democracy protestors in Hong Kong while accepting the Welt Literature Prize (Welt Literaturpreis) at an awards ceremony in Berlin, comparing them to former residents of East Germany “confined by the Berlin Wall,” and to Palestinians “trapped in the recent conflict in the Gaza Strip.”

Murakami became the first Japanese author to win the Prize of 10,000 euros, awarded by the German newspaper, Die Welt, since 1999.

When he accepted the award this weekend (in a rare public appearance), he spoke to the audience about walls, and the hope for a new era of peace that faded soon after the fall of the Berlin Wall in 1989.

“A wall eventually becomes a fixed system, one that rejects the logic of any other system, sometimes violently. And the Berlin Wall was certainly a striking example of that.”

He went on, adding that “‘The Cold War is over,’ I told myself, ‘and I’m sure a more peaceful, positive world lies ahead.’ I think many people around the world felt the same way. But sadly, this feeling of relief didn’t last long,”

But talking about terrorism and the Middle East and terrorism (including 9/11), he said that “Our hopes for a happier world collapsed with little to show for it. One wall finally collapses, the world looks different, and we breathe a sigh of relief, only to discover that another wall has been erected in another part of the world.”

“A wall of ethnicity, of religion, a wall of intolerance, of fundamentalism, a wall of greed, a wall of fear. Are we unable to live without a system of walls?”

Asahi Shimbum notes that Murakami explained that walls have always been an “important motif” in his novels. Indeed, on accepting the Jerusalem Prize, in his speech, entitled “Walls and Eggs,” Murakami spoke out against Israel’s invasion of the Gaza Strip, adding that he will always “Stand on the side of the egg” that “breaks against walls.”

“When a person reads fiction and is moved and excited by it, he may break through that wall together with the author. By means of a story, we’re able to imagine quite vividly a world unlike the one we live in now.”

He concluded his speech with a message to the protestors in Hong Kong who he sees as struggling with a “wall of political system.”

“In a world of walls, imagining a world without them, clearly seeing that kind of world in our imagination may, in some cases, lead us to see it in reality,” Murakami said. “I would like to keep on believing that stories have that kind of power.”

“I’d like to send this message to the young people in Hong Kong who are struggling against their wall right now at this moment.”

And, there’s no better time to explore the work of this great novelist than now. At our reading group devoted to the novels of Haruki Murakami, A Wild Murakami Chase, we’ve just started our reading of his latest book, the #1 New York Times best-seller, Colorless Tsukuru Tazaki and his Years of Pilgrimage.

It’s a mesmerizing work, one that I devoured in a single sitting. As rock legend (and damn fine writer) Patti Smith described it in The New York Times,

This is a book for both the new and experienced reader. It has a strange casualness, as if it unfolded as Murakami wrote it; at times, it seems like a prequel to a whole other narrative. The feel is uneven, the dialogue somewhat stilted, either by design or flawed in translation. Yet there are moments of epiphany gracefully expressed, especially in regard to how people affect one another. “One heart is not connected to another through harmony alone,” Tsukuru comes to understand. “They are, instead, linked deeply through their wounds. Pain linked to pain, fragility to fragility. There is no silence without a cry of grief, no forgiveness without bloodshed, no acceptance without a passage through acute loss.” The book reveals another side of Murakami, one not so easy to pin down. Incurably restive, ambiguous and valiantly struggling toward a new level of maturation. A shedding of Murakami skin. It is not “Blonde on Blonde,” it is “Blood on the Tracks.”

If you’ve been meaning to read this book, now is the time.

Join in the discussion on our group reading blog dedicated to Haruki Murakami, A Wild Murakami Chase.

And to read an interview with Murakami (in German) for Die Welt, click here.