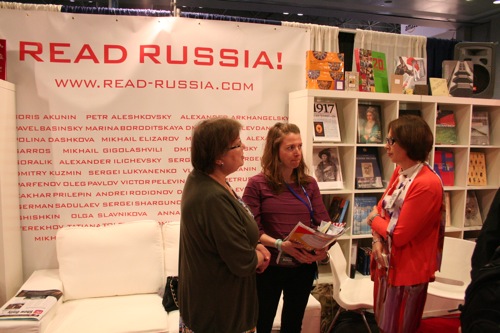 A string of factors, including resistance to contemporary Russian writing, has contributed to the end of new translations from Glas.

Russia Behind the Headlines reports that Glas, the pioneering publisher that has helped to introduce post-Soviet literature to the world by translating 170 authors since its launch in 1991, is suspending operations. Its founder, Natasha Perova, talked to RBTH about the company’s history, and “the current attitude to publishers of Russian literature.”

Perova told Phoebe Taplin that she “fell in love” with contemporary Russian literature while editing Soviet Literature magazine in the late 1980s. “I felt I ought to share this new-found treasure with people from other countries who only knew our 19th-century classics,” she told Taplin. Glas, which took its name from the Russian word for “voice” was founded in 1991. “I was reading avidly, Perova said. “There was a huge accumulation of unpublished books known to readers only through unofficial samizdat copies.”

And while the reemergence of literary prizes in Russia was often a good indicator of quality, largely, Perova “trusted my own intuition.” And that intuition, it seemed, rarely steered her wrong: big-name, prize-winning authors such as Victor Pelevin, Vladimir Sorokin and Lyudmilla Ulitskaya were just three among many that Perova championed before larger publishing companies did. “I only regret that for lack of funds I could not publish all the books I admired,” she told Taplin. “Many brilliant names have been overlooked by foreign publishers.”

“Initially,” she told RBTH, “I wanted to embrace the entire literary scene and published only anthologies. But, as she discovered, “there was too much good material: new works, formerly banned books, and rediscovered classics from the 1920s and 30s.” Over the past 24 years, Glas has published an impressive list of 75 titles, half of these are anthologies, which contain the works of 170 different authors “representing various trends and types” of Russian literature.

And while Perova says that she owes everything to her translators. “They came to me themselves and showed great support,” translator Arch Tait, who helped edit Glas in the 1990s, praised Perova’s eye for spotting literary talent and altruism, telling RBTH, “Natasha has published hundreds of people for the first time in English.”

But it was never easy. “I thought the world would gasp with admiration,” Perova said, but “both publishers and the public were slow to appreciate contemporary Russian literature.” An initial print run of 125,000 had to be cut back, but there was always a small but appreciative audience for what she was doing; Perova told RBTH that it was the “invariably supportive and complimentary” letters from readers that helped keep her going.

Another factor hurting translated Russian literature, Perova says, is the emergence of contemporary émigré writers who “paint a more digestible picture of Russia.” Because of this, she feels, foreign publishers are scared off by books that show “Russia in the raw, with its miseries and struggles,” while foreign readers, in turn, are spoiled by “smooth-moving, light fiction.”

Russia’s recent difficulties on the world’s political stage turns out to be another major factor. “Our American distributors told me this summer that due to the worsening attitude towards Russia they can no longer sell our books successfully.”

And making things even more difficult is the fact that because she is a Russian publishing works in English, her project is not “eligible for grants at home or abroad.” “I can’t apply for help anywhere,” she explained. “Due to falling sales and rising costs…it is no longer possible to publish translated literature without external support, which I have never had.” Even so, she will continue to look for and promote new and overlooked authors: “New talents keep springing up. I’ve always been on the lookout for them.”

But over the past 25 years, the praise for Glas has shown the project’s worth. George Steiner said of it that, “Glas has become almost disturbingly indispensable. The texts and voices out of Russia come through with formidable insistence. More now than ever before, precisely because hopes on their native ground are again precarious,” while The Times Literary Supplement added, “Glas gives us a sense of Russian literature in motion. If it cannot perhaps mercifully convey fully what it is like to live in Russia at present, GLAS at least gives us a taste of what it is to be a reader there.”

To which Perova responded modestly, saying that “I must say that we have collected enough praise along the way to convince me that we have not worked in vain,” Perova says. “I have never regretted a single publication,” she adds. “Each is interesting and important in its own way.”