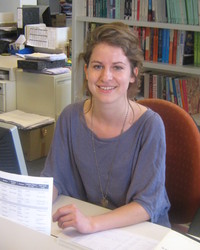 Anna Kelly, an editor at Hamish Hamilton, reflects on her discoveries in Mexican literature during a recent trip to Mexico sponsored by the British Council. Anna Kelly is an editor at Hamish Hamilton in the UK

There are too many people in this part of the world who haven’t read Pedro Páramo, and until six months ago I was one of them. A short novel written by Mexican writer Juan Rulfo in 1955, it begins with a man called Juan Preciado visiting his mother on her death bed. She exhorts him to return to Comala, her hometown, to find his father: Pedro Páramo. Juan dutifully travels to Comala, but when he arrives there and begins to ask after his father, he quickly realizes that all the people in the town are dead. What follows is an intensely arresting novel, of fevered, polyphonic voices and interweaving images and stories. It’s a dark, trippy, intoxicating collage of ghosts, of pain and desire and unease, set in a nowhere town awkwardly stuck between life and death. It’s unforgettable.

When I discovered a few months ago that I would be joining the British Council on their Editors trip to Mexico City, I was lucky enough that a particularly well informed fellow publisher recommended Pedro Páramo to me as essential Mexico reading. I know now why she did. Beyond the compelling strangeness of the reading experience, this book is a touchstone in Mexican literature. Before I’d even set foot in Mexico, I had somehow ended up in a conversation about Pedro Páramo with the man sitting next to me on the Heathrow Express (his anecdote was either illuminating or urban-mythical: he claimed to have once sat in a cab in Mexico City with a cab driver who began to recite Pedro Páramo by heart, word for word). And once I got to Mexico City with our group of editors and we began our meetings with publishers, writers and literary experts, I noted how many times it was mentioned, as a key work in Mexican literary history, as an influence on Borges, and Carlos Fuentes, and for García Marquez, apparently the only work that ‘unblocked’ a crippling literary impasse and enabled him to write One Hundred Years of Solitude.

The aim of the British Council’s trip to Mexico is to prepare for The London Book Fair 2015, when Mexico City will be the market focus country. Relatively few books from Mexico find their way into English translation and I wanted to go on this trip to learn something of Mexico’s literature. But how can you go about trying to ‘discover’ the literature of a place as huge and complex as Mexico, especially if it happens to be a place you know embarrassingly little about? And, perhaps even more difficult, how can you try to characterize the literature of that place, to yourself or to others? Should you even try? Valeria Luiselli is one of Mexico’s top young writers.

These questions swam around my head as I juddered through the sky on the flight over to Mexico and began the next novel on my list. I’d come across some positive reviews of Valeria Luiselli before leaving London and had got my hands on a copy of Faces in the Crowd. (It’s translated by Christina MacSweeney; the original is called Los Ingravidos.) What a discovery. Faces in the Crowd is a strange, haunted, self-reflexive novel, its title a reference to that brief, vivid poem by Ezra Pound (‘In a Station of the Metro’). It’s wildly inventive in form, mischievously playing with chronology and perspective and suggesting a possible interpretation of itself at one point as ‘a vertical novel told horizontally’. It’s about loneliness and writing, about creating and living, and cities and apparitions and – ghosts. Again. If Pedro Páramo is an archetypal expression of some of the tropes we might expect to find in Mexican literature — crawling with anguished ghosts, and woozy with a Day-of-the-Dead disregard for the usual barriers between the living and the dead — Faces in the Crowd is a sly, modern, oblique wink to these themes, a postmodern somersault of a novel in which the living haunt the dead and the future haunts the past.

However playful Luiselli’s book is, if someone on that British Airways flight had asked me what my impressions of Mexican literature were so far, a preoccupation with ghosts would definitely have featured in my response. I’d read two completely different novels, from different centuries, and yet I noticed my brain struggling to compare the two, to draw comparisons and find a pattern. Why did it insist on this kind of thinking? No doubt it’s partly just a natural instinct to try to quickly understand something new, but I wonder too if the urge to think in this way about books and literature — to group them in this way; to say ‘Mexican literature is X, or Y’ — is tied up with the way we have to think and work in the publishing industry, where ‘brands’ and ‘pitching’ are an essential part of daily life, and where publishers long to find books whose premise can be explained in a sentence. Jorge Volpi wants to break the cliched perception that all Latin American writing is based in magic realism.

This very issue came up in an interesting discussion our British Council group had with celebrated Mexican author Jorge Volpi. In the mid-nineties he and some fellow writers founded the ‘Crack movement’ to try to counteract the influence of what they saw as the over-simplistic branding of Latin American literature. He wasn’t interested in writing or defining ‘Mexican literature’ and wanted to challenge reductive ideas about the Latin American Boom, and the assumption that Latin American literature and Magical Realism were somehow synonymous. (Incidentally, the name for the ‘Crack’ movement was chosen for purely onomatopoeic reasons; Volpi explained patiently that in his youthful innocence ‘Crack’ had seemed simply like a good name to signify a break from the ‘Boom’.)

Perhaps not surprisingly, Volpi’s most famous novel (which I’m yet to read) is not set in Mexico; it’s about WWII Nazi generals and the history of physics. No doubt it will resist any sort of crass grouping or classifying my lazy brain tries to subject it to, and no doubt many of the Mexican novels I’ll read in the future will do similarly. But certain thought processes and short-hands in describing literature are a necessity in successful publishing, whether you like them or not, and it’s interesting to reflect on the way we respond to fiction in translation, particularly in the run-up to 2015 when we’ll welcome Mexico to LBF as the market focus country.

The way we pitch translated fiction to UK readers sometimes involves a delicate balance between a rejection and a reinforcement of national stereotypes, and the considerations around acquiring can be equally complicated. Something ‘too French’ for example, will be difficult to sell in the UK. But equally, a French book that’s ‘not French enough’ might be difficult: with some notable exceptions, authors of the translated fiction that really makes an impact in the UK tend to be writing about the culture from which they come (so from Knausgaard we learn about what Norwegians really think of the Swedes; from Helmut Koch we see an uncomfortable satire of the upper echelons of upper-class Dutch society; in Houellebecq we see an array of characters who may well not be a representative sample of average French people but are mostly still, nevertheless, French. Etc.)

All of which makes me think about what sort of Mexican books might be successful in the UK in coming years, what sort of fiction might somehow manage to open a window onto Mexico, inspire readers to discover something of the place, without seeming too local or too faraway to resonate with British readers. Possibly the most exciting discoveries will be the novels that genuinely show us something new, those which offer us something about Mexico that we think we know or we’ve seen before, and then turn it on its head.

So I’ll be looking out for more novels like Luiselli’s, which seems artfully aware of the ghosts in its literary heritage even as it bends this tradition inside out. Or like Juan Pablo Villalobos’s Down the Rabbit Hole, which takes a story about a drugs cartel and turns it into a search for a Pygmy Hippo, from the perspective of a seven-year-old. Ultimately I’ll try and keep an open mind, and no doubt the more Mexican literature I read, the less I’ll feel I know about it. But if ‘to know’ in this context means something like ‘to classify’, ‘to contain’ or ‘to simplify’, then perhaps that’s no bad thing.

Anna Kelly is an editor at Hamish Hamilton, an imprint of Penguin Random House UK.

The Cultural Program for The London Book Fair Mexico Market Focus is jointly curated by the British Council and CONACULTA. Please visit www.britishcouncil.org/mexicomarketfocus for more information about the program and upcoming events in both the UK and Mexico.