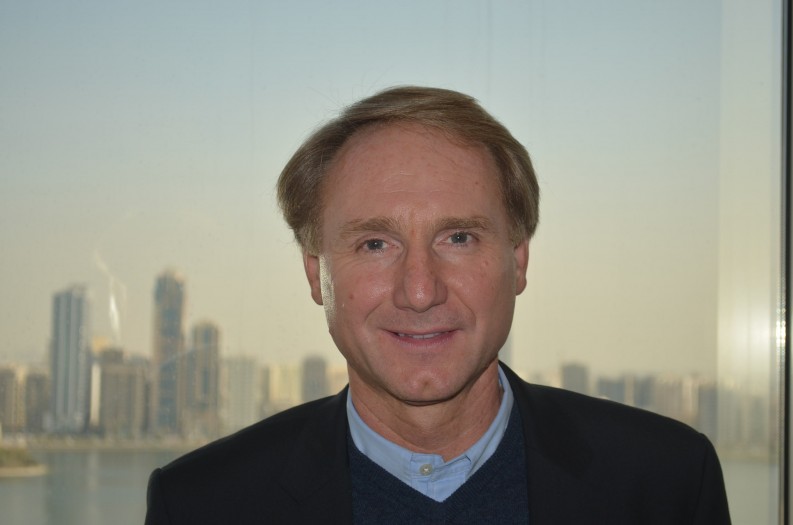 Dan Brown, who was guest of honor at last week’s Sharjah International Book Fair, may be one of the world’s wealthiest authors, able to fly anywhere at the drop of a conspiracy theory, but he had never been to the Middle East before, having by his own admission, “spent so much time in Europe researching Christianity and western cultural history. So, on a personal level I needed to start stepping out in the wider world to learn about other things. That was part of the reason why I came, but of course, I also wanted to meet my Arab readership.”

His appearance at the fair was a huge coup for the organizers, to say the least. Brown is not on the circuit in the way some writers are, and he is a somewhat reclusive author. “I don’t speak often and I don’t go to book fairs,” he explained, before being whisked off to lunch with Sharjah’s Ruler, His Highness, Dr Sheikh Sultan Bin Mohammad Al Qasimi. “Book fairs are wonderful, but my feeling is the best possible thing I can do for my readers, and for the book business, is to write, and if I get caught up going to book fairs and interviews and all that, I don’t write as well and I don’t write as quickly. And I’ve really decided that when I’m in writing mode I’m in writing mode and I just pull the shades and live a very simple life.”

That simple life involves rising at 4am and working through until noon in a room with no access to the Net. He is not opposed to technology, and says the Net has transformed research, but he keeps it at arm’s length. “If I’m writing a scene in a restaurant in Dubai and I want Langdon to pick an item from that exact menu, that’s easy because of the Net. And if I’m some place I’ll shoot some pictures and send them to the person who looks after my Facebook page. But all of that can be an enormous distraction if you let it. There is an addictive quality about technology, and I very intentionally say no, this is a time to write – it’s a very analogue experience.”

I still face a blank piece of paper every day.

Brown believes location to be vital in his novels – “almost the most important character” – so it was obvious to ask him if Sharjah or Dubai might feature in the next book. “Now you’re sounding like a conspiracy theorist!” he said. “I’ve been many places this year, and what a treat to be invited to one of the biggest book fairs in the world. I’m in the research phase at the moment. There will be another Robert Langdon book, but it’s a ways off.

“As far as the writing process is concerned I still face a blank piece of paper every day. The characters don’t care how many books I’ve sold…”

So what is it like being Dan Brown, whose books have now sold 200m world-wide? After all, it’s fair to say that his life changed considerably back in 2003 when The Da Vinci Code was published. “It changed in a whole lot of ways, and in a whole lot of ways it stayed identical. Certainly, from the point of view of my private life, there were dramatic changes. I had to get used to a lot less privacy [and traveling with security from time to time], and when I started The Lost Symbol after The Da Vinci Code there were a couple of months when I became very self-aware and thought ‘the next sentence I write a whole lot of people are going to read,’ and that was a little bit awkward for a month or two. Then I realized that I just have to do what I did before, which is write the book that I would want to read and suddenly it was good and I was able to write freely.”

While in the UAE he was given the whistle-stop tourist treatment, seeing “the world’s tallest building, the world’s biggest crocodile and the world’s biggest shopping mall, and I’ve only been here 24 hours.” His excursion to Dubai also took in the city’s Kinokuniya bookstore in Dubai Mall which blew him away. Appropriately, the store’s circular shape reminded him of Dante’s Inferno, and he described the store was “spectacular, absolutely spectacular,” which the store must surely use in its publicity.

On the Book Trade

When he isn’t in his closed off writing periods, he pulls the blinds up as he puts it, and lets the light in. This includes being aware of book trade issues. “I care about the book trade enormously, for obvious reasons. I want the book industry to thrive and authors to thrive. And it was interesting being at the book store in Dubai and thinking ‘Oh my God, I can’t believe that so many places like this have disappeared. What a crime’.”

But he wouldn’t be drawn on Amazon and was understandably careful not to been seen to be taking any sides. “Obviously I want the book industry to be vibrant. I want authors to survive, I want publishers to survive, I want bookstore to survive. I don’t dive into things too quickly. I don’t feel I have all the information, but it’s an important topic to me. I’m still trying to figure out how it will all play out. I think we’re feeling growing pains. Everyone here loves books and wants everyone to have books and have them quickly and easily, and however that happens I’m sure everybody will eventually figure it out. I’m more the creative guy.”

He is someone on whom success sits comfortably and modestly. Perhaps because such incredible success came to him relatively late, he comes across as a very grounded individual– and frankly, someone more interested in living s quiet life with his wife in the woods in New Hampshire, putting those blinds down and cracking on with the next Robert Langdon adventure. For which booksellers – and his many publishers – must surely remain thankful.