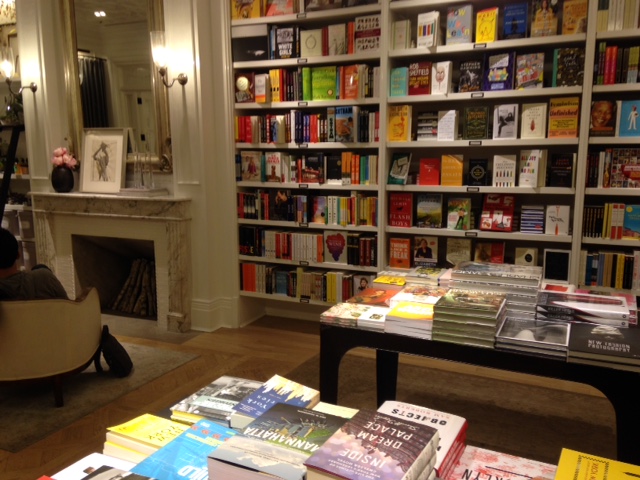 Fashion brand Club Monaco has enlisted The Strand bookstore to decorate its flagship store with books, creating a store-within-a-store.

Walk down Fifth Avenue in the Flatiron district of Manhattan and you’ll see the expected mid to high-end retail storefronts: An Anthropologie and Restoration Hardware over here; a Banana Republic and Ann Taylor over there, and a Club Monaco clothing store tucked in for good measure. But look a little more closely at the Club Monaco and you’ll see there’s a lot going on in there besides on-trend outerwear. In a sharing mentality not unlike a suburban shopping mall, several commodities collide. Toby’s Estate Coffee, a high-end roaster hailing from Brooklyn, is front square and center just beyond the entrance, and just beyond the busy marble and wood-environs of the artisanal cup by cup drip, resides a single room Strand Bookstore. Yes, the Strand Bookstore is in Club Monaco, and they’re serving up culture five ways to sundown.

The room itself looks like something straight out of Elle Décor- a very homey glorious library, adjacent to rooms and rooms of filled up, well, coveted closet space. In direct contrast to the run-down cavernous maze of metal shelving at the Flagship store, this Strand sports floor to ceiling shelves painted glossy white, resplendent with detail molding. Comfortable armchairs are parked in front of a decorative fireplace, and gigantic architectural floral arrangements abound. And of course there are books. Lots and lots of attractive books.

“In the opening of our 5th Avenue global flagship, we wanted to reinforce our status as a true lifestyle destination and bridge the worlds of fashion and culture,” said John Mehas, CEO of Club Monaco. “We first began this online a few years ago, when we launched our blog, Culture Club. The blog is a visual collection of what inspires us based on the tagline of ‘get inspired by what inspires us.’ It visually narrates messages of our cultural pillars: art, music, travel, music, food, and fashion. Last November we took the Culture Club offline into a retail concept. Customers can now shop trends, and pour over books in these categories as well.”

At first, Club Monaco wanted the Strand to display titles that they felt echoed their brand’s sensibility. Think oversized art and fashion books; a lot of design titles. Since then, the stock has varied and the curatorial has become more finessed. “It’s a small shop, so it has to be a book that’s an impulse purchase,” explains Brianne Sperber, marketing manager for the Strand. “Every week we look at what’s there, just like we do in our main store. If a book’s not working, we swap it out.” Predictably, Lena Dunham’s memoir is flying off the shelves, as well as Gone Girl and The Goldfinch. Other popular impulse buys are the lovely cloth-covered Penguin Classics. You can find Kurt Vonnegut, Jane Austen, or a lovely cloth-bound copy of Alice in Wonderland. All of these, while making for good reading, share the Book as Accessory motif. “In this unique space, we want consumers to not just come for the fashion, but also for an education on art and culture too,” said Mehas. “We have created a lifestyle destination.”

Publicists love the option of having events in the combined space. “Celebrity publicists are more in contact with fashion brands than we are,” explained Sperber. “There are millions of people following Club Monaco on all of their social media combined,” (Incidentally, all events are sponsored with co-branding: “Club Monaco and The Strand Presents”.) This past March, Mindy Kaling had an event and 2,000 people showed up. She signed copies of her already-published book Is Everyone is Hanging Out Without Me? Other monthly events have featured René Redzepi (Danish superstar chef), Andy Cohen (TV personality), and artist Enoc Perez.

This isn’t, of course, the first time books have been paired alongside fashion. Jane Stubbs had her time perched in the flagship Bergdorf Goodman, where connoisseurs of high end bibs and bobs could flirt with the aesthetic appeal of rare books. And the Paris-based Aussoline, the largest independent bookseller in France, has long been a leader in fashion publishing; their sensibility holds books in a high regard of “luxury lifestyle accessory.” Maisson Aussoline, the flagship for the brand in London on Picadilly, celebrates its 20th anniversary this fall (their brand extends beyond fashion, and other successful partnerships have been forged with hotels… not surprising, given that a large portion of their 2,100 titles have had a travel focus). The Maison Ausseline is touted on their own website as a “bookstore with benefits.” A bar cozies up to a Bespoke binding service, and furniture is sold alongside accessories. It makes sense that books and fashion would continue to collide across the pond.

“Club Monaco approached the Strand with the concept of a shop-in-shop early in 2013 when we were evolving our New York flagship store,” said Mehas. “We wanted to create a lifestyle destination that had an authentic New York experience and feel. The Strand is iconic to New York. This is their first shop-in-shop with a fashion brand. In the same way Club Monaco mixes vintage items with new styles, so too does The Strand. They merchandise new releases alongside vintage copies. Club Monaco is headquartered in New York, and so much of our inspiration stems here.”

With the holidays fast approaching, shoppers at Club Monaco may find themselves willing to dole out spontaneous book bucks at a fast clip. “During the holidays, we’ve found that people will do their shopping in Club Monaco, and then buy a ton of books because they’re already there,” says Sperber. After warming up with some Toby’s coffee, of course.