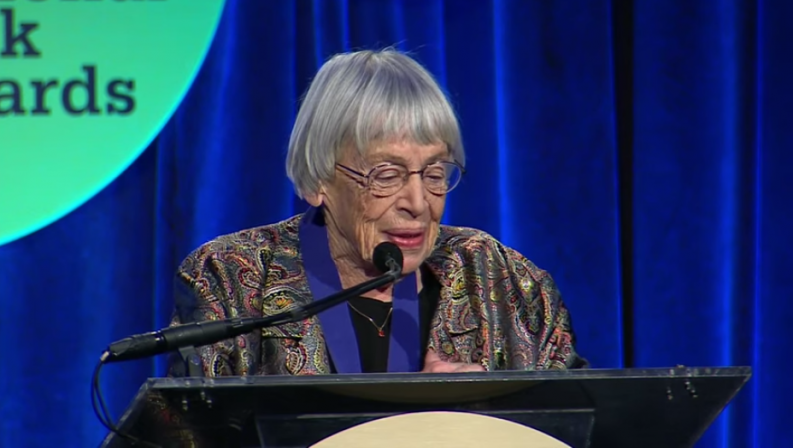 “We need writers who know the difference between the production of a market commodity and the practice of an art,” says Ursula K. Le Guin.

The prize for fiction went to the short story collection Redeployment (Penguin Press), by Phil Klay. The nonfiction award went to Evan Osnos for Age of Ambition: Chasing Fortune, Truth, and Faith in the New China (Farrar, Straus and Giroux). The poetry prize was won by Louise Gluck for Faithful and Virtuous Night (Farrar, Straus and Giroux). And the winner in the Young People’s Literature category was Jacqueline Woodson for Brown Girl Dreaming (Penguin/Nancy Paulsen Books).

But the winner whose speech continues to resonate and had everybody talking was legendary writer Ursula K. Le Guin, who received the 2014 Medal for Distinguished Contribution to American Letters. Among the highlights of her speech, after getting her “thank you’s” out of the way) as found at oregonlive.com:

“I think hard times are coming,” Le Guin said, “when we will be wanting the voices of writers who can see alternatives to how we live now and can see through our fear-stricken society and its obsessive technologies to other ways of being, and even imagine some real grounds for hope. We will need writers who can remember freedom. Poets, visionaries — the realists of a larger reality.

Right now, I think we need writers who know the difference between the production of a market commodity and the practice of an art. Developing written material to suit sales strategies in order to maximize corporate profit and advertising revenue is not quite the same thing as responsible book publishing or authorship.”

At this point, Ms. Le Guin was interrupted by applause, to which she responded “Thank you, brave applauders,” before continuing:

“Yet I see sales departments given control over editorial; I see my own publishers in a silly panic of ignorance and greed, charging public libraries for an ebook six or seven times more than they charge customers. We just saw a profiteer try to punish a publisher for disobedience and writers threatened by corporate fatwa, and I see a lot of us, the producers who write the books, and make the books, accepting this. Letting commodity profiteers sell us like deodorant, and tell us what to publish and what to write.

Books, you know, they’re not just commodities. The profit motive often is in conflict with the aims of art. We live in capitalism. Its power seems inescapable. So did the divine right of kings. Any human power can be resisted and changed by human beings. Resistance and change often begin in art, and very often in our art—the art of words.

I have had a long career and a good one. In good company. Now here, at the end of it, I really don’t want to watch American literature get sold down the river. We who live by writing and publishing want — and should demand — our fair share of the proceeds. But the name of our beautiful reward is not profit. It’s name is freedom.”

To read more about the National Book Awards, click here.