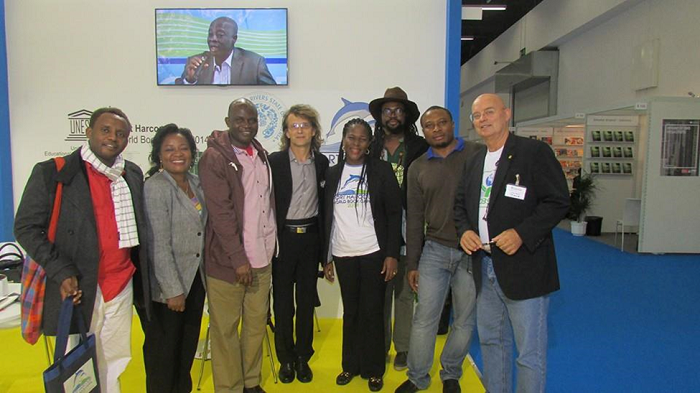 “The West is running out of stories. Africa has in the part largely been insular, so Africa remains the most fertile place to get unusual stories,” said Richard Ali of Parrésia Publisher Ltd during a panel on possibilities for African literature in the emerging world, organized by Port Harcourt, UNESCO World Book Capital earlier this month at the Frankfurt Book Fair. The discussion turned quickly to the politics of publishing in Nigeria, the flawed communications channels between authors and publishers and the generation of Africa writers redefining the literary landscape. On a panel of Nigerian publishing and literature professionals and writers, Billy Kahora, writer and editor of Kwani provided an East African perspective. The publishers on the panel were unified by a strong sense of being the keepers of a new generation of voices. Ali, whose press has recently set up a new pan-African crime imprint with Helon Habila, expressed a sentiment shared by the writers and publishers on the panel: “‘Your words in trust’ is our motto. We wish to hold the words of Africa that were slipping out. We wish to hold it in trust in the future and for now. […] By the mid-nineties, most of the [Nigerian] writers and intellectuals had been driven out, killed, or suppressed. Intellectual culture is an organic thing. Those who had left, had left the country. There was a sense that we had to self-define ourselves. We are heirs to all that had come before, but in another sense we had to set up our own [publishing] houses ourselves.”

But of course, the financial realities of publishing can curb one’s cultural ambitions. Imasuen of Farafina Books, a literary imprint of Kachifo that was founded within months of Kwani, said: “In past year, we have seen how slim our margins are. As much as we want to take risks, we can’t. We want to invest more time in the story. I see that fear. Social media is there, but printed books need to keep coming. The capitol needs to flow back into the arts.”

Where Are the New Voices?

Discovery of new talent is also cited as a problem. To help find new vital voices, Imasuen and Farafina organize workshops every year receiving over 1,000 applications for a workshop for 20 people. Imasuen said: “For many, this is the first time they had their writing acknowledged. He then recalled the moment when he realized that the stories he wanted to tell were valid: “I was given permission to write by one book: Purple Hibiscus [by Chimamanda Ngozi Adichi]. This was me talking.” It gave him the feeling that “my generation was given permission to speak.”

But even a publishing house with its heart in the right place can find itself at the sharp end of criticism. Kahora said: “Kwani just started because it felt like traditional publishers were concentrating on older creative writers—Ngugi [wa Thiong’o]—and the textbook market. But Kwani is already being attacked for being the establishment at [the age of] 10. There will be cycles that are generational in literature.”

Beyond these writers, you see a new generation writing that is doing what can be described as post-modern. Literary fiction is breaking down into genre form, into a mix of things that tries to talk to the online space. As time passes, I think we’ll see an increase in the genre fiction, but with an awareness about literariness.”

Chief N. O. Okereke, President of the Nigerian Publishers’ Association, made a seemingly hopeful statement that caused emotions to flare: “Until Chimamanda broke out, publishers were far away from young writers. The idea of Nigerian publishers not publishing younger authors is not right. Young writers are afraid to approach publishers. They feel defeated before they start. But, he added that “Younger people are getting more courageous.”

As soon as the microphone was handed over to the audience, the tone became heated. Professor and writer Onyeka Nwelue pushed back by saying: “If writers are not coming to you, it is your duty to go to them.” Nwelue felt that the important thing was for publishers to take a stronger role in discovering writers.

Richard Ali then asked Chief Okereke for more transparency around larger publishers, suggesting that the lack of transparency is a hurdle to discovery: “Does Heinemann have an open submissions period? Who are the editors? Who are the agents? I don’t have this information. It is grossly unfair to accuse my generation of not having courage. It’s the opportunities that are not there. We are starting things that are new.”

Perhaps Port Harcourt’s designation as a UNESCO World Book Capital will help the work this passionate generation of Nigerian writers and publishers reach the next level. Koko Kalango, founder of the Rainbow Foundation and Program Director of the Port Harcourt World Book Capital said: “We are known around the world as the oil city. We’re proud that we’re now known as the book city.” As part of the year-long celebration, she has run a number of programs to promote books and reading and the 7-year-old Port Harcourt Book Festival (formerly Garden City Literary Festival) will was held again this year, from 20-25 October.