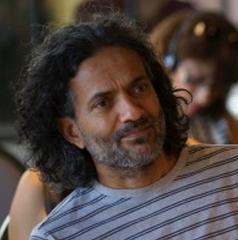 Literary agents Geraldine Rose and Sridhar Gowda of Kadalu recount their experience visiting the leading literary event in Georgia, which was full of surprises.

By Geraldine Rose and Sridhar Gowda

Our trip to Georgia to attend the Tbilisi International Literature Festival started on Wednesday, 10th September. I arrived in Tbilisi, the capital, in the early hours of Thursday morning.  Sridhar was ‘supposed’ to be speaking that morning on ‘The Market for Translated Works in the UK and India’ in his capacity as a Literary Agent, but alas, was delayed.

Tbilisi has been for centuries a crossroads between Europe and Asia, and ‘proof of its long, tumultuous, bloody history of occupation is immediately evident — among other things — in the pastel-colored onion layers of its higgledy-piggledy architecture’ – or so the guide books said! So, I was really looking forward to seeing this beautiful city, especially the old town, which is apparently extremely picturesque. Tbilisi is also famous for its sulphur baths. The hot subterranean water is high in sulphur and other minerals and a long soak apparently leaves your body blissfully relaxed and your skin really soft. Of course, the main reason for attending was translation! I was expecting to find some interesting books for translation and promote our writers that also entailed some financial reward.

However, before we had the opportunity to experience the city, for three days we had the festival programme to attend and to meet and interact with literary agents, publishers and writers and in the evenings a music event by a lake and a dinner at the Presidential Palace.

I met the first of the delegates at the airport, also being collected along with me, Mireille Berman from the the Dutch Foundation for Literature in the Netherlands. We were both tired and pleased to get to the hotel and checked in so that we could sleep. Mireille had a talk to give on ‘Literature in Translation’ later that day so it was important for her to get some sleep.

The next morning I met Ketevan Kighuradze and Sophia Kigura, two of the  organisers of the Festival and was welcomed to Georgia and the literature festival. There was to be four lectures that morning: Mireille Berman, Dimitris Nikou, Sridhara Gowda and Mai Khaled with a coffee break in between.

Dimitris Nikou, a writer and poet from Greece spoke articulately about: the ‘Current Situation of Greek Literary Market/Reading‘. It was interesting to hear him say that there were only two literary agents in the whole of Greece! Writers have to do the agent’s work themselves. The National Book Centre had closed and there were no longer subsidies available, Greek state funding is rare and exceptional, he said.  There is no longer any official book organisation and most activity in this area comes from private funding. Use of Public Libraries has sky-rocketed again since 2009 and, he said, as bookshops were in decline the publishers are using different sales methods, such as selling in book bazaars, flea markets, etc. Writers are publishing short stories in magazines and newspapers. He finished with a quote: ‘Why I write: Because poetry starts from where death does not have the last word.’

Mai Khaled, a writer from Egypt, spoke about:  ‘Literary Testimony: Storytelling is my Fate Since I Became My Own Puppet. ‘ We all enjoyed listening to Mai speak about her writing. She spoke about it in a most engaging way that enthralled and made one wish to read her stories. As a child, she said,  her first concept of the word, ‘novel’ was a ‘movie.’ She said that she wrote because she could do no other, as she had graphomania, the desire to write.

Mireille, from the Dutch Foundation for Literature (Netherlands) spoke on: ‘Literature in Translation.’ She  discussed the Dutch book market and told us how in the 1980s Dutch literature was all but invisible, apart from one or two exceptions. An important turning point in the international success of Dutch literature was when the Netherlands was the guest country at the Frankfurt Book fair in 1993. Since then, the international rights sales of Dutch literature has grown to more than 400 titles a year world wide, while in 1993 there were 275 translations. Dutch author’s receive better reviews and more literary prizes outside the Netherlands than in their home country, she said. She wondered if part of the reason for this was because Dutch authors conform to a general international taste, although awards had also been won by authors writing with a specific Dutch feel.  Mireille’s work involves promotion abroad, collaborating with foreign festivals, supporting good books, not only national, she added. She finished on the note that governments should support art but not have a judgement.

As Sridhar had not yet arrived his talk on: ‘Market for Translated Works in the UK and India’ was re-arranged for Friday.

We had lunch at the hotel and then we were to be given the rest of the day to get to know all of the delegates. We were taken out by bus to the very interesting Open Air Museum of Ethnography – spread over 50 hectares above the Vake Park. It was divided into zones, each depicting a different aspect of Georgian Ethnology. Over 70 buildings have been taken from all over Georgia and re-erected. Each building has its own relevant display of tools and items of everyday life.  In the evening we were taken on to a bar in the old city where we could sample the locally-made red-wine and eat typically Georgian food.

Sridhar arrived in the early hours of the following morning. By then, Friday, it felt like I had been there for a week already! Only two more days and lots to do.

Sridhar gave an interesting talk and slide presentation on Friday morning. He particularly mentioned the dominance of the works of Indian English language writers and how important it was to translate other literary and noted Indian writers. He took plenty of questions afterwards. His last slide was to inform everyone about the Festival of iDeas, an international festival of events by grassroots activists and organisations throughout the world, to be held in December/January.

On Friday night we were invited by the President to a buffet in the Presidential Palace. We were introduced and spoke with him for a while, exchanging back-packing stories. He told us of his travels in Nepal and India and I told him about my back-packing days and how I had met Sridhar in India on a train. Sridhar extended an invitation to him to visit India again along with Georgian writers.

It was noticeable that not many Georgian publishers were present at the Presidents reception. Publishers and educational writers have faced a serious financial blow by the recent Government policy of providing the country’s 650,000 school students with text books free of charge without a prior agreement with the publishers. Authors have been offered one-tenth the royalty of what they would have received from publishers and as publishers had an agreement to supply their text books for 5 years from 2012 they have ended up with large quantities of unsold stock. As many of the Georgian publishers also have printing presses they have been affected by the decision to give printing orders without tenders.  Intelekti Publishing, Diogene publishing, Artanuji Publishing and Logos Press, who are fighting on behalf of the rest of the authors and publishers are eagerly awaiting the next important court hearing on October 3rd.

On Friday we enjoyed the readings from Georgian authors. Erekle Deisadze, a controversial writer, poet and punk musician, who read and played a film clip of his poetry set to music and on Saturday night also entertained us at a musical evening by the Lisi lake with live music and a disco. Erekle Deisadze’s book ‘Saidumlo Siroba’ which came out in 2010 when he was 19 had caused a huge controversy and had enraged religious extremists. We also had a chance to enjoy the local red wine again and to dance in the moonlight before being taken back to the hotel. It was the last night that we were all together.

Saturday, the third day started with Hacer Yeni, a Turkish writer reading her short story which had a philosophical bent and Gvantsa Jobava read the English translation of Georgian writer Irakli Samsonadze.

Salome Makaridze, who read her poetry in the afternoon said even though she had been writing for more than two decades she only decided to publish and read in public recently. Hasmik Simonian showed one of her dramatic video performances of her poetry reading and Zviad Kvaratskhelia read his fiction.

On Sunday we met Beka Kurkhuli, who was a newspaper war correspondent who reports from the conflict areas of Georgia and other regions of the Caucasus, including Abkhazia, South and North Ossetia, Ingushetia, Azerbaijan and the Pankisi Gorge.

Katevan took the remaining four of us out to explore the old city – a labyrinth of narrow streets, delightful cafes, picturesque buildings with wooden balconies and cobbled streets, painted churches, mosques and synagogues. Then the flea markets at Dry Bridge Bazaar with its mesmerising assortment of affordable antiques, jewellery and bric-a-brac and then she introduced us to the Puppet Theatre.

We booked seats for a performance of ‘Ramona’ for that night (this was excellent and well worth the 10 lari) and then we enjoyed a coffee together in the beautiful cafe that was attached to the Puppet Theatre before heading back in the rain, stopping only to see an old church and mosque and the sulphur baths, from the outside. I wished that we had more time but unfortunately we only had that one free day to explore the old city.

We hope to be back again next year and we are sure that by then attendees of this year’s festival will have been instrumental in making the world a richer place by translating the new material they found into Georgian, Armenian, Turkish, Greek, Arabic, Hungarian, English and Indian languages.

Geraldine Rose and Sridhar Gowda are co-founders of Kadalu Literary and Media Agency based in the UK and India.