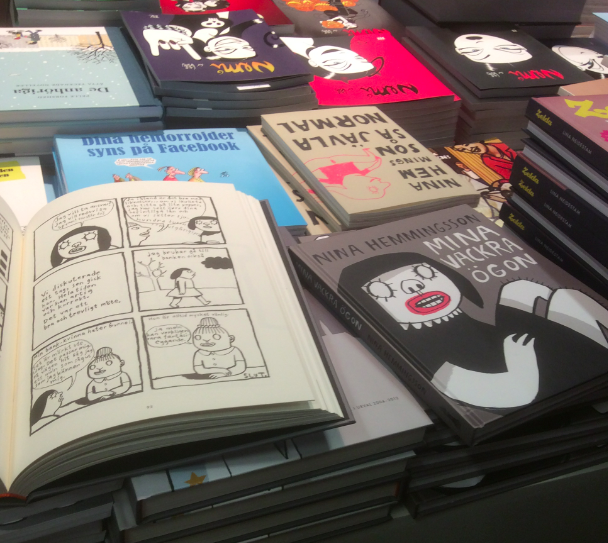 Stands at the Göteborg Book Fair

GÖTEBORG: All Nordic literary events end in dancing. Or so it seems. On the Friday of the 30th annual Göteborg Book Fair (September 25-28), the annual literary magazine Glänta hosted their yearly party, along with the Gothenburg International Film Festival at Pustervik. DJs spun hip hop and brilliant young female rappers Etzia and Rosh performed short, sharp sets. In the early hours of the morning, the ground floor bar at Elite Park Avenue—described by Hela Stan magazine as the place where “the fair’s finest mingle with local half-celebrities, bookworm journalists and, yes, people like you”—was filled with people getting their groove on. Thursday hadn’t been much different. Of course, this isn’t the most important part of a book fair, but this sense of fun and community is irresistible and carries over to every part of the fair.

As every year, the newspapers, free magazines you pick up in cafes, venues and book lovers rally around the biggest book fair in the Nordic countries. Amazon may have just crept onto Sweden’s shores, bookshops may be facing the same challenges as in many places, and the industry may be being squeezed in the middle, but it’s easy to think that everything will turn out OK when you can barely move for the book-buying crowds on the fair’s floor. Featured were Siri Hustvedt, Desmond Tutu, John Ajvide Lindqvist, Tatiana de Rosnay, David Grossman and more, and the guest of honor was Brazil. This year, 97,133 visitors turned up (a smidgen of an increase on last year) to explore books from 46 countries, 822 exhibitors and 3,254 seminars and events.

Some of the best events were only twenty minutes long. John Ajvide Lindqvist, with his new novel Himmelstrand, discussed the dark heart of one of Sweden’s great schlager lyricists and composers that ended in Lindqvist singing a little ditty himself. Novelist Philip Teir and academic Ebba-Witt Brattström discussed Tove Jansson’s keenly observed short stories for adults (collected in Meddelande/Message, with an introduction by Teir, published by Schildts&Söderströms) and her contributions to LGBT literature in Finland. This was part of a larger celebration Jansson, who would have been 100-years-old in 2014. Copies of Cirkeln (The Circle, Raben Sjögren 2011), the wildly popular first part of a YA trilogy about witches and the apocalypse, sold out at the Science Fiction Bokhandeln (“bookstore”) stand, perhaps because it’s coming out as a film in February 2015, as did a collection of modernist poems and aphorisms by the late Edith Södergran. Was it the low price point of 45 kronor? Is she having a resurgence in popularity? The person at the Svenska Literatursällskapet i Finnland stand wasn’t sure — but they would have brought more copies if they would have known it would be so popular. Books on display in Göteborg

The Man Who Left His Publisher for an Agent

One of the news stories of the Göteborg Book Fair was about Sweden’s most-read author Fredrick Backman’s decision to publish his latest feel-good novel Britt-Marie Was Here with the Partners in Stories, an agency that had always had acting as a publisher as well in their sights, instead of Albert Bonniers. The novel is about Britt-Marie who leaves her 40-year long marriage and life as a housewife and becomes the football coach for a league in a backwater in an unremarkable small town. According to a Dagens Industri article, Backman explained his controversial decision: he may very well sell fewer books with Partners in Stories, but he’ll be able to develop his craft with them and be more involved in things relating to being an author. Considering the Swedish Arts Council presentation on the book market in Sweden, perhaps the move is a sign of the times. Signing line for author Sara Stridsberg at the fair.

Hot Titles from the IRC and Beyond

Turning our attention to the International Rights Center, here’s a selection of fiction that caught me eye.

Bonniers Rights was excited to bring Martin Holmen’s Clinch to Frankfurt, part one in a thrilling trilogy about a bisexual former boxer scarred by poverty and alcoholism earning his living as a bailiff and who is wrongly accused of murder. Ida Linde’s You Travel North to Die (Norstedts Agency) is a dark literary tale of a killing spree in Northern Sweden is being compared to David Lynch and Bruce Springsteen’s Nebraska, and sounds like something for fans of Bonnie and Clyde and Natural Born Killers. Another tip from Norstedts is Håkan Bravinger’s Just Before We Fall a simmering literary novel about the unexpected chain of events that unfolds after a psychiatrist confides in a stranger on a plane heading for Cape Town. One of Sweden best novelists Sara Stridsberg’s new, heartbreaking novel The Gravity of Love: An Ode to My Family is about the impact of mental illness on a family and is one of the Hedlund Agency’s main titles. Another literary title that caught my eye is Mara Lee’s Future Perfect is magical realist tale of love, being an outsider in a small Swedish village and envy. One debut I can’t wait to read is medical student Negar Naseh’s experimental, literary novel All This Winter, represented by Partners in Stories, which tells of a complicated mother/daughter relationship and is supplemented by the author’s own writing journal.

One trend that could be discerned from the seminar program was feminism in Sweden. Sweden generally has a robust feminist debate rooted that seems in many ways to have succeeded in de-gendering the conversation about equality, but with the surge of the feminist conversation in English-speaking markets, it’s worth taking a closer look at what Sweden is doing in this field. I’ll make passing mention to Katrine Marcal’s forthcoming Who Cooked Adam Smith’s Dinner?, a popular non-fiction book about economics and women coming out next March with Portobello Books. I don’t want to let the fact that I translated it undermine my argument, but I do think it’s indicative of the lively thought around the topic—and its popular approach lines up with the enthusiastic reception of Caitlin Moran, which wasn’t necessarily a sure bet in the Swedish market. Looking at the comics section of the fair, UK commuters will all know cynical goth chick Nemi, and if they like her, Nina Hemmingsson’s sardonic comics about love, beauty and relationships are worth picking up. I was also struck by Elin Boardy’s and Amanda Svensson’s discussion about their novels, both of which are themed around pirates and women. Boardy’s novel (The Story of Mary Jones, Wahlström&Widstrand) is a Treasure Island story set in a pub from the perspective of the kitchen maid, and Svensson’s (All Those Things I Said To You Were True, Norstedts) takes a playful, lyrical approach to story of the cross-dressing pirate queens Anne Bonny and Mary Read by telling a tale of two friends at an MFA program in the Swedish countryside yearning to taste love. Both books explore identity, power, and the masks of reality. Welcome to Sweden actress, writer and producer Josephine Bornebusch’s debut humourous YA novel about a confident 16-year-old girl Född Fenomenal (Born Phenomenal) who is obsessed with Anne Frank and the Second World War. It’s a story about a girl who distinguishes herself for her intelligence, will and confidence (The anti-Bella Swan?), and about how a pair of jeans paves the way for a journey to Amsterdam.

The media has already begun discussion the choice to feature Hungary as the guest of honor at next year’s Göteborg Book Fair. Göteborgs Posten questioned the choice, noting the country’s conservative politics and its anti-democratic tendencies. The fair’s director Maria Källsson looks forward to the addressing these topics openly in the fair’s program next year. Péter Esterházy is confirmed as a key guest and the program is being curated together with the Balassi, the Hungarian cultural institute.

Other highlights will be sub-themes on Voices from Iceland and freedom of speech and of the presses. The 2015 fair will take place from 24-27 September.

Saskia Vogel is a Swedish to English translator and the co-founder of Dialogue Berlin [dialogueberlin.com], an international collective of communications strategists. @saskiavogel