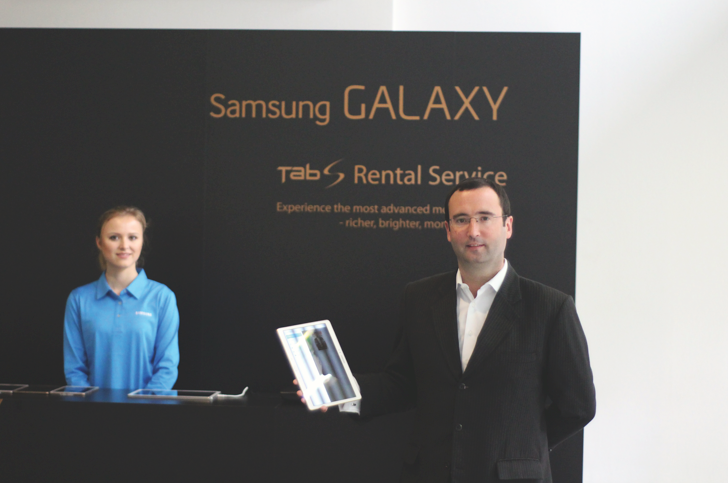 Samsung, the 2014 Frankfurt Innovation Partner, is searching for collaborators to help them showcase their cutting-edge products. In the context of Frankfurt, the Korean technology giant is “here to learn,” according to Rory O’Neill, Marketing Director for the European Telecommunication Operations of Samsung.

“We’re looking to create the most compelling experiences on the hardware we can, and the people who can do that are here in Frankfurt.”

This might be everything from hardware optimization to mobile apps, or someone who can run a book club on Facebook.

Samsung’s marquee relationships in the book space include its deal with United States bookseller Barnes & Noble to produce Nook-branded tablets and its collaboration with Marvel Comics—which offers its Marvel Unlimited app free to use for Samsung Galaxy Tab users and is developing an immersive version of Tony “Iron Man” Stark’s lab for viewing on Samsung’s new Gear VR 3D headgear (“It is a totally immersive experience,” notes O’Neill).

The company—which has sold 200 million Galaxy smartphones since 2010—is seeking out those who can create “meaningful innovation,” with a particular emphasis on how digital natives will use Samsung’s products in the future.

“Kids who are digital natives don’t think of something as a smartphone, but just as a phone, just as they don’t think of a digital camera as anything other than a camera—they don’t know the difference,” says O’Neill. “This is going to make a big difference in the future. Think of it: when these digital natives enter the workforce, they will not likely be communicating through email, but through social networks. Corporate training, as it is now, will disappear and instead will operate through something similar to Vine and YouTube.”

But why work with Samsung, when there are so many start-ups, platforms, and other digital players with whom to collaborate?

The answer, says O’Neill, is simple:

“Ultimately, in the future, mobile is going to the first point of contact for any new content. With us, you have a marriage of the hardware and the software, the physical and the digital, which all come together to deliver a superior experience.”