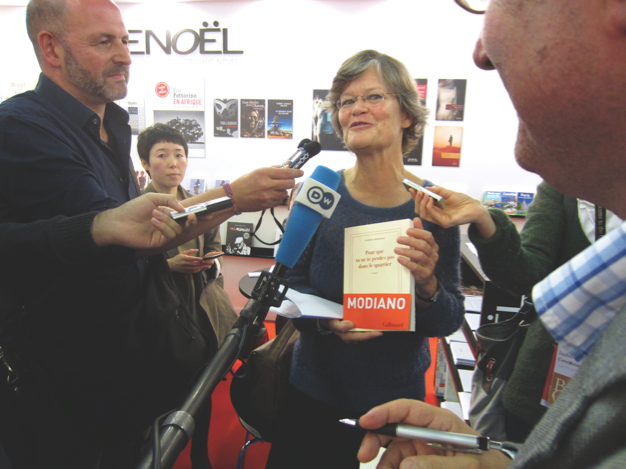 By Olivia Snaije and Andrew Wilkins

The 2014 Nobel Prize for Literature has gone to French author Patrick Modiano. Anne-Solange Noble (pictured above), the rights director for his publisher, Gallimard, said “He is one of our leading authors who we have been publishing since 1968. He has been translated since 1968 as well. He is a magnificent writer.”

Characteristically opaque, the Swedish Academy acclaimed him “for the art of memory with which he has evoked the most ungraspable human destinies and uncovered the life-world of the occupation.” He is the 15th French author to win the Nobel Prize for Literature.

Gallimard wasn’t the only publisher celebrating yesterday. Know that moment when your impeccable foresight and taste is finally vindicated? John Donatich at Yale University Press experienced it in Hall 8.0, when he discovered that a French title he had bought English rights to was now by the winner of the 2014 Nobel Prize for Literature.

“We acquired Modiano’s novel Suspended Sentences a couple of years ago. I’ve always been a fan of his. He’s just the kind of author we want on Yale’s list: very important to his own language; unknown in English.”

The title, translated by “master translator” Mark Polizzotti, is now being rush-released. The print run would have been 2,000 copies, but now? Donatich thinks between 15,000 and 20,000 for starters.