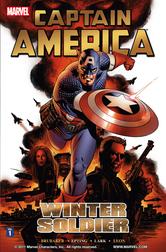 Dozens of Marvel comic book series are now available on Kobo’s digital reading platform. Titles such as Captain America: Winter Soldier Vol. 1 and Infinity Gauntlet are now available for purchase at Kobo.com, giving “fangirls and fanboys a universe worth of exciting Marvel Comics.” Readers can read these illustrated ebooks on Kobo devices, such as the full-color Kobo Arc 10HD Android tablet, or via free reading apps available for most popular tablets and smartphones.

“For more than 75 years, Marvel has been transporting comic fans to exciting new galaxies,” says Santiago Melo, Merchandiser, Kobo. “Tackling big issues with larger than life characters, these stories continue to be a constant source of enrichment in our popular culture and we couldn’t be happier to welcome them to the Kobo family.”

“Marvel is excited about our partnership with Kobo and happy to have the opportunity to provide fans, new and existing, another great way to experience our legendary content,” says David Gabriel, SVP Sales and Marketing for Marvel Entertainment.

“Many of those titles are tied to popular franchises with established fan bases, like The Avengers and Guardians of the Galaxy, so the move probably doesn’t herald a seismic shift in the outlook for fixed-layout and illustrated ebooks.

Still, it’s a modest vote of confidence in the format on Kobo’s part, not to mention an expanded play in a field dominated by ComiXology, which was acquired by Amazon earlier this year.”