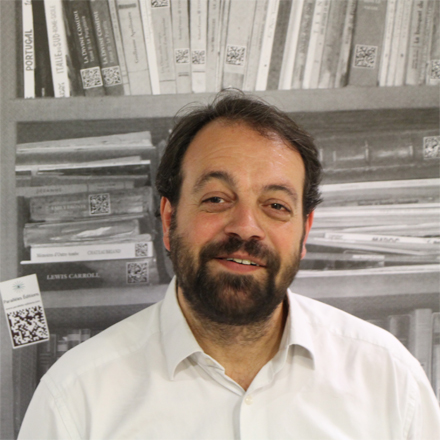 The Labo de l’edition collaboration space is sponsored by the city of Paris.

At Labo de l’edition, a co-working, networking and training center in Paris,  professionals working in ebooks and digital media collaborate on new projects.

In 2011, in response to a demand from a small group of booksellers and others in the publishing community who saw the arrival of e-books with much trepidation, the city of Paris launched a unique initiative: the Labo de l’edition, where a positive collaboration between the traditional and the innovative could happen; a place where people could learn about digital publishing. An association called the Paris regionlab, which also runs close to 15 other “laboratories,” providing assistance and encouragement to innovative startups in various sectors, oversees it. Until last summer Virginie Rouxel, a former editor and then foreign rights manager for Hachette Littératures, was the Labo’s managing director. After three “intense” years, she decided that “it was a natural moment in the cyclical evolution of the Labo” to move on. Nicolas Rodelet, who worked with Rouxel from the start, is now running the Labo, which has grown to encompass new media. (A community of 5000 people follows the Labo on social media.)

Smack in the center of Paris not far from the Sorbonne, the Labo is installed over two floors of a building owned by the city of Paris. Rodelet says that one of the Labo’s missions is to encourage the entire “ecosystem” of the book industry—including, of course, ebooks.

“Since the Labo de l’edition was aimed at a sector that is in crisis, we wanted it to be as open as possible. Upstairs is where incubation happens, downstairs is for the public. It is a place teeming with ideas, creating networks, businesses and startups.”

In the co-working office space upstairs the system is changing somewhat: people used to buy day tickets and there were 20-30 people at a time working together. “It was very nomadic,” commented Rodelet. “Now we are aiming for residencies where we select people according to projects that are linked to our activities.”

Rodelet says that the Labo will soon be hosting five or six projects at the same time. “We try to adapt to an ever-changing environment; companies are no longer the same as they were three years ago.”

In this sense, the Labo is moving towards including media as well as publishing ventures. “With the evolution of the sector the borders are disappearing between publishing and other areas. Now it includes audiovisual, media, interlinking, gamification with applications or ebooks and Epub3. All this is pushing us towards a larger range of startups and partnerships,” said Rodelet.

The Labo is in partnership with several companies including Google and is about to sign with a major press group as well as a trade magazine. Rodelet says the enterprise has been entirely successful barring the disappointment that major players in the publishing world such as Hachette, or Editis have not yet joined as partners and are still sitting on the fence. “They remain prudent about ebooks,” noted Rodelet. US publishing consultant Bob Stein is among those who have given workshops at Labo de l’edition.

This doesn’t mean that publishers aren’t paying attention to the Labo, and the French Publisher’s Association (SNE) is on the Labo’s board. The conferences and events that are held on a weekly basis are well attended by professionals both in traditional publishing as well as in startups. A few recent events included a writing workshop with a tool called Draft Quest, a conference on collective writing, and a debate about the link between authors, publishers and self-publishing which will include the publisher Michel Laffont and Amazon France.

The French Society of Authors (SOFIA) and the National Book Centre (CNL) sponsor training sessions on new technologies that might include subjects such as coding e-books, or how to create a community of readers via social media networks, and each month a master class is held with an entrepreneur who comes to tell their story.

“Everything is in place now,” said Roudelet. “Today we don’t have to go look for partners and projects; people come to us.”