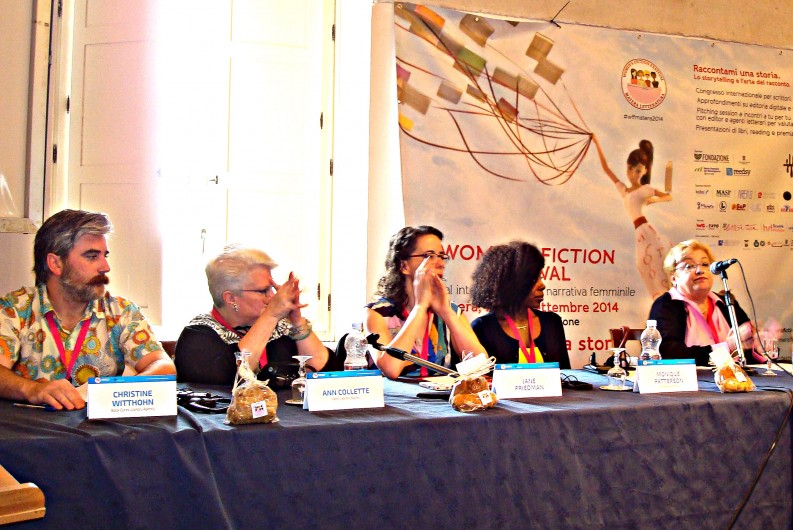 After eleven years of uninterrupted success, the Women’s Fiction Festival in Matera – four days at the end of September, it closed on the 28th – has proven once again that it is unique in Europe.  It combines the best of American writers’ conferences and Italian literary events, drawing together the business side of publishing —literary agents, editors, translators and publishing gurus — with the creative side, both established writers and newbies, coming from Europe and America. And it manages to do this without turning into a mega, unmanageable event.

This year it was sold out. But it meant that only about one hundred lucky few made it, and for aspiring writers, it was a perfect occasion to pitch their work at agents and editors coming from the US, the UK and of course Italy.

Small size is just one of the keys of the Festival’s success. The other is Matera itself, a UNESCO World Heritage site in Southern Italy, famous for its “sassi,” hundreds of cave dwellings. Some have even been turned into charming hotels though the “modern” town with its baroque churches and palaces may prove more comfortable to the less adventurous. The Festival is held in a highly suggestive environment, “Le Monacelle”, an ex-convent dating to the 16th century and restored in 2000. And that is surely yet another reason for success. The convent’s numerous reception rooms are all open to Festival participants, including a cloistered patio and a vast terrace with a fantastic view over the old town. A magic place! So much so that it has just been named by the European Commission to be “Europe’s Cultural Capital” in 2019, beating all sorts of other rival Italian towns, including Lecce and Perugia. A Festival Born out of Friendship

What however makes the difference is the original “business model” followed by the Festival. First conceived as a writers’ retreat, it quickly morphed into a sui generis conference. It all began with a “telephonic friendship” between author Elizabeth Jennings who lived in Matera and Maria Paola Romeo who was then editorial director at Harlequin Mondadori in Milan. As Elizabeth Jennings explains it, they were “chatting and talking about establishing a writer’s retreat in Matera, which is quite beautiful and quite conducive to writing.” But in so doing, they both brought their experience and contacts to bear with the result that Matera turned into a special meeting place for the literati on both sides of the Atlantic, something truly unique.

Elizabeth Jennings is a successful romantic suspense author who constantly travels to the US, attending major writers’ conferences. Maria Paola Romeo has moved on from Mondadori and has become one of the most successful literary agents in Italy and now founder of a fast-growing digital publishing house Emma Books focused on women’s literature in both English and Italian. Founded in 2012, Emma Books saw the light at the Festival and acquired that year L’Amore è un Bacio di Dama from Elisabetta Flumeri and Gabriella Giacometti, a book that has been incredibly successful and has sold worldwide, including in the US.

The result of the founders’ efforts was there for all to see at this 11 th edition of the Festival. From America, major figures of the publishing world turned up. Among them, publishing gurus like Jane Friedman, the co-founder and publisher of Scratch, a magazine about writing and money, and former publisher of Writer’s Digest, David Gaughran, author of the bestselling Let’s Get Digital, and more recently, Let’s Get Visible, both indispensable guides for any author considering self-publishing; Marylin R. Atlas, an award-winning film producer with among her credits Real Women Have Curves for HBO; editors from big publishing houses, like Monique Patterson, executive editor at St Martin’s Press and Carrie Feron, Senior Vice President and Executive Editor at HarperCollins; literary agents like Ann Colette from Rees Literary Agency and Christine Witthohn, Book Cents Literary Agency; indie authors-turned-stars like Bella André, Tina Folsom and Debra Holland that, between them, have sold several million copies of their books worldwide.

When Bella André explained that she used fifteen marketing consultants to promote her books, there was an audible gasp in the audience. But as German author Beate Boeker remarked later, this is perhaps not so surprising if one considers that she is basically “running her own publishing house,” noting Andre has sold some two million copies across several languages and has thirty titles to manage in a range of markets and platforms, from Amazon to Kobo.

Europe provided the counterpoint, with Maria Paola Romeo, both a literary agent and a digital publisher, and a series of star agents like Andrew Lownie from the UK and Laura Ceccacci from Italy; top editors from all the major Italian publishers, Giulia Ichino from Mondadori, Gemma Trevisani from Rizzoli, Alice Di Stefano from Fazi and Francesca Lang, from Piemme, as well as best-selling writers like Jane Corry (UK) and several Italian authors including Elisabetta Flumeri, Gabriella Giacometti, Stefania Barzini and many more.

Other rising figures of the new digital world of publishing were also present, including Ricardo Fayet from Reedsy, a new startup focused on providing a platform for self-published authors looking for professional editorial and marketing services; Camille Mofidi, head of the European Writing Life at Kobo and Alessandra Tavella from Amazon Kindle Italy, who based in Milan.

In fact, the Festival has a fully Italian/European dimension that runs in parallel in various other venues, including Palazzo Lanfranchi and in the Casa Cava, down among the “sassi” where a literary prize, Premio Baccante 2014, was awarded to best-selling Spanish author Clara Sànchez who had won the 2013 Planeta prize for her novel El Cielo Ha Vuelto.

This year, exceptionally, the German publishing contingent had not turned up as it usually does. But the Italians did, and rightfully so: the Festival is the only writers’ conference in Italy that has space for editors and writers to meet – and they do so every afternoon, only mornings are dedicated to panel discussions and presentations.

The translation booth in the Festival’s main hall is both a symbol of its uniqueness and an unusual sight, more reminiscent of a United Nations meeting than of a writers’ conference. Besides providing translation to anyone who needs to follow panel discussions in either language (English and Italian) – the interpreters are excellent (I checked, the level is highly professional ) – it is also a great way to hear what is being said whenever the acoustics fail as people inevitably (and noisily) move about.

The Rising Importance of Women’s Fiction in Europe

The Festival has grown over the years in line with women’s fiction – the latter becoming ever more important since the advent of digital publishing where romance is the top selling genre. And the Festival has introduced on the European continent the concept of talent scouting with concrete results in terms of aspiring writers finding agents and publishers ready to publish them. A recent example is Cristina Cassar Scalia, a young Sicilian ophthalmologist whose first novel, The Second Summer, a moving love story set in Capri, attracted the attention of a Sperling and Kupfer editor at the Festival in 2013. Nine months later, her book was available everywhere in Italy and is soon coming to France.

Other recent and bestselling authors discovered at the Festival include Giovanni Ziccardi, a professor of digital law, with L’ultimo Hacker; Giuseppina Torregrossa ,a gynecologist, with Il Conto delle Minne; Gabriella Genisi, whose mysteries with La Commissaria Lolita (with recipes!) is about to be made into a TV series.

The relaxed, intellectual atmosphere was something Jane Friedman told me she welcomed – the kind of thing that makes one want to return to Matera. David Gaughran, who was there for the second time, confirmed to me that what he liked was the fact that the gathering was small and you could meet everybody and that you were exposed to a lot of information – what was “good this year is that more authors are talking, even if few editors actually stayed in the room to listen, for example, to Bella André. No doubt, even in Matera, self-published authors have still a way to go.

In discussions I had with Maria Paola Romeo and Elizabeth Jennings, the Festival’s founders, it became obvious that both realized how much they had achieved and that, in a sense, the Festival was now at a crossroads: it could grow more, even exponentially, the demand was there, or it could deliberately choose to remain small and “intimate.” As an outsider and participant in the Festival, I am in no position to pass judgment but the advantages of intimacy are clear.

There is perhaps no equivalent anywhere in the world for establishing one-to-one contacts between publishing professionals and writers. There is also no other place where Americans can “inhale” the European literary scene and Europeans likewise learn about American “best practices.” In fact, Elizabeth Jennings indicated that next year, the focus would probably move from discussing changes in the market place to discussing elements of the writing craft, though both aspects are likely to be covered. The cross-pollination is fertile and it is so mainly because the event is small. To make it larger, as Elizabeth Jennings argued, would mean to abandon the attractive “Monacelle” building and the flexibility of its numerous rooms that are all open to participants, from the breakfast buffet in the old patio lounge to the farewell lunch on the terrace overlooking Matera – each one of these, perfect occasions to jumpstart networking, something that can happen only if the gatherings are limited…small is, indeed, beautiful!