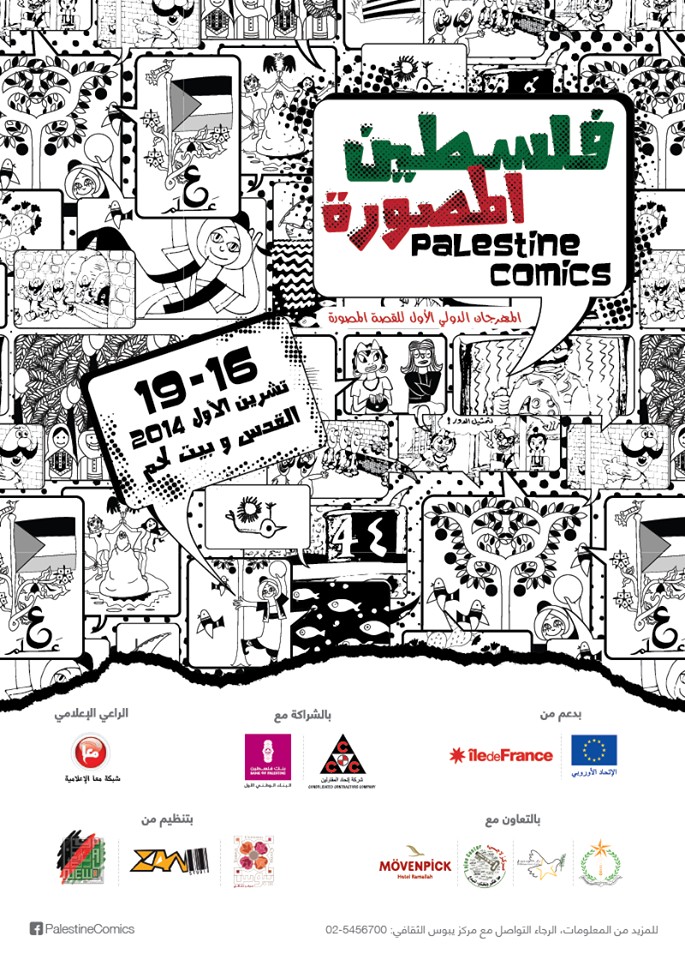 Strips from the first Palestine Comics Festival on display.

In a region that is not lacking in dark humor, the first Palestine Comics festival kicks off today in East Jerusalem and in the West Bank. In a region that is not lacking in dark humor, the first Palestine Comics festival kicks off today in East Jerusalem and in the West Bank. International and local cartoon artists will be present including Canadian graphic novelist Guy Delisle, who won the 2012 best comic book award at the Angoulême comic festival for his travelogue Jerusalem: Chronicles from the Holy City and Amer Shomali, whose animated film, The Wanted 18 was presented at this year’s Toronto Film Festival.

Funded by the European Union, among others, the festival’s goal is to promote new talent and encourage cartooning in Palestine. An exhibition in Bethlehem’s Manger Square by participating cartoon artists will include work by Baha Boukhari, a political cartoonist for Ramallah-based Al Ayyam newspaper, architect and cartoonist Samir Harb, and Yara Bamieh, an architect, graphic designer and illustrator. French cartoonist Maximilien Le Roy, who in 2009 published a graphic novel about Gaza, and a year later a book about the wall in the West Bank, will conduct a beginner workshop in the Aida Refugee Camp on Saturday. Journalist and comic script-writer Albert Drandov will give a talk about his work and experience on the closing day this Sunday.