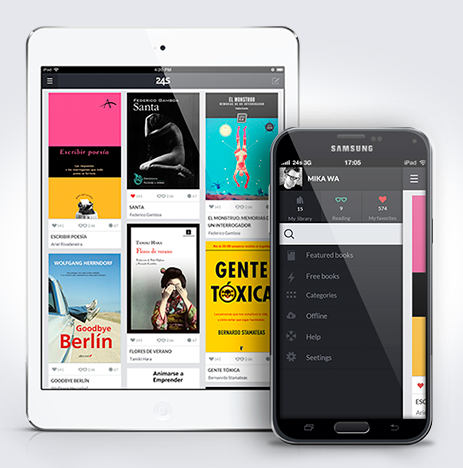 You might not remember back that far, but ebook subscription services have been around for since the turn of the millennium. The Madrid-based company 24symbols was, arguably, there first—well before anyone else—and they launched in the midst of a terrifying financial recession that left nearly half of Spain’s youth unemployed and the publishing industry in a free fall.

Now, four years later, they are still here, and co-founder Justo Hidalgo is busy hustling his small team around the globe to work on new partnerships and launches, trying to outpace Kindle Unlimited, Scribd, Oyster, Bookmate, and other competitors.

The key to this business, it seems—as with Bookmate—is to launch in underserved markets. “Our competitive advantage—aside from our four years of experience, analytics and technology development—is that we can offer the service in places where it is difficult to access books, either because there is no Amazon or no credit cards,” says Hidalgo.

The company recently launched the service in Guatemala in partnership with mobile phone provider, Tigo, under the Smartbooks brand; earlier this year, Russia’s Beeline mobile phone partnered with 24symbols to launch Beeline Books. A launch in Colombia is next, with France and Germany coming thereafter. “By the end of the year, we should be in eight countries, at least, ten if we’re lucky,” says Hidalgo.

What was the catalyst for all this growth? In 2013, 24symbols received investment funding and a distribution deal with the Spanish company, Group Zed—an international media company who now sells 24symbols as a “white label” service to mobile providers around the world.

Of course, the big question is whether or not subscription services like 24symbols can continue to compete, especially now that Amazon has gotten into the game. “Subscriptions services have attracted the big guys, but we are, at the moment, in the innovation cycle when things look undifferentiated. This will evolve over time. We believe we have the best technology in terms of cloud reading right now, but of course Amazon can catch up very quickly. Of course, we have a four-year head start in analytics, and we have evolved our tools and will continue to evolve them.”

He notes that in many countries—notably Italy, Spain, and Latin America—the 24symbols contract is far more attractive than what Amazon is offering.

“Today is a critical moment for publishers. Since 2010, our ‘friends from Seattle’ have caused many complaints. If publishers sign an exclusive agreement with Amazon now, they will be complaining for another five years. If they open their minds to finding the best service, they may find they have another opportunity. Oyster, Scribd or [24symbols] may not be able to offer as many things as Amazon short-term, but you’ve seen what happened with the short term.”

Hidalgo adds, “Right now, it is a matter of knowing who is going to be alive in two years’ time; we have been able to survive for four years when no one thought this would work.”

Justo Hidalgo was a speaker at this year’s Frankfurt Book Fair CONTEC conference, serving as a judge and speaker for the “Hug the Alien” program.