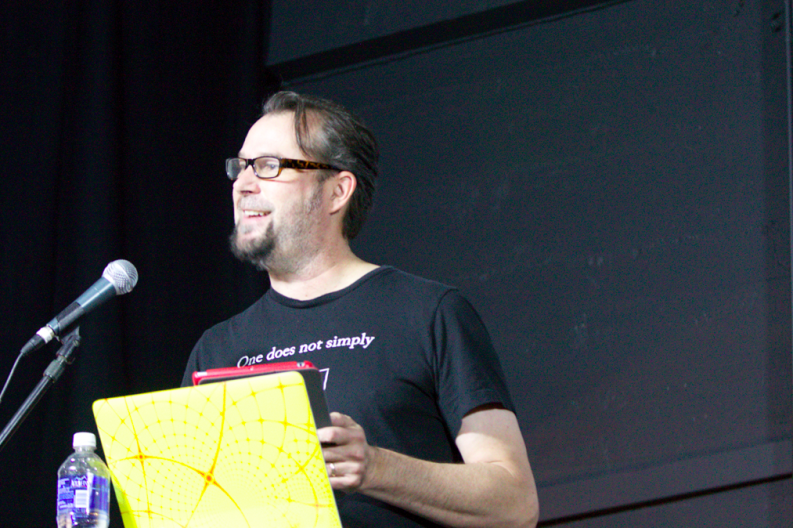 During the second day of Books in Browsers 2014, several speakers addressed the issue of how authors create documents, the implications of working different formats, and which format is best for which type of content. John Hammersley, cofounder of WriteLaTeX, speaks at Books in Browsers 2014

John Hammersley is the cofounder of WriteLaTeX, a collaborative authoring tool for academics working in LaTeX, a type-setting system specifically for scientific and technical documents. “You can spot a LaTeX document in a pile of Word documents,” said Hammersley in his Books in Browsers presentation, because of the superior formatting, particularly for math formulas, tables, cross-references and citations. But for non-coders, he said, it’s hard to use. “What’s really important is providing a user interface,” which Hammersley has done with Overleaf, a visual editor that outputs LaTeX documents. Adam Hyde of Book Sprints speaks at Books in Browsers 2014

Adam Hyde of Book Sprints advocates HTML as a scholarly format over the commonly used Microsoft Word. “Word is a problem,” said Hyde, and we have to figure out how we can easily help authors shift to HTML. Hyde and his team have created a converter that will transform messy Word documents into HTML, and a visual HTML editor that is easy to use for coders and non-coders. Writing in HTML produces a flexible document that can be viewed online or, using Hyde’s converter, exported into other formats like PDF and EPUB. Book Sprints is also working on an HTML spec that will define HTML elements for scholarly articles. Micah Bowers, BlueFire Productions and Readium, at Books in Browsers 2014

Michah Bowers and Patrick Keating from Bluefire Productions and Readium advocated for the wider use of EPUB3 as the standard for ebooks in the browser. The format is open source, and standard design tools like Adobe InDesign will now output to EPUB3, with interactive elements, fixed and responsive layout. The Readium extension for Google’s Chrome browser will render EPUB files in the browser and has hit its 1.0 iteration. As Keating said in concluding his talk, when the tools for creating EPUB3 become easy for designers to use and tools for rendering these files are easy to use, the creation of the file becomes, not a challenge, but a workflow. Using a more improvisational approach, John Maxwell and Haig Armen of Simon Frasier University presented the results of a workshop they in June with 11 writers, the goal of which was to create a work of digital fiction using the Open Web Platform. which produced The Last Cartographer. What they found was that the existing tools for creating ebooks limited the results to a set of pre-determined templates. The tools you use inform the structure and design of the end product (Adobe DPS, Inkling, iBooks Author, etc). Certain templates and designs are so ingrained in these tools, said Haig, that “to get beyond them takes a lot of work.”

“We set out to do digital fiction, but we ended up doing a lot on paper,” said Maxwell of the workshop.

They also came to the conclusion that improvisation and creation requires people to have a certain level of proficiency with the tools they are using. Composing requires “an abstracted mentality,” said John, and “if digital fiction is going to be a widespread art form…we have to be able to play with it.” Instead of building tools for authors to write, John and Haig suggest that we should be building tools that allow authors to build their own tools. How do we encourage improvisation in the digital space, rather than just designing and running the content through a specified workflow? This is a question they intend to answer.