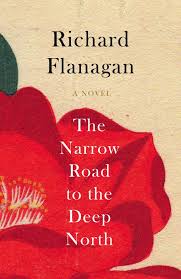 The 2014 Man Booker Prize was awarded to Australian Richard Flanagan for his novel The Narrow Road to the Deep North. Even though this was the first year that Americans were allowed into the competition, this year’s Man Booker Prize was awarded to an Australian, for his novel The Narrow Road to the Deep North.

The book, named after a travel sketch by the Japanese poet Basho, centers on the story of surgeon Dorrigo Evans in a Japanese POW camp on the now infamous Thailand-Burma railway.

The Chair of Judges, Philosopher AC Grayling said in a statement:

“The two great themes from the origin of literature are love and war: this is a magnificent novel of love and war. Written in prose of extraordinary elegance and force, it bridges East and West, past and present, with a story of guilt and heroism.

“This is the book that Richard Flanagan was born to write.”

He went on, telling The Guardian:

“It’s not really a war novel, it is not about people shooting one another and bombs going off, it is much more about people, their experience and their relationships. What’s interesting about it is that it is very nuanced, as if everyone on the Burma railway, both sides of the story, were victims.”

The Narrow Road to the Deep North was inspired by the life of Flanagan’s father, a Japanese prisoner of war who survived his time on what became known as the “Death Railway,” but sadly, died at the age of 98 on the very day his son finished work on the book.

(According to the BBC, “The railway between Bangkok in Thailand and Rangoon in Burma was built by Japan in 1943 to support its forces, using forced labor. More than 100,000 people died during its construction.”)

“He trusted me, he never asked me what the story was. But I did talk to him often about very small things.

“What the mud was like, what the smell of a rotting tropical ulcer that had eaten through to the shin bone exactly was. What a tiny ball of sour rice would taste like when you’re starving, what starvation felt like in your belly and your brain.

“It was those things I talked to him about because I think truth exists in those small but very real physical details.”

Grayling told the Guardian that the process of judging the shortlist, which entailed reading and then re-reading twice, revealed “the genuine quality in a book.”

“The best and worst of judging books is when you come across one that kicks you so hard you can’t pick up the next one on the pile for a couple of days, it delays you but you know you’ve met something extraordinary. That’s what happened in the case of this book.”

He added that while the book is set during the second world war, given current events, it has a strong contemporary resonance.

“With cinema and reporting we are all the more aware of the kind of trauma that people experience when they have been engaged as soldiers or bystanders in these situations. This depiction is timeless, it is not just about the second world, it is about any war and it is about the effect on a human being.”

As for Flanagan himself, with British odds makers favoring any of the three British authors to win, he was somewhat surprised to find himself accepting the award from the Duchess of Cornwall. “In Australia the Man Booker is sometimes seen as something of a chicken raffle,” Flanagan said. “I just didn’t expect to end up the chicken.