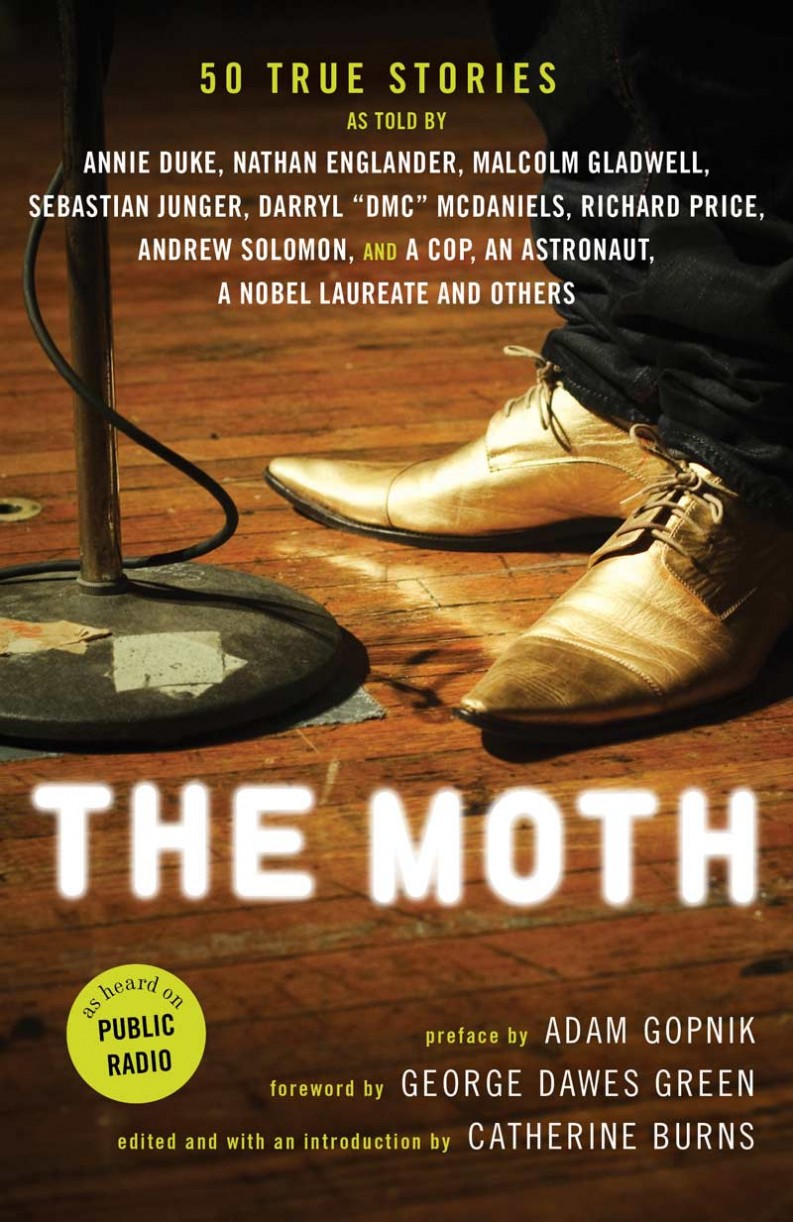 Curators of oral storytelling series in the UK discuss how the form is a reaction to our increasingly digital world — and how it intersects with publishing.

While it is hard to dissociate the words of storytellers from the images accompanying a children’s nursery rhyme or even Tolkien, from New York to London there appears to be a renaissance in oral personal storytelling going on that offers an experience so profound that couples often meet at their open mic nights.

“The great yarn is the oldest art form in the world. It comes from the cave right up to today,” says Sarah Bennetto, professional storyteller, comedian and founder of the Storytellers’ Club, where such comedians as Russell Howard and Sarah Milligan go to tell stories in venues as far apart as the Edinburgh Fringe and Melbourne.

Over the last few years Bennetto’s Storytellers’ Club has grown from “a 50-seater theatre, to 120 and now a 300-seater,” and she sees that as evidence of the oral storytelling renaissance – although similar claims have been made over the last 20–30 years.

“We never tire of hearing a good story down the pub and now it’s having a renaissance because it is a new way of connecting with people.”

Chip Colquhoun, artistic director of Snail Tales and company secretary of the UK-based Society for Storytelling, agrees that there has been “an upsurge of storytelling,” as it is considered important by a wide range of organizations such as schools, video game designers and advertising agencies.

Storytelling for Colquhoun is basically the “oral transmission of a story. However, he believes that it can be divided between traditional storytelling, which is often about something that happens to someone else which we take and pass on, and the storytelling that takes place in clubs like Bennetto’s, where individuals are often sharing their own experiences crafted into a story.

He assures me that both types of storytellers get on.

For Bennetto, the rising popularity of storytelling is fairly easy to explain: it “feels like something special happens when you are at the Storytellers’ Club, almost conspiratorially between you and the performer,’ she says, “as if you are about to hear something that you shouldn’t.”

This is a reaction, she believes, to the “mediated world’ that is present now even in many live performances. “Go and see a comic at the 02 Arena in London and you can’t really see him as he is so far away so you end up watching him on the television screens at the side anyway.”

Stand-up, Bennetto says, is “all about laughs per minute.” By contrast, “Storytelling is more of a journey, more sincere, more intimate. You don’t need to be funny. It’s something we can all do.”

Sarah Austin Jenness, producing director of The Moth, agrees with Bennetto that there is “great interest” in personal storytelling as a movement right now.” The Moth is a not-for-profit storytelling organization based in New York and now also running nights in Ireland, the UK and even Kenya for professional and amateur storytellers, each of whom works with directors before they get to tell their story. Nail Gaiman and Salman Rushdie are among the professionals who have told their stories there.

So rather than a plot the narrative arch is who are you at the start and who are you at the end,” says Jenness. “Out there on the stage while you are naked in front of strangers, you are a high-wire act; it is not stand-up or therapy. You need to have distance from true life.”

You can’t tell personal stories, she adds, if it’s an “open wound.”

Personal storytelling is, she believes, also about the anti-hero, as by sharing these stories we are in effect “telling on ourselves’ since so often they are “stories of failure, of being vulnerable, not how great you are.”

Like Bennetto, Jenness believes that this type of storytelling really connects with the audience because “it feels real,’ in marked contrast with a “life spent in front of the screen.” Although of course The Moth also uses the same technology as “tools” to spread its own message through podcasts, its website and radio. This sense of “community building” is so intense, she admits that it has resulted in a good number of “Moth babies.” Capturing “stories that were born live” in a printed book was a challenge. “We picked 50 stories out of 300 to become highly edited transcripts” and worked  closely with the original storyteller, who keep ownership of their story. She believes “you can really hear the storyteller’s voice” coming through.

Michael Bhaskar, digital marketing director at Profile Books, is more hesitant to call this a renaissance. Profile owns Serpent’s Tail, which publishes The Moth in book form in the UK.

“It’s a recent resurgence, which is still only in an early stage, and has to be connected to the quest for real and direct experience that is becoming a feature of our lives.”

It’s the same reason he believes that music festivals, adventure holidays and the theatre have flourished in the digital age – “people want pure and unmediated experiences in an age of saturation. We want something real, whatever that means, not something fake or contained by a screen.

“Perhaps on top of that there is also a sense, spurred on perhaps by the democratizing of publishing on the Web, that storytelling is something for everyone. It’s not just an elite art for novelists with English degrees – it’s something everyone has a stake in,” and everyone can do.

While Bhaskar admits that “there is a real grain of truth in the criticism that publishers have been looking mainly towards digital’ he believes that oral storytelling and its digital form are “absolutely compatible.”

“As the value of content is driven down in digital environments, so the value of live events increases. But events don’t work in a vacuum, they need a supporting array of content to add depth, weight, build interest both before and after.”

For Hannah Westland, publisher at Serpent’s Tail, there was a real similarity between oral storytelling and publishing in that both need “curation and editing.”

“What could be simpler than people telling true stories about their lives? However, it’s important to underline that as with most things that seem magnificently simple what actually makes these stories so powerful is that a great deal of careful rehearsal and direction goes into their live performance, and an equivalent amount of careful curation and editing goes into the way they are published in print.”

In fact, Westland feels that the success of The Moth shows that there is “a growing interest in books that offer a similar unmediated experience.”

Apart from The Moth this year, for example, Serpent’s Tail is also publishing two books next year that are largely comprised of interviews. One is a book about work, All Day Long, by a young writer called Joanna Biggs, who travelled all over Britain interviewing people from all walks of life about their jobs, creating a portrait of who we are through what we do. The other is The Sexual Fantasies of English Women, for which author Wendy Jones interviewed 25 diverse women about their sexual lives and desires.

However, Chip Colquhoun warns that if the personal nature of the storytelling that takes place at clubs like The Moth and now in its printed form interferes with the ability of a storyteller to “take and share a story” then it can “no longer be considered storytelling.”

In the end Jenness feels that “there is a real hunger for [storytelling], and the possibilities are endless.” The Moth is committed to the US and Britain, and Jenness has only recently come back from Kenya, where she was running classes on how to tell your own story.

This sense of growth has left Sarah Bennetto asking whether there are no limits to the commercialization of oral storytelling. “Could it work at the 02?”