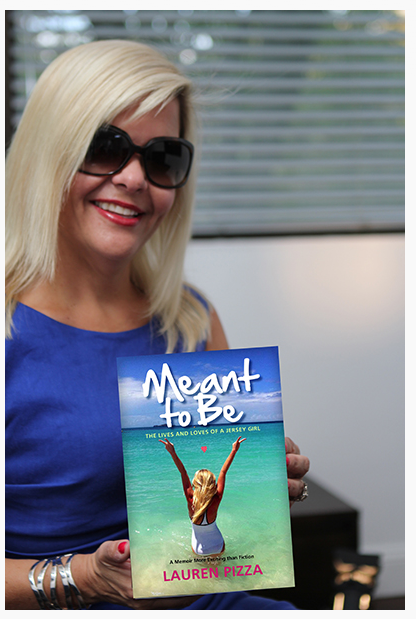 Lauren Pizza, the “quintessential Jersey Girl,” turned around a memoir in four months, with boundless energy, the help of SkyHorse Publishing and a few psychics. Lauren Pizza runs her own production company, is the mother of two, had a near-death experience, is a local fundraiser in New Jersey, hosts a show entitled “So Tell Me,” sold clean-air-systems in NYC, is a public speaker at Green Festivals, a graduate of the Yale Publishing Course, has even paid “a visit or two to a psychic” (which helped kickstart her 2nd or 3rd career), and is the almost-accidental author of a debut-memoir Meant To Be: The Lives and Loves of A Jersey Girl (Skyhorse, 2014) — a soon-to-be Broadway show.

Kenneth Clarke, in his Civilisation, spoke admiringly of the “professional-amateur” — of those who had just enough money to do more than merely dabble in what interested them. However, “amateur” implies that one did not particularly succeed. Lauren Pizza (yes, that is her real last name), while admittedly a complete neophyte to publishing, has learned quickly that branding oneself is part (a big part) of succeeding as an author.

But she never saw herself as an author: “The last thing I ever thought I’d do is write a book — let alone get it published.”

Pizza, who splits her time between Jersey and Florida, has taken it all in stride: “I really didn’t even know how to get a book published. I didn’t know you needed an agent.” In fact, New York’s SkyHorse Publishing signed the book without representation.

Pizza, a Jersey-girl through-and-through, flies in the face of Jersey Shore and all the other Sopranos, Boardwalk Empire, Real Housewives of New Jersey stereotypes. “I just wrote this little book and whatever the hell happened, happened.”

But then something funny happened (and the book itself is by turns hilarious and elegiac): “The book touched people: some people were inspired by the love story; some identified with my work-ethic; others came from big-families and liked that part of the book.” But some readers “also have had near-death experiences, and believe in the power of, if not prayer, then in spirituality.”

“And a lot of Meant To Be is about getting back to basics in relationships: being with someone who makes you laugh, someone who – even when times are rough—has a positive outlook on life; and that we want to build each other up and share the same goals,” says Pizza.

One goal — fully realized — are her homes: beautiful estates in Palm Beach, Florida, and Franklin Lakes, New Jersey. But this is a second take: In Chapter 32 of Meant To Be we learn that, “Jerry the Pshycic Plumber was right when he said I wouldn’t have to worry about money…but [when we moved into our dream-house in Ridgewood, NJ] only to find out the place was haunted.” Worse, the psychic added, “Your son is afraid to be there”.

The book went from manuscript to hard-cover in just four months.

I don’t believe in house hauntings — and neither does Lauren’s husband, Joe — but it turns out that in the 1800s, there were six sisters who were spinsters and one of them hanged themselves in the aforementioned house. Pizza laconically adds, “Some people buy a house and find out there’s mold in the basement. I buy a house and find out I have an angry ghost.”

Not that the book is all preternatural happenings and predictions of wealth-and-health: there’s real wisdom in it too, lines like “In New York City you are anonymous. It’s not like being in a small town, where everyone knows your business. You can escape and reinvent yourself. On the other hand, you can escape everything but yourself.” If you’ve lived in the City for any appreciable amount of time — especially the Gray ’90s — you can probably identify with that statement.

Another amazing thing about the book — and as an editor I find this almost astounding — is that it went from manuscript to hard-cover in just four months (the book is also available in audio, with Lauren herself reading it, as well as electronically). Part of this quick-turnaround is due to the Production Team at SkyHorse, and another large part is due to the indefatigable publicity and marketing energy that Pizza herself exudes with such confidence that she puts those around her both at ease, and eager to be part of this crazy experiment called Meant To Be.

But it’s more than just a book about a plucky young woman “making it” in the City despite the usual obstacles: parents who disapproved of her long-haired, rock-musician husband, the glass ceiling of corporate America, and 9/11. At its most heartfelt, “It’s about our families, our children—cherishing them and truly realizing that they are a gift.”

At this point, as if on cue, Lauren’s husband walked in with a newly mounted photograph of their son. The photograph, however, was on glass—in-glass and seemed almost holographic. “This was taken at Montauk,” Joe said. And both parents looked at it with eyes that only parents can produce: a light within the light.

Due to her near-death experience, Pizza considers herself blessed: “I came back with a gift — I’m not afraid to talk about death, but I have a greater appreciation for life. It’s weird: we’re all going to die, but it’s taboo to talk about death.”

“A near-death experience is a blessing: it gives you a vision that there IS something beyond this earth, and at the same time it helps you re-appreciate your time here on earth,” Pizza says.

Still, for all this death-and-after-life talk, the book can be downright hilarious, and in this regard Pizza’s book isn’t far-off from Woody Allen’s Without Feathers (without the neurosis), or David Sederis’s Me Talk Pretty One Day (without the house in the South of France), but is closer perhaps to Nora Ephron — “Though I’m a big Danielle Steele fan, too”, Pizza adds without guile.

Originally entitled WTF (no, not “What the F8#k” but “Wasn’t That Funny?”), Meant To Be is comprised of forty-six short chapters, that can be gobbled up quickly and almost always able to produce a smile, if not an out-loud laugh.

When asked to describe Meant to Be “in one word or more,” Pizza said. “Humor.” Then added, “Spirituality.” And finally, “And a love-story…in New Jersey.”

Never one to stand (let alone sit) still, Pizza is already at work on a second volume, “Mainly about how the first book came to be, but also because I had to cut 25,000 words from the first book!”

I myself married a Jersey girl over a dozen years ago, who, like Pizza was born in the urban-quagmire that is Paterson. She read Meant To Be and gave it the ultimate imprimatur: “It’s funny because that’s how life is.”