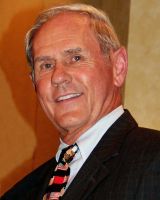 Randall White, CEO of the Educational Development Corp, an Oklahoma-based book distributor, explains how he survived pulling all his company’s titles from Amazon.com. When asked why he decided to do this, he told Business Insider’s Aaron Gell, “Remember ‘Butch Cassidy and the Sundance Kid,’ when they’re on the cliff and getting ready to jump and one guy says, ‘I can’t swim?’ And the other guy says, ‘What are you worried about? The fall’s going to kill you.”

With revenues “steadily eaten away by competition from the world’s most successful, and most aggressive online retailer,” it was a choice he felt he had to make. “We were selling more to Amazon but our business kept declining,” noting a dip of 40% in one division alone. “I’m thinking, ‘What can I do here? This is crazy.’ You had to fix it, or you’re going to die anyway.”

He cut the cord to Amazon in 2012. Not only that, but, “distributors who resell books to Amazon, including Ingram and Baker & Taylor, also soon found their supplies of books like The Gas We Pas and Sticker Dolly Dressing Dream Jobs cut off. In addition, EDC also broke from other “big-box” discount stores such as Sam’s Club, Costco, and Target.

And how did it all turn out? It seems that EDC not only survived the “leap into the unknown” but thrived, having had its best year in net revenues ever. Its sales in July were up 28% compared to July 2013, and revenues for the first quarter were 20% higher than last year. Peter Usborne, the founder and CEO of the U.K. based children’s publisher Usborne Books, (for which EDC has been a long-time holder of U.S. distribution rights) admitted to Business Insider that, at least initially, he was concerned with the plan. “We weren’t involved in the decision,” he said in an interview. “Randall just told me he’d done it. He quite likes a fight, and I think he was looking down the wrong end of a shotgun. It looked pretty grim for awhile, but now it seems he’s the wind in his sails.”

How did he do it? According to Gell, EDC had several advantages:

“For one, the company does not acquire titles or deal with writers, except indirectly through Kane Miller, the publisher it acquired in 2008. As a result, it does not have to fear a wholesale defection of worried authors to rival publishers the way Hachette does.

Perhaps most important, EDC has Nancy Ann Wartman, a mother of five living in Taylor Mill, Kentucky. Wartman is a stalwart of the distributor’s home-business division, known as Usborne Books & More (UBM), an army of some 7,000 sales ‘consultants’ who sell Usborne and Kane Miller books directly to their friends and neighbors, mostly through book fairs and Tupperware-style home parties (a root beer float night is one surefire winner).”

Even with all that, it wasn’t an easy decision for White – Amazon counted for $2 million in annual sales. “That caused a little pucker in my drawstring, so to speak,” he allowed. “It was a gut-wrenching decision. Most people thought I was crazy.”