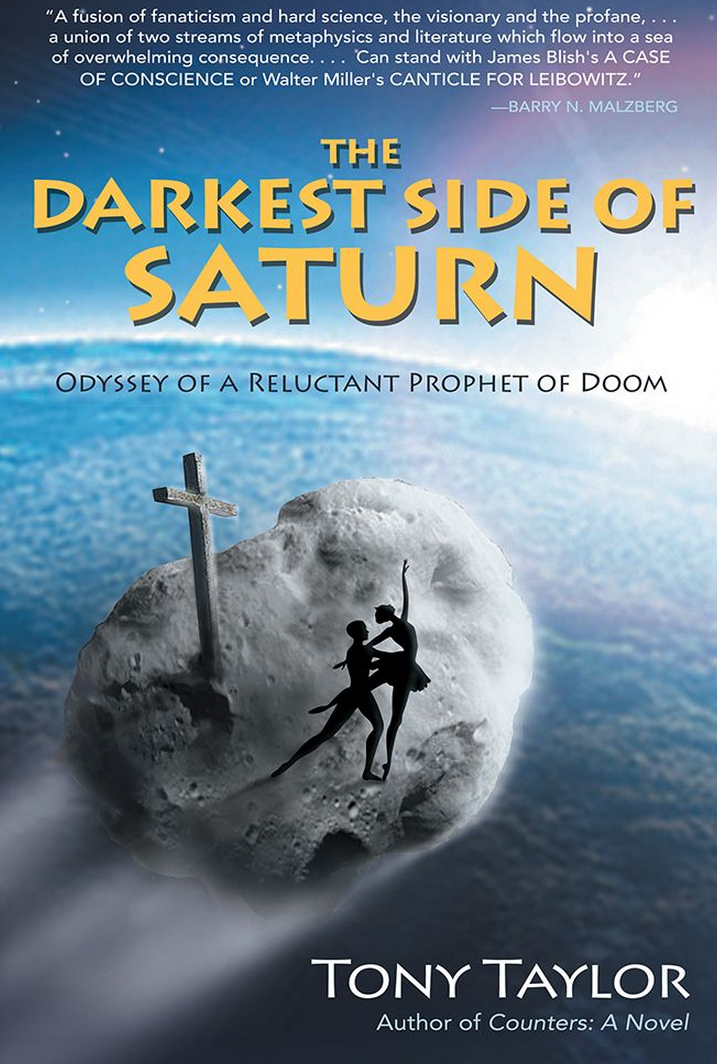 The Darkest Side of Saturn, by Tony Taylor: This extraordinarily well-crafted, thought-provoking novel revolves around engineer Harris Mitchel and his coworker Diana Muse-Jones. When Mitchel detects a massive asteroid that he calculates could collide with Earth in 16 years, he goes public in an attempt to avert the disaster, only to be met with contempt and disbelief by a dangerously fanatical preacher, a loudmouth radio personality and the president of the United States himself. The result is an apocalyptic thriller, a powerful romance, a cautionary tale about religious fanaticism and, above all else, an insightful self-examination of humankind and our apparent decline into a society powered by apathy, ignorance and intolerance. Read review.

Conquering Concussion: Healing TBI Symptoms With Neurofeedback and Without Drugs, by Lee Esty, Ph.D. and C.M. Shifflett:  As a health psychologist and licensed clinical social worker, Esty has worked extensively with patients with brain issues. Here, she advocates treatment of traumatic brain injury through biofeedback therapy with a thorough yet highly readable text rich with explanatory and well-documented details and a wealth of powerful case histories.  Read review.

Official State Flowers And Trees: Their Unique Stories, by Glynda Joy Nord: This botanical anthology offers an insightful, entertaining excursion into the history of how the 50 states selected the flowers and trees they display on their emblems. Nord recounts entertaining anecdotes of how politicians, school children and private interests played a role in selecting their state’s botanical representations, detailing everything from President Reagan’s proclamation certifying the rose as the national flower, to Hawaii’s symbol of royalty, the hibiscus. Read review.

Walking Into the Wind: Being Healthy with a Chronic Disease, by Barbra Goodyear Minar: In journal entries written over 13 years, Minar shares the challenges and triumphs of her struggle with the autoimmune disease lupus. Although Minar is Christian, her insights are never preachy, but thought-provoking and comforting. She adeptly expresses her feelings of sadness and loss but also gratitude and joy, delivering a book full of prayer, humor and emotional depth. Read review.

Climbing the Coliseum, by Bill Percy: In this engaging novel, psychologist Ed Northrup struggles to cope with depression, his so-called “black dog.” But when his ex-wife abandons her surly 14-year-old daughter from another marriage into his care and Ed turns for help to the new deputy sheriff, Andi Pelton, he finds these two relationships growing and his depression finally tamed. Percy’s story  offers spot-on dialogue, interesting and amusing characters and a wonderful depiction of life in a small town. Read review.

Death Song, by Jeff W. Manship: Set in the rugged West of the late 19th century, this compelling historical novel tells the story of a Mormon man driven west by the hostility of nonbelievers and an Indian orphan adopted by Apaches who is awaiting execution for the murder of a white family and abduction of the Mormon’s daughter and two nephews. As their paths converge, the novel illustrates how two people driven into conflict can be struggling against similar demons. The result is a story of depth and scope that presents a riveting portrait of a stressful time in the settlement of the American West. Read review.

The Adventures of Deacon Coombs: The Case of the Vanishing Vespers,  by Ambit Welder: Audaciously fusing science fiction and mystery a la classics such as Isaac Asimov’s The Caves of Steel and Alfred Bester’s The Demolished Man, this novel is set in the year 3533 when Earth has recently joined a coalition of the four star systems. As two members of this alliance’s High Council meet suspicious deaths, human detective Deacon Coombs is called into action. What he ultimately finds is a conspiracy so grand and an entity so evil that even the legendary Coombs may not be able to defeat it. With strong science fiction elements and a sleuth-powered storyline, this novel is sure to appeal to fans of both genres. Read review.

Jasper is a Hero, by Lily; illustrations by Joel Ray Pellerin:  Introduced in the author’s previous book Jasper Saves the Day, Jasper is a young duck who lost a foot but has valiantly overcome his disability. In this sequel, Jasper is asked to teach ducks from other flocks how to spot hunters. As Jasper grows older, though, he forgets to follow his instincts and is ultimately shot by a hunter. This is a brave, notable book for the way it provides an air of scope and purpose to Jasper’s life. Though Jasper’s death might be upsetting to very young readers, most elementary school children will appreciate the book’s honesty and depth. Read review.

Warfare: The Things They Never Tell You About, Part 1, by Maria M. Bowe: When Bowe encountered birdlike manifestations of evil spirits and then suffered chronic illnesses that baffled doctors, she found herself in a spiritual battle for her life and became aware of the need to move from being a “religious” person to having a truer relationship with God. She addresses that concept here, explaining how readers can receive deliverance from spiritual attacks by repenting of sin, being obedient and seeking God through prayer and His word. Well-organized and content rich, the book offers an effective blend of Bowe’s story, scriptural teaching and personal application. Read review.