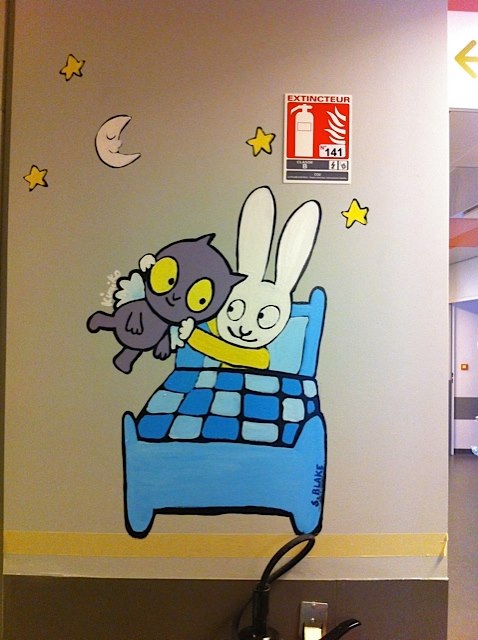 An illustration from the walls of Paris’ Hôpital Necker.

An innovative collaboration between a French children’s publisher l’école des loisirs and a children’s hospital results in something extraordinary.

Artists have been painting on hospital walls since time immemorial, from 15th-century frescoes in Italian hospices and murals portraying Crusader knights in a Jerusalem hospital to illustrations by early 20th-century children’s book author Pixie O’Harris, who decorated over 50 hospitals in Australia. More recently British children’s book illustrator Quentin Blake began decorating clinics and hospitals in the UK and France in 2006.

Now one ward in the world’s first pediatric hospital, Paris’ Hôpital Necker, has benefitted from a unique and entirely pro bono collaboration with the independent children’s publisher, l’école des loisirs.

A dozen illustrators and authors, all of whom are part of the publisher’s loyal in-house stable, are finishing up an ambitious project that will hopefully inspire other children’s publishers to follow suit.

Martin Chalumeau, a doctor in the general pediatrics division at Necker hospital wrote to the école des loisirs in December 2013 saying he was hoping to make the hospital corridors more cheerful. Nathalie Brisac, l’école des loisirs’ head of communications took the affair in hand and sent a general email to the company’s illustrators.

“The response was immediate and very positive,” she said.

Brisac and a group of illustrators visited the hospital in early 2014 “which was very impressive and made us quite worried,” said Brisac. “It was like a labyrinth, and we thought, if we are feeling lost, how must children who are ill feel?”

All agreed that the hallways of the newly renovated hospital were so imposing and maze-like that it was important that there be landmarks, so that patients and their parents could orient themselves.

At first each illustrator claimed a wall, but Brisac decided that the illustrations needed to be a collaborative effort in order to ensure a continuity and coherence within the space. “I asked each of the illustrators to send me drawings of characters that we would then mix together, which was a lot to ask of them because they usually work alone.”

The educator in charge of the hospital’s school recommended that most of the illustrations be characters from the authors’ books so that the children could recognize them or later read the books. As Brisac received the illustrations, she sent them on to an interior decorator, also working as a volunteer, who designed the layout of the hallways. Objects on the walls, cupboards, or fire extinguishers were integrated into the illustrations, which were all literally linked by a thread — a thick blue stripe that alternately looks like a ribbon or a wave, joining together the drawings throughout a portion of the 3rd-floor ward. Care was taken so that any images that could be frightening were excluded. Alternately it was important that the drawings also be appealing to adolescent patients. The hospital staff approved numerous details; the material was ordered — paint for paper not being the same as wall paint for example — and Dr. Chalumeau himself bought the supplies.

Once the layout was finished it was sent back to the illustrators, and they set to work last spring.

“They tended to go together in groups, to provide support for each other,” remarked Brisac.

“These were quite unusual circumstances. The pots of paint were on hospital carts…some authors sent me emails saying they had dreamt about what they were going to paint the next day…”

Alan Mets, who lives in southern France, came up to Paris several times, working alone and with Pascale Bougeault. Mets’ characters are the most irreverent of the group, comic book-like and cheeky, appealing to an older crowd: his wolf dressed as superman, a superstar pig belting out a song with a microphone, or a cat and a dog sticking out their tongues. Mets said he tried to make himself invisible, “I wanted to be as discreet as possible, but the children came to see what I was doing. I think what the children liked, was that we were doing what they weren’t allowed to do. They would have liked to help out.”

Before becoming an illustrator Mets had initially studied medicine but changed fields because it was too rough emotionally. He said that the experience at Necker was also laden with emotions. “It’s very physical work, you have to keep everything clean because it’s a hospital. I felt enthusiastic but it was also very difficult to see children who were so ill.”

Other illustrators, such as Dorothée de Monfreid, echoed Mets’ experience and said that it was very moving to work at Necker. “I have children, and one of them was a patient there. The staff was so warm, it was gratifying, we felt useful, but it was tough when we heard children crying and saying ‘it hurts’. It was exhausting; besides the physical exertion there was a certain tension.”

Monfreid chose to use just three colors to paint her characters, making them very graphic, but her simple lines are enough to convey a sense of joy for example, in her giant rabbit on a windsurf heading towards the window riding on the blue ribbon, or a tiny dog pulling a dinosaur on a lead.

The illustrator Kimiko approached her work a little differently by arriving at the hospital with her images already on tracing paper, avoiding the sheer physicality of drawing large images on the wall from the smaller sketches. At home, she used a projector to cast her characters onto the wall and enlarge them; then transferred them onto tracing paper. Kimiko worked with Stephanie Blake; several of their characters are depicted together, encapsulating Brisac’s idea of a complete collaborative effort.

“When we had the first meeting we were welcomed by about 30 doctors who came to see us and asked us if we would come to their wards. The nurses all thanked us and we were treated like stars…it was a very enriching experience,” said Kimiko. “I felt very small, when I was working and saw what the doctors and nurses were doing. It was difficult psychologically to see the children and their parents in the corridors. It was gratifying to think that we were doing something for the children, for the families, the doctors and the staff, at the same time it seemed like so little.” Jocelyne Matichard, a children’s educator who works on the ward said that because all the floors in the hospital are identical, the école des loisirs’s drawings have made it possible for children and parents to orient themselves. “It has also put life on the walls which were so sad before. When I take children to their rooms I show them the images so that they can find their way. Some children recognize the characters from books they have read.”

The variety of styles works well for children of all ages, said Matichard, who added that even older children when they are ill tend to “regress a little and are happy to see all of the characters.”

While the sheer size of the hospital is daunting, some illustrators such as Kimiko have volunteered to return for a few days each year.

With just two authors yet to work on the walls, the école des loisirs project will be finished in time for a Christmas inauguration.