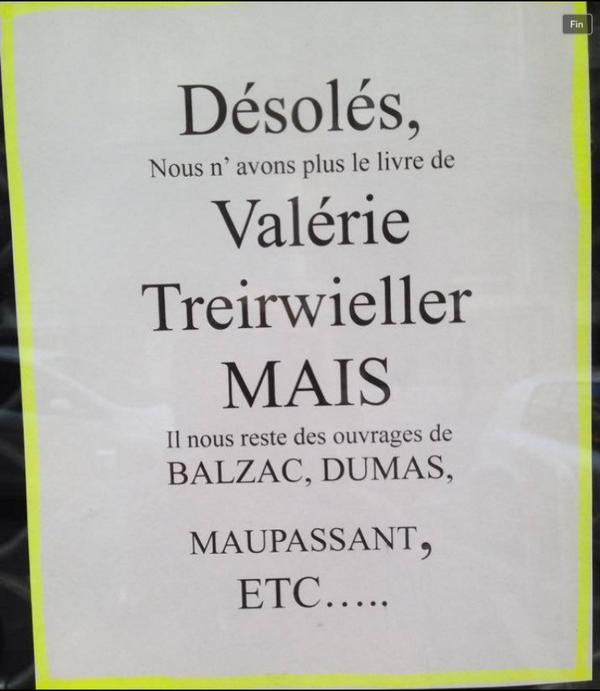 French booksellers have found an amusing way to apologize to their customers for not stocking Valerie Treirweiller’s bestselling tell-all, political revenge memoir.

France’s fall literary rentrée, when 600 or so books are released during a three-month period is upon us. Joining the crowd is the tell-all Merci pour ce moment (Thank you for this moment), by president François Hollande’s former partner, journalist Valérie Trierweiler. Launched last week by the relatively young publishing company, Les Arènes, the book traces Trierweiler’s relationship with Hollande and their highly mediatized break-up last spring following revelations that Hollande was having an affair with actress Julie Gayet. With an initial print-run of 200,000 copies, 48 hours after the launch Merci pour ce moment was sold out in most bookshops—FNAC, France’s largest book chain sold 27,000 copies in a few days—and Les Arènes announced it would reprint. In all, 145 000 copies were sold in 4 days of which 14 000 e-books and 131 000 paper copies. Les Arènes, is reprinting bringing the book to a total of 510,000 copies in print.

A few booksellers, taken by surprise by the book’s astonishing success, and unable to provide their customers with more copies until a new print run, have taken to putting up signs in their bookshops such as:

“Sorry we are out of Valerie Trierweiler’s book but we do have books by Balzac, Dumas, Maupassant etc…” “We are booksellers. We have 11,000 books available. We have no intention of becoming Trierweiler and Hollande’s rubbish bin. Thank you for this ‘moment’ of understanding.” Or, perhaps this one, which is about as honest as you can be: We are booksellers and we did not order enough copies of Trierweiler’s book (because we didn’t really pay attention to our orders when we were on holiday) and now we have stupidly missed hundreds of sales that we would have liked to make during this book market crisis.

Instead of coming off like nitwits who missed this publishing ‘coup’, let’s just say that if we don’t have the book, it’s because we are booksellers who are smarter than most and that we never lower our standards to selling rotten best-sellers and that we only have on offer books of a high standard.

Readers who don’t read the same books as us are idiots.

Thank you for this moment of understanding”

A comment by a reader following an article published on the subject in the magazine Les Inrocks reads: “…745 trees were felled for Valoche! (a pejorative nickname for Valérie) A small forest! We know that 3.2 trees are felled each second in the world in order to make toilet paper. But at least it’s useful.”