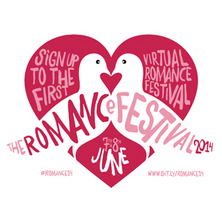 It was a risk as to how the virtual festival book would be perceived by fans, authors and publishers,’ admits Sam Missingham, the new head of events at HarperCollins Publishing and the driving force behind the first-ever virtual Romance Festival, a two-day event that was held in cyberspace this past June.

“But my remit was to develop ideas to engage readers with authors and if you are genuinely going to be fan-facing then it has to be like this. So I met with different departments and it was clear that genres like romance, teens, and crime were the keenest as they had the most digitally engaged readers.”

Out of these three, the romance genre seemed ideal, as “it was one of the earliest genres to adopt e-books”; six out of ten books in that genre are now read in that format. “The authors are very connected on social media with their audience.” What’s more, “the real festivals in these genres were tired and expensive, and not fan-focused.” While most book festivals have an online presence, a virtual festival takes this a couple of steps further to the point where all talks, Q&As and chats between authors and readers take place online, via social media including Facebook, Twitter, and Pinterest, as well group video chats on Google Hangouts and Goodreads’ Ask the Author platform.

Key to the success of the Romance Festival was, Missingham believes, that it embraced the spirit of the Internet by being ‘publisher agnostic’ – that is, open to all publishers. This was a hard sell to her bosses but made sense to fans, as “few fans have any idea as to who publishes their favorite author.” It was also egalitarian, with 120 “huge, small and unknown’ authors all together in one event. Indie authors were embraced in ‘a way that was genuinely fair and respectful.”

It was a global event too, says Missingham, as a third of the authors were not from the UK and, often, were physically on the other side of the world. Yet, because of the online nature of the festival, they could still take part — even if it meant staying up into the early hours of the morning in some cases. One author even took part in a Google Hangout from a writer’s retreat in New York.

The challenge was to select the right platform for each event. “Facebook as a platform worked much better than Twitter for author Q&A because you could scroll down and see the conversation. Some author stuff worked better on Twitter, such as Script Doctor,” says Missingham.

Despite its virtual nature, she admits that it did become a ‘huge resource drain,’ involving all personnel in the marketing department as well as graduate trainees. Some of the platforms, such as WordPress, proved limited in terms of interactivity.

By the end of the festival, the organizers had a set of vital statistics that include the 120 participating authors’ potential global reach, some 17.9 million timelines on Twitter and 75,000 people on Facebook. Eighty-five percent of those readers who replied to a questionnaire said they found out about new authors and new books as a result of the festival. Missingham is already planning festivals in new genres for next year. With such rich coming out of the event, it is not surprising that interest in virtual festivals is growing. Tomorrow, August 13th, the Gollancz Festival — a partnership between sci-fi genre publishers Gollancz and the Waterstones flagship store in Piccadilly, London — will take place, both as a digital festival during the day and in the evening, a festival “in real life.”

Sophie Calder, Jen McMenemy and Marissa Hussey are Gollancz part of the team behind the Gollancz Festival. Hussey, Digital Marketing Manager at Orion, sees the advantage of the virtual festival is that “as our readers and authors are from around the world we can bring everyone in who doesn’t actually have physical access to it.”

Similar to the romance community, the sci-fi community is particularly strong online, says Jen McMenemy, Senior Marketing  Executive at Gollancz and Indigo. “They are very active communities who are used to getting lots of news via social media. They are also more likely to follow authors and visit authors’ websites so they can have a more direct relationship with authors.”

However, unlike the Romance Festival, the job of the Gollancz Festival, says Sophie Calder, Publicity Manager for Gollancz, is “to sell physical books, as sci-fi fans still buy a lot of books and Waterstones is a key partner. So we need to do something that supports bookshops and booksellers rather than takes them away.”

The “inclusive” nature of the online world is also being carried over into the physical world with the “affordable” £6 ticket and a goodie bag.

Technically, the first question, says Hussey, “was, does this work on Twitter or Facebook?” They decided the panel would be on Facebook. They are also trying to “stay true to life,” so on Pinterest “you can take pictures of your conference breakfast and post them up.”

Ultimately, says Calder, what they have tried to do is to select the platform “which the author likes the most, where perhaps they have the biggest number of followers and they can play to their strengths.”

The Gollancz Festival has also been “working with Goodreads on doing Q&A with authors with their new Ask the Author platform, which is more interactive and will generate the most interesting dialogue.”

“Asking authors questions has long been a tradition at bookstores, literary festivals, and online, and we had really seen this take off in groups on Goodreads, as well,” says Patrick Brown, director of author marketing for Goodreads. “However, there was lots of room for improvement.”

The key issue – and this still exists for Q&As on other social media – is that once the event is over, the answers tend to get lost as they get buried under all the other new information coming through. So Ask the Author, launched in May on Goodreads, “brings that Q&A experience front and center on the author’s page so that it’s easy to discover and share with your Goodreads friends.

“In July alone, we had nearly 12,000 authors use Ask the Author on Goodreads to answer 27,000 questions,” says Brown. “We’re also seeing authors start to use Goodreads’ Ask the Author as part of online festivals – it’s super-simple to use for specific events and the answers are also there for readers and fans in the future.’

According to a spokesperson for Waterstones, UK’s largest bookshop chain and key partner of the Gollancz Festival, virtual festivals are no threat to their stores as “any opportunity to talk about books, be it online or face to face, is a good thing. We at Waterstones love to invite readers into our shops to meet authors but we also stream events online, Skype and host twinterviews, to help authors engage with their fans and reach more people than before.

“From our experience these formats work especially well for sci-fi/fantasy authors, a genre that is very important to us and one that we often hold very successful events with, both virtually and traditionally.”

For the teams behind both festivals there is a real sense that they will grow and grow. Sam Missingham is hoping to do crime and teen virtual festivals in the future as they are both buoyant and digitally engaged markets, but they will be tougher to crack, she believes, as “the real events in crime are excellent.”

The Gollancz team are already on the lookout for the “amazing new platforms that will emerge between now and next year,” says McMenemy. In future it is hoped that the physical festival will actually move round Britain.

Ultimately, says Missingham, these festivals are about the “commercial imperative” of “putting more books in the hands of more people.”