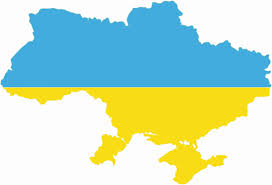 Sales of Russian books in the Ukraine have plummeted in 2014 and the Ukrainian government is looking at passing legislation to curtail imports further. A map of the Ukraine which does not depict the annexation of the Crimea by Russia.

It should come as no surprise that the sales of Russian books in the Ukraine have declined sharply since the beginning of the year. Dmitry Ivanov, CEO of Olmamediagrupp, one of Russia’s largest publishing houses, says the company’s book sales in Ukraine for the first six months of the current year have declined from 15 million to 5 million rubles, compared with the previous year. However, he says, this fall in orders has already been offset somewhat by an increase in demand for its books in the Crimea.

Azbuka-Atticus, another Russian leading publisher, notes the share of Ukrainian sales for his company declined from 11% in 2012/2013 to 6% during the first half of the current year.

Now, the Ukrainian government is looking to make the situation even more challenging by imposing specific sanctions against foreign books and publishers.

According to Alexander Sich, Ukraine’s Deputy Prime Minister, planned sanctions, which will be in the form of quotas and licenses, will primarily affect Russian books, which currently account for about 80% of the Ukrainian book market.

The need for quotas is acute, says Sich as the majority of Russian books in the Ukrainian market are of lower quality and mostly aimed at “destabilizing the situation in Ukraine and pose a threat to national security.”

This is not the first attempt to boost the share of domestically produced books in the Ukrainian market. For example, in March 2013 the Ukrainian State Committee for Television and Radio Broadcasting allocated 37.5 million hryvnia (USD$5 million) for 211 local publishers to increase the production of books.

In addition, in June 2014 a bill to exempt publishers and distributors of Ukrainian literature from income tax, was introduced to the Ukrainian Parliament (Verkhovnay Rada),

Despite these measures, Russian books continue to dominate the Ukrainian book market, accounting for some 75% of the titles available, according to estimates of the Association of Book Publishers and Distributors of Ukraine. At the same time the share from domestic publishers is about 20%, while the remaining 5% accounts for book imports from other countries.

According to data from the State Statistics Committee of Ukraine, book imports to Ukraine in 2013 amounted to USD$39.5 million in value, of which which $20 million was accounted for by Russian books. Some 75% of Russia’s publishing houses export titles to Ukraine.

According to Dmitry Yaronov, director of marketing department of Azbuka-Atticus, if the proposed sanctions are imposed, the Ukrainian book publishing industry is strong enough to be able to provide the country with literature, even should book imports from Russia cease altogether. However, he believes that without proper state support, the industry will struggle in the long term.