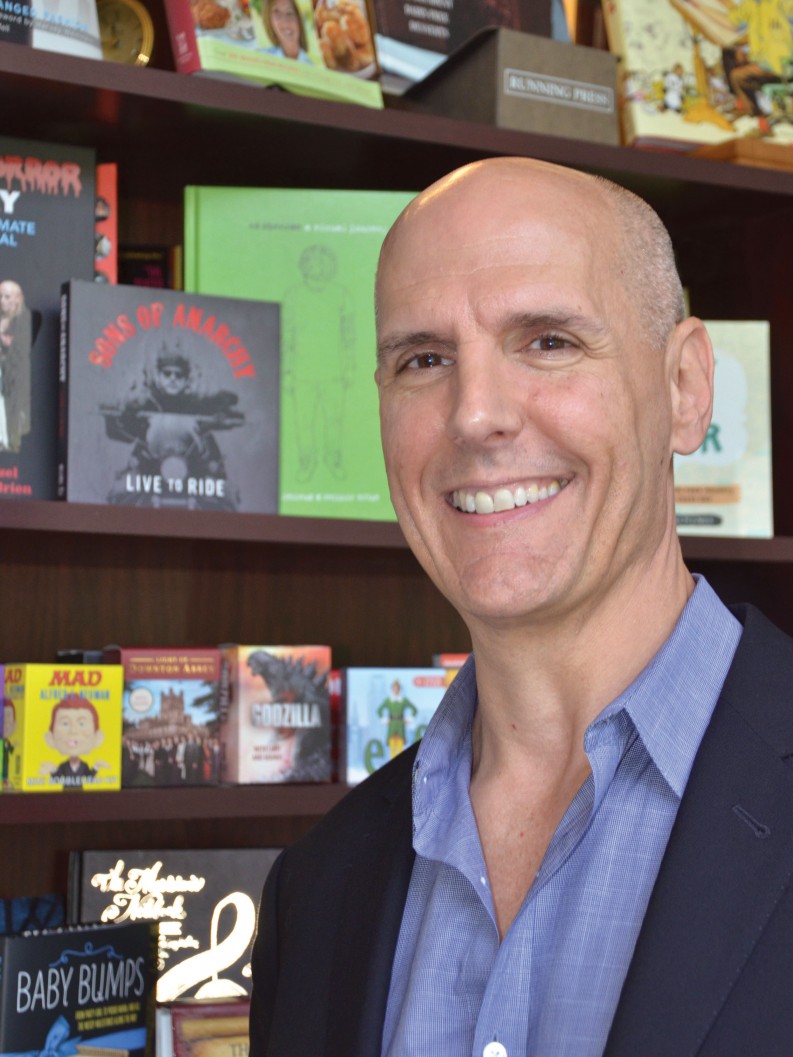 Christopher Navratil, v-p and Publisher of Running Press, explains how the publisher stays ahead of the entertainment trend curve and produces hits. Philadelphia’s Running Press was founded by brothers Larry and Buz Teacher above their father’s bookstore in the 1970s. That unique beginning presaged the singularity Running Press is known for to this very day.

Christopher Navratil, Vice-president and Publisher of Running Press, has been with the company for over half a decade and much of the company’s recent and curious success can be traced to his lucid and one-of-a-kind vision.

While it’s part of The Perseus Book Group (based in New York), Running Press (still in Philadelphia), gets to share all of Perseus’s back-office heft (like rights and permissions), but maintains its autonomy.

With about 25 employees, Running Press publishes “about 180 news titles a year—in three different divisions [Adult Trade, Kids, and ‘minis’]”, according to Navratil. “Eighty of those books are part of our Adult Trade, Pop Culture, Lifestyles, and licensed properties.” A big fan of Old Hollywood, Navratil showed me a massive book George Hurrell’s Hollywood (replete with stunning black-and-white photos of the era — the one of Bette Davis is almost Mona Lisa-esque), and another coffee-table book on Sharon Tate. But it’s the line of “mini-editions” — literally the exact opposite of the behemoths on Hollywood — that are so incredible in their own small way: an illustrated book on saints, which literally fits into the palm of your hand — is so well-produced as to remind one of a medieval Book of Hours. Which fits nicely into Navratil’s vision of this line of mini books and “kits.”

Which is no accident: “Our work here is very beautifully visual — we try to give each book its own voice.”

Navratil is attuned to current pop culture — everything from Downton Abbey to How I Met Your Mother to Olivia (that mischievous piglet) to Madeline (that beloved French school-girl) to Peanuts to Chelsea Handler has found a new home through Running Press’s aggressive (and successful) licensing program.

However, in addition to making mini-items (such as a hand-held model of Downton Abbey that plays the TV show’s theme song, as well as an Abbey Snow-globe), Navratil and his team (“we spend a lot of our time brainstorming, actually”) catch trends before they go completely viral, too. A good example of this is singer/songwriter Ed Sheeran (aged 23) who opened for Taylor Swift last year, and whose first book Ed Sheeran: A Visual Journey is coming out from Running Press (in a joint UK venture) this November. Norman Mailer was once criticized for defining new waves of consciousness just as they hit the mainstream, but never before that. One can’t make that criticism of Running Press. While Workman, for example, certainly do comparable books and “projects” (it’s hard to classify a singing Downton Abbey as a “book”) that are hip and trendy, they also seem to revel in being New York-centric at times. Running Press, on the other hand, seems to be very comfortable in the skin of a non-New York publisher that finds both items that are already popular, while growing new areas of discovery.

Perhaps part of that decidedly-non-New York scene comes from Navratil himself: after working as a book seller in Boston, he moved to Chronicle Books in San Francisco (“another city, like Philadelphia, that has only a handful of publishers”), then to Denver at AccordPublishing (owned by Andrews McMeel) where he had a New York Times and Publisher’s Weekly Best-seller in the children’s book Bee and Me.

The children’s list Navratil has since developed at Running Press is deep and varied: “We do YA, mid-grade, and picture-books as well as a very successful doodle series, too.” There is also Steampunk: Charles Dickens’ A Christmas Carol (seriously: if this didn’t exist, could you think it up?!). “All of our books, I like to think, are beautiful in their own way, and are created with a broad market reach in mind.” So in addition to pop-cult favorites (or icons, even) like The Rocky Horror Picture Show to Sons of Anarchy: Live to Ride and AMC’s finest moment, Breaking Bad: I AM The Danger, Running Press also does “brief-guides” on subjects ranging from The Hunger Games to Walt Disney to “Gangsters.”

“Eclectic” would be the easy — make that “over-simplified” — word to describe Running Press’s lists, but I prefer Navratil’s own words, “We do entertaining books – very often about entertaining and entertainment — that are fun, voice-driven, very visual, and decidedly trendy.”

Which makes the demographic for Running Press a bit on the young-side (excluding all the YA and kids’ books). One has to wonder about the psychographics of the Running Press audience: they must have a great sense of humor, too (is there a better title for a cocktail cookbook than Hickory Daiquiri Dock? Only if it’s Tequila Mockingbird—and Running Press has done both). And when you wonder if it’s all just about clever licensing and trend-watching, Running Press is able to step up and punch you in the face with You Are a Badass: How to Stop Doubting Your Greatness and Start Living an Awesome Life. Self-help for the wanna-be Alpha-male/female in your life. A best-seller, as well.

“We try to give our books the best production values with the right price — not over-pricing them — while trying to sell across a range of sales channels,” Navratil added. Running Press certainly does do a great-looking product. And to keep the prices in line they do most of their printing overseas.

As far as ebooks are concerned, “Running Press does ebooks suitable to each device, including enhanced books and books with multiple ISBNs.” If there is general shakiness or fretfulness in the publishing industry about ebooks and the many problems they bring (piracy, reflow, the trends in devices), Running Press seems unintimidated by the future. They exude optimism and confidence without being cocky.

Philadelphia, for its lack of a book-publishing scene, has two of the most original, creative and downright fun publishers in the industry: Running Press, and Quirk (who has more than a few former Running Press alumnae).  Still, not being in the same town as ICM, Janklow and Nesbit, WME, Wiley, and all the other New York agencies forces Running Press to stay in touch and “often reach out to those agencies and remind them — in a friendly way! — that ‘Hey, we are here too!’”

Nearly a half-century later, Running Press is very much here. And to stay.