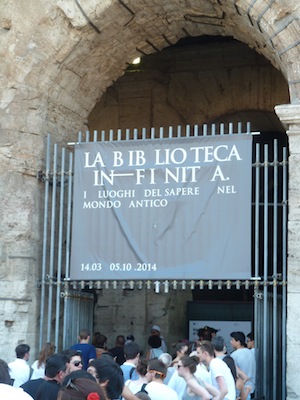 In the place where gladiators once fought, the city of Rome is hosting a summer exhibition of the public and private libraries of the Ancient World.

The ghost of the Argentine short-story writer, essayist and poet Jorge Luis Borges stalks the ambulatories – the arched walkways – of the Colosseum in Rome this summer. At a time when the future of libraries is uncertain for a variety of reasons – financial cutbacks (especially in the UK), the lack of a uniform policy on ebook lending among publishers, the growth of that free library everyone carries with them, the smartphone and tablet – an exhibition held in this most unusual of venues, and which takes its name from an idea in one of Borges’ short stories, looks at the distant and glorious past of these citadels of learning. ‘La Biblioteca Infinita’ – the Infinite Library – explores the public and private libraries of the Ancient World and reminds us just how advanced the Romans were, despite the barbaric nature of what took place just yards from the exhibition. “This conquering people,” say the organizers, “accustomed to bloodthirsty practices like gladiatorial shows, also invested massively in culture and the education of the ruling classes, spread literacy through all classes of society, culturally unified many of the empire’s territories and was the first to institute public education at state expense.”

The exhibition relates how it was Caesar who first wanted to give Rome a public library, a project that was only finished after his death. Such libraries were not stand alone structures, but belonged to multicultural complexes that often included temples and gardens and housed works of art from Roman conquests around the world. The creation of public book collections was part of the cultural policy of several emperors. They could see their worth for the benefit of the people. Pliny the Elder described the library as “an organized archive of the products of human intelligence.”

Yet before one gets too starry eyed, the curators point out that the choice of books ‘ensured a view of knowledge in line with the ideological and political principles of the regime, [and] attendance at libraries and participation in their cultural activities were a concrete expression of adherence to these principles.”

The exhibition includes models of the ancient buildings and fascinating insights into what you might call “celebrity libraries” – the personal libraries of the leading figures of the day, like the philosopher and orator Cicero. His various homes and villas all had libraries, with the one at Tusculum apparently surrounded by an elegant colonnade and including an upper gymnasium known as the Lyceum, and a lower gymnasium, called the Academia. A quick bit of dialectical argument and then some work on the biceps.

The exhibition also acknowledges the role of the Romans in developing the codex – the book with pages, punctuation marks and capital letters – in the late first century AD. There are displays of the very first tablets, ironically being photographed by tourists carrying the very latest tablets. The Tabula Cerata – literally, “board covered with wax” – was a rectangular wooden tablet covered with a layer of wax on which people wrote with a “stilus.” These tabulae could be single or gathered together in groups, held together by thongs – the early “pages,” or codex. A model of one of the grand libraries of ancient Rome.

An Echo of Borges in the Ancient World

In Borges’ story “The Library of Babel,” translated into English in 1962, he posits a world in which every single permutation of text in existence – or that will exist – is already stored in a vast edifice that sounds as if it might have been drawn by Escher or Da Vinci. “The universe (which others call the Library) is composed of an indefinite and perhaps infinite number of hexagonal galleries, with vast air shafts between, surrounded by very low railings.”

The Colosseum, with its system of lifts and moveable platforms to transport animals to and from the arena, can seem similarly complex – a wonder of architectural design and engineering for its time.

Borges observes that “a librarian of genius [could] discover:”

the fundamental law of the Library. This thinker observed that all the books, no matter how diverse they might be, are made up of the same elements: the space, the period, the comma, the twenty-two letters of the alphabet. He also alleged a fact which travelers have confirmed: In the vast Library there are no two identical books.

Phew. This is heady stuff. Especially when you’re just back from holiday. To put it another way: sorry, you Google guys at the scanners: it was Borges who first had the idea of assembling all the world’s knowledge in one place – even if only in fiction.

La Biblioteca Infinita. I Luoghi del Sapere nel Mondo Antico – “The Infinite Library. Sites of Knowledge in the Ancient World” runs at the Colosseum in Rome until October 5.