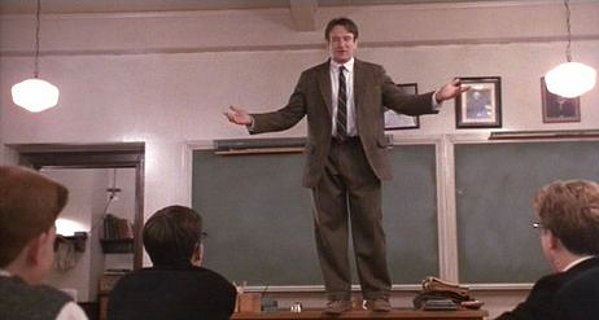 Roger Tagholm looks back at how Robin Williams brought moments of poetry and literature to life for a generation, instilling them in the popular culture. Williams in the iconic scene from Dead Poets Society

Was a line of poetry ever tweeted so much? After the tragic news of the death of comedian Robin Williams earlier this week, the hashtags #MyCaptain and #OcaptainMyCaptain – the first line and title of Walt Whitman’s elegy for Abraham Lincoln – swept through social media. People attached “deskies” – pictures of themselves standing on tables and desks, as they re-enacted the classic scene from Dead Poets Society. TV host Jimmy Fallon, who had earlier wiped away a tear, did the same on The Tonight Show.

But Dead Poets Society is not the only connection between the actor and poetry. Nearly ten years later, in 1998, the actor read Pablo Neruda’s Sonnet 17 at the grave of his girlfriend in Patch Adams.

It’s a lovely scene, filmed with the low sun casting long shadows through the trees. Williams reads from a page torn from a book, and then places the page on the coffin (Question: Would this work with an ereader? Would someone read from a Kindle and then tuck the Kindle underneath the flowers? It’s why physical books will surely remain).

Whether there will be any uplift in sales of Whitman or Neruda seems to be expecting too much, especially when these poems – any poem – can be found with just a few keystrokes. But another film that featured a poem, also in a scene of mourning, did lead to a slim volume of verse being published, although admittedly this was pre-Net and before sites like PoemHunter.com.

Stop all the clocks, cut off the telephone,
Prevent the dog from barking with a juicy bone,
Silence the pianos and with muffled drum
Bring out the coffin, let the mourners come. — in the 1994 film Four Weddings and a Funeral that Faber published a tie-in edition of Auden’s love poetry, Tell Me the Truth About Love, complete with a still of Hugh Grant on the cover.

Mrs. Doubtfire came from a book too, of course – Anne Fine’s Madame Doubtfire, now a Puffin Modern Classic. It is published in the US by Starfire as Alias Madame Doubtfire. It was a shame there appeared to be no comment from the author on his death, but Fine has always felt a little ambivalent about the films of her books.

“I feel quite detached from them, as if they have little to do with me,” she says on her website, in comments that have another layer of meaning following the tragedy. “What interests me is why people act the way they do: what’s deep inside them, pushing them. Film can’t show that. It can show brilliantly what happens. But only the book can explain the complex emotions and (sometimes self-deceiving) thought processes behind those actions. So, though I quite enjoy watching them, the films people make of my books are, for me, a bit like the fancy icing shell without the cake inside.” One other book has received much publicity following Williams’ death – Antoine de Sainte-Exupéry’s The Little Prince. Williams’ 25-year-old daughter Zelda posted a quote from the novel on Twitter and Instagram. “You – you alone will have the stars as no one else has them . . . In one of the stars I shall be living. In one of them I shall be laughing. And so it will be as if all the stars were laughing, when you look at the sky at night . . . You – only you – will have stars that laugh.” Heartbreakingly, she said she would try “to keep looking up.”

Her actions will only add to the aura that surrounds what is already something of a cult book. Its fans include such contrasting figures as Umberto Eco and Madonna. The actors Orson Welles and James Dean loved it too, the latter even has one of its most famous lines – “What is essential is invisible to the eye” – engraved on a shrine to the actor that was erected in 1977 near the site of the car crash that took his life.

Many poems are mentioned in Dead Poets Society, among them Robert Frost’s ‘The Road Not Taken’ and Robert Herrick’s ‘To the Virgins, to Make Much of Time, with its immortal first verse:

Gather ye rose-buds while ye may,
Old Time is still a-flying;
And this same flower that smiles today
Tomorrow will be dying

The death of Robin Williams coincided, in the UK, with the release of A-Level results to the nation’s 18-year-olds, many of whom – this correspondent’s included – will be heading off to university in September. This is a generation that has grown up on Williams’ films – a generation for whom Mrs. Doubtfire, in particular, and Night at the Museum, RV and Good Will Hunting have measured out their younger years. It is as if Williams’ death marks the end of their childhood, their coming of age – just as their leaving home to take one of the paths “through the yellow wood” to college marks the same.

It goes without saying that parents wish all of them the message of the poem, and of Williams’ most famous film: carpe diem. It has been a poignant few days for all of us, young and old.