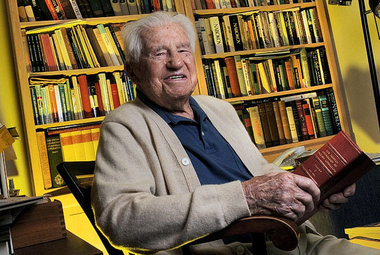 M.H. Abrams, the man behind the Norton Anthology of Literature, was honored by President Obama

Abrams, an emeritus professor at Cornell whose students included Harold Bloom and Thomas Pynchon, is known to generations of English lit students as the creator of the Norton Anthology of English Literature, the work that helped to form the canon of English literary works both in America and around the world.

First published in 1962, Carolyn Kellogg notes that the book was designed to be “portable” – although how a 1,000 plus page book could be called considered “portable” is really anyone’s guess.

“We tried to represent the greatest of English literary works in two volumes. And over the years, the bigger it’s gotten, the better it’s sold,” Abrams said in 1999.

Abrams, who grew up speaking Yiddish, was a scholar of Romantic poetry. He taught at Cornell for almost seventy years.

He is also the author of The Mirror and the Lamp: Romantic Theory and the Critical Tradition (1953), cited by the Modern Library as among the 100 best nonfiction books in English of the 20th century, and Natural Supernaturalism: Tradition and Revolution in Romantic Literature (1973). Most recently, he wrote The Fourth Dimension of a Poem and Other Essays, published when he was 100.