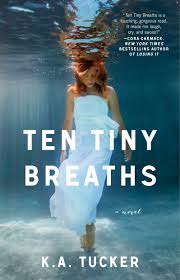 YA + Sex = New Adult literature, and it sells. But some booksellers remain unsure how to market it. YA + Sex = New Adult, but some booksellers remain unsure how to market it.

Writing for Toronto’s The Globe and Mail, Stephanie Chan tells the story of Kathleen Tucker, a self-published author of three YA romances who decided to try something different – romances with more sexually explicit content, aimed at a slightly older audience.

And just one month after her self-published novel, Ten Tiny Breaths was released online in October, 2012, the Ontario based author had made more than $50,000 and sold more copies in a single day than her previous three novels had in one month combined.

As Chan writes, more and more authors are doing the same, “taking advantage of a new and growing genre of literature aimed at primarily female readers between 18 and 25.” The genre, known as “new adult,” features primarily college-aged heroines learning to deal with life in their early twenties, with a special emphasis on romance and sex.

Monica Pacheco, a literary agent with the Toronto based Anne McDermid & Associates told Chan that “I think…a lot of the interest [in New Adult] is among romance publishers or contemporary publishers who have some interest in the romance. I think in the last year, I’ve seen a little over 30 deals for it, and by and large, they were mostly romance.”

And Margo Lipschultz, senior editor at Harlequin Enterprises LTD observed that while new adult titles have begun to be seen in bookstores on tables and end caps, few stores have begun creating shelf space specifically for the genre.

“I think they find the term a little confusing or not specific enough to capture a large readership,” she said, while telling Chen that her company had begun to focus on the genre after noting its success when it comes to digital sales.

“We’re always looking to ensure that we are growing awareness among print readers,” she told the paper. “That can entail anything from including bonus material that’s exclusive to print editions or just looking at ways we can partner with booksellers to ensure that we are shelving them in the right places.”

Another publisher that has jumped into the new genre is Atria, which plans to release 15-20 New Adult titles per year, compared with zero before 2012.

“The thing is in…convincing booksellers that it’s not just a fad, it really does exist,” Judith Curr, publisher and president of Atria, told Chan. “They haven’t really seen people coming into the bookstores and asking for the books perhaps. Whenever it’s a new area, they ask, ‘If I really am going to dedicate shelf space to a new area, what am I going to take it from?”

“All of the readers who made [young adult] explode are now new adult readers potentially,” she added.

But over at Flavorwise, Emily Temple has doubts about the whole thing, as the headline for her article “The ‘New Adult’ Genre is Still Condescending and Pointless” makes clear.

“…isn’t this just putting a label on the older end of romance-leaning YA? Do we need to do that? I’d say we do not. Also, doesn’t that description cover a lot of ground? Is the Secret History a New Adult novel? Young college students + sex + occult sacrifices, and yet it doesn’t feel like one…

“But the real question is, why do we think 18-25 year olds need another stepping stone – whether actual or intellectual – before they make it to full-on adult literature? If it’s a matter of finding books that people (women) that age relate to, well, there are plenty of books out there that deal with twenty-somethings trying to make it in the world, plenty of campus novels that speak to the experiences of people in that age bracket…if the books being called New Adult float your boat, more power to you. Read whatever you want. But it’s condescending to insist on a new, sexier genre in between YA and adult books, especially in a world where adults read YA books all the time, and many young adults read ‘adult’ literary fiction just as often…

“’New Adult’ became an official category last year, when it received its own Book Industry Standards and Communications Code, but I still don’t believe it. And neither do booksellers, apparently. It makes sense: in our Kindle-heavy age, bookstore shelf is becoming scarcer and scarcer, and so of course booksellers don’t want to make a place for “New Adult’ books. From all appearances, they’re just YA novels with extra sex…But the bottom line is this: as many writers and readers of fantasy and science fiction will tell you, for a robust literary world, we need fewer genre distinctions, not more. Let’s not let the marketing teams of the world shove books into little boxes of supposed meaning, or convince us of things about ourselves, or make those things true.”