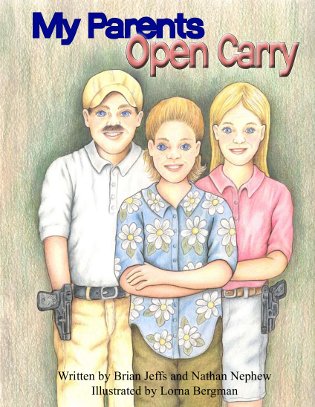 One of the more…controversial public events of the summer of 2014 in the United States has been the explosion of so-called “Open Carry” laws – laws that allow people to carry their firearms – handguns, rifles etc., openly in public, take them into stores, restaurants, basically wherever they’d like.

For some, it’s a visible defense of the second Amendment to the United States Constitution guaranteeing the right to bear arms. For others, it’s an all too public representation of America’s love for guns gone wild. And now, sitting on top of Amazon’s bestseller list for Children’s Government Books, is a book that explains how families that love guns together stay together: My Parents Open Carry.

As Raw Story reported, the authors and publishers of the book, Brian Jeffs and Nathan Nephew, are the co-founders of Michigan Open Carry. They claim that they were driven to write the book because they had “looked for pro-gun children’s books and couldn’t find any. Our goal was to provide a wholesome family book that reflects the views of the majority of the American people, i.e., that self-defense is a basic natural right and that firearms provide the most efficient means for that defense.”

The authors wrote on Amazon summarizing the book:

“Come join 13-year-old Brenna Strong along with her mom, Bea, and her dad, Richard, as they spend a typical Saturday running errands and having fun together. What’s not so typical is that Brenna’s parents lawfully open carry handguns for self-defense. The Strongs join a growing number of families that are standing up for their 2nd Amendment rights by open carrying and bringing gun ownership out of the closet and into the mainstream. If you open carry and have a difficult time explaining why to your family and friends, or if you want to learn about the open carry of a handgun, or if you’ve wondered if open carry is right for you, then this book is what you need. My Parents Open Carry was written in the hope of providing a basic overview of the right to keep and bear arms as well as the growing practice of the open carry of a handgun. We fear our children are being raised with a biased view of our constitution and especially in regards to the 2nd Amendment.”

An excerpt from the book makes the author’s feelings quite clear:

“Brenna’s Dad asked the women, ‘Why do you feel that guns in public are wrong?” The women explained that guns are dangerous. They kill people, and only the military and police should have them. Brenna’s Dad stated that yes, guns can be dangerous and should be handled with care, but so should cars, chain saws, and many other tools that people use every day to make their lives better.

He went on to say that guns save far more lives than they take. In fact, he stated that merely displaying a gun can deter a crime from happening – which is why he carries his gun in the open. The woman hadn’t thought about that. As she pondered these facts, and just before saying goodbye, Brenna’s Dad shared his favorite saying: ‘When seconds count, the police are minutes away.’”

The Guardian reports that, perhaps not surprisingly, open-carry supporters (and gun lovers in general) are raving about the book:

“Alan Korwin of gunlaws.com is quoted saying ‘boy does this fill a vacuum,’ James Towle, host of the American Trigger Sports Network calls it ‘outstanding’ and ‘long overdue,’ and John Roshek, founder of the Citizens League for Self-Defence adds: ‘Loved it, I ordered a copy for our school’s library.’ Another supporter, one “Hood,” is quoted on the book’s website calling it ‘a wholesome children’s book on the joys of having parents carrying guns openly.'”

Some of the reviews on Amazon have not been quite so glowing:

Modelled on the gay parenting books of the 1980s (right down to the moustache) this is a vital instruction book for everyone who wants to teach their children tolerance. Tolerance of moustaches that don’t match the wig, and tolerance of people who need to over-compensate for “something” by brandishing a gun in public. Don’t worry, we get both messages, loud and clear.

As long as no one ever uses any of these guns, ever. I mean ever. Then what could the harm possibly be?

(There is a bit about never using the guns ever, isn’t there? I probably missed it on the first read.)

By the way “Open Carry” isn’t a verb. And I’ll stand my ground and shoot in the face anyone who pretends it is

Hey, parents! Are you looking for a way to educate your kids about the importance of the 2nd amendment, but just can’t find the right pro-gun children’s book?

Are you worried that your kids will grow up believing they can rely on law enforcement for protection? Or that they’ll think wearing guns as accessories is a bad idea? That they’ll be judged for dressing like a soldier in wartime when they go out to eat with their friends?

Well, then look no further! With the notable lack of a Seussian rhyming meter (because this s*** is serious, and nothing rhymes with “AK-47”), this book will help teach your kids that intimidating other people is A-OK, as long it makes you feel safe. That you should embrace fear as a part of life because one day you will be assaulted, robbed, raped, and murdered (probably in that order). Don’t you want to prepare your family for this inevitability? Well, then be a Patriot, stand your ground, and buy this book today!

Charlton Heston will be proud.

And as quoted by The Guardian, children’s book publisher Elizabeth Laws, meanwhile, took to Twitter to say that it was the first time in 25 years that “a children’s book leaves me speechless.” “Would love to deconstruct everything wrong with this. #1, Open Carry isn’t a verb,” she wrote. “Bad enough that her parents pack heat, but who made a teen wear a granny blouse? Or tease her hair? #badparenting.”

But not to worry. On the My Parents Open Carry website (where, for a limited time only, buyers of the book will also receive a free copy of the “fun” book Raising Boys Feminists Will Hate!), the book is lovingly described as as something that “will be treasured for years to come and will be passed down to new family members”.