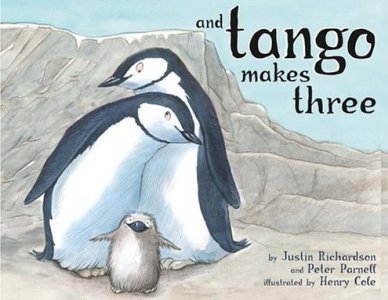 The Huffington Post reports that in a statement issued last week, the National Library Board (NLB) in Singapore announced that it would remove from its shelves (and then destroy) three children’s books featuring plots with gay or nontraditional families.

The titles to go are And Tango Makes Three, inspired by the true story of two male penguins raising a baby chick at the Central Park Zoo; The White Swan Express: A Story About Adoption, which tells the story of a lesbian couple’s decision to adopt; and Who’s In My Family: All About Our Families, which shows a variety of non-traditional family situations.

In a statement defending its actions, the NLB said, in part:

“NLB’s collection development policy takes special care of our children’s collections to ensure they are age-appropriate. We take a cautious approach, particularly in books and materials for children. NLB’s understanding of family is consistent with that of the Ministry of Social and Family Development and the Ministry of Education.”

As we reported earlier this year, right wing politicians in France called for a ban on books with similar themes, including Tango a deux papas et pourquoi pas? (Tango has two fathers and why not?), another children’s book inspired by the story of Tango and his two father penguins.

Huff Post reported that on Friday, Communications and Information Yaacob Ibrahim issued a statement on Facebook, endorsing the decision by the NLB. “NLB’s approach is to reflect existing social norms, and not to challenge or seek to change them,” he wrote, in part.

And in Singapore, the “existing social norms” means that gay sex is illegal, and homosexuality remains a topic that is rarely discussed. Even so, when news of the NLB’s decision went public, education proponents and gay rights activists made themselves heard:

Kirpal Sing, associate professor of English literature at Singapore Management University told Times that the decision to “ax” the books was a “very unfortunate step backwards.”

Deborah Tan, founder of the Singapore-based women’s site Material World wrote in a blog post, “A library is a place where people go to read up on a wide variety of topics and genres. It is where you go to read books written from different perspectives so you can FORM YOUR OWN OPINIONS. A library has no business telling us what we should or should not be reading. It certainly should not be acting on the opinions of anyone – vocal minority or silent majority. Rather, it should act on whether a book has the ability to inform and educate…Do you not think it is important for children to grow up understanding that such topics are not taboo and that they are not society’s outcasts for thinking they might want something different? It’s not just an education for kids, but also an education for parents who need to learn how to embrace their children for who they will become.”

And award-winning poet Alvin Pang, based in Singapore agreed, wrote on his blog that “This is a serious impoverishment of what books are and what knowledge means, and it can only harm our intellectual development and broader social discourse. This is at odds with the spirit of the National Library I have grown up with, come to love and continue to support. The best thing any library can do to serve society is to be resolutely neutral in making accessible the world’s available knowledge.”