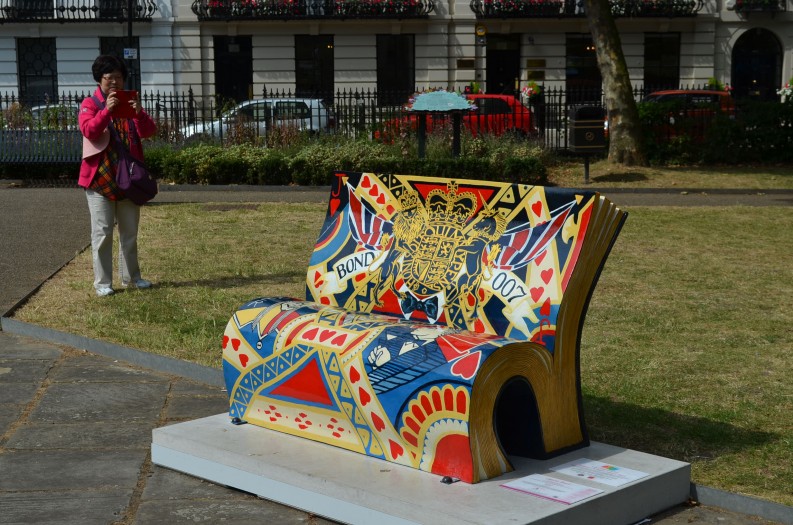 As part of a summer reading promotion 50 “book bench” sculptures have been placed around London in an initiative led by the National Literacy Trust and Wild in Art.

In London, the British Museum’s unusual “wheel of books” is not the only eye-catching piece of book promotion that has arrived in time for the summer holidays. Some 50 BookBench sculptures have been placed around the capital, in an initiative led by the National Literacy Trust and Wild in Art, the body which specializes in mass appeal public art events and which worked on the London 2012 Olympics and Paralympic mascot trails.

The benches, shaped like open books, celebrate a wide range of authors or fictional characters, from Virginia Woolf and James Bond, to Nick Hornby and Dr Seuss. Artists who have designed the benches include the Gruffalo creator Alex Scheffler, and Lauren Child and Cressida Cowell, creators of Clarice Bean. The “Pride and Prejudice” bench.

They make a novel (sorry), even faintly surreal sight, in London’s many parks and squares. The Pride and Prejudice bench is in Queens Square in Bloomsbury, opposite the National Hospital for Neurology and Neurosurgery where Ian McEwan shadowed a consultant for two years while researching his novel Saturday.

Just to the north, still in Bloomsbury, are benches dedicated to Sherlock Holmes and Virginia Woolf’s Mrs Dalloway, the latter almost opposite the house in which the author lived with her brother and sister in 1904. It is conceivable that the glorious London plane trees providing shade for this bench and the luncthime office workers on the lawns, are the same trees of which she wrote: “It was astonishing to stand at the drawing-room window and look into all those trees; the tree which shoots its branches up into the air and lets them fall in a shower; the tree which glistens after the rain like a body of a seal.”

Rather less poetically, one stroller took the weight of his feet and said “I’ve never sat on a book before.”

At the end of the summer all the benches are to be auctioned at an exclusive event in London’s Southbank Centre to raise funds for the National Literacy Trust’s work to raise literacy levels in the UK. Perhaps a bookseller will bid for one…