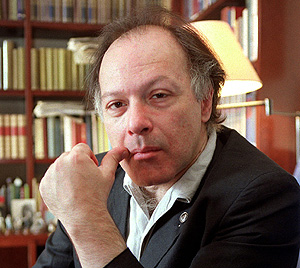 Spanish author Javier Marias argues that while there are plenty of reasons not to write novels, there’s one that is very important — a shot at immortality. Last week I finally started reading Javier Marias’ A Heart So White (New Directions), and all I want to do now is let one of his rolling labyrinthine sentences wrap themselves around me. (Or wrap myself around one of them…)

So it was a pleasure to find this essay Marias wrote for The Threepenny Review, outlining his seven reasons not to write novels – and his one reason to do so.

First, a brief synopsis of his reasons why not to:

1. “There are too many novels and too many people writing them.”

2. And precisely because anyone, whatever his or her profession, can write a novel, it is an activity that lacks merit and mystery.”

4. “The novel is no guarantee of fame, or only a very minor fame, which could be acquired by far speedier and less laborious means.”

5. “The novel does not bring immortality, largely because immortality barely exists anymore.”

6. “Writing novels does not flatter the ego, even momentarily.”

7. “I will list here all the usual, boring reasons, such as the isolation in which the novelist works, his suffering as he wrestles with words, and, above all, syntax, his fear of the blank page…”

But finally, he discusses the one reason he can see for writing novels, “which may not seem much in comparison with the preceding seven, and which doubtless contradicts one or another of them:

“Writing novels allows the novelist to spend much of his time in a fictional world, which is really the only or at least the most bearable place to be. This means that he can live in the realm of what might have been and never was, and therefore in the land of what is still possible, of what will always be about to happen, what has not yet been dismissed as having happened already or because everyone knows it will never happen. The so-called realistic novelist, who, when he writes, remains firmly installed in the real world, has confused his role with that of the historian or journalist or documentary-maker.

“The real novelist does not reflect reality, but unreality, if we take that to mean not the unlikely or the fantastical, but simply what could have happened and did not, the very contrary of ‘what is happening now.’ What is ‘merely’ possible continues to be possible, eternally possible in any age and any place, which is why we still read Don Quixote and Madame Bovary, whom one can live with for a while and believe in absolutely, rather than discounting them as impossible or passé or old hat.

“The only Spain of 1600 that we know and care about is the Spain of Cervantes, the Spain of an imaginary book about other imaginary books and out of which an anachronistic knight errant emerges, rather than out of what used to be or was actual reality. What we call the Spain of 1600 does not exist, although one has to assume it did; just as the only France of 1900 that exists for us is the one Proust decided to include in his work of fiction. Earlier, I said that fiction is the most bearable of worlds, because it offers diversion and consolation to those who frequent it, as well as something else: in addition to providing us with a fictional present, it also offers us a possible future reality.

“And although this has nothing to do with personal immortality, it means that for every novelist there is the possibility – infinitesimal, but still a possibility – that what he is writing is both shaping and might even become the future he will never see.”

To read the piece in its entirety, click here.