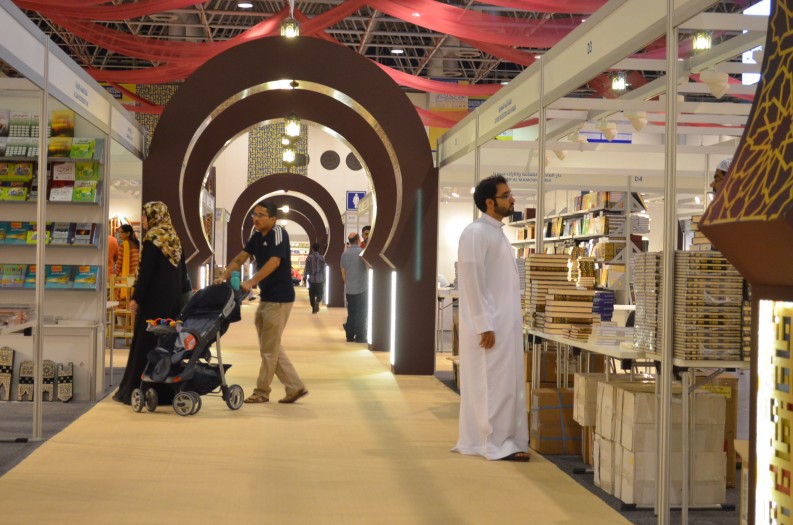 One of the giant ancient Qu’rans from Egypt on display at the Islamic Book Exhibition in Sharjah.

The Qu’ran is the star at the Islamic Book Exhibition in the United Arab Emirate of Sharjah, where the holy book being celebrated in a myriad of guises.

The holy Qu’ran in all its guises is on display at the Islamic Book Exhibition in the United Arab Emirate of Sharjah which continues through July 17 – from the rows and rows of lavishly decorated, gold-embossed, thumb-indexed surah-by-surah [verse by verse] editions to the unusual audio version in the shape of “Aamina” and “Yousuf,” the talking Muslim dolls. Well, the latter aren’t quite the full Qu’ran, but press Aamina’s hand and she sweetly intones the first surah: “In the name of Allah, the Compassionate, the Merciful/Praise is only for Allah, the Lord of the Universe, the All-Compassionate, the All-Merciful…Show us the straight way, the way of those whom Thou hast blessed, who have not incurred Thy wrath, nor gone astray.”

This is the first time that Sharjah has held an Islamic Book Exhibition and some 128 publishers from 12 countries are here, including the UK’s Desi Doll, early learning specialists for languages spoken in the Indian subcontinent and “publishers” of Aamina and Yousuf. His Highness tours the exhibition.

As with so many educational and cultural initiatives in this small emirate, the inspiration for the exhibition came from His Highness Dr Sheikh Sultan bin Mohammed Al-Qasimi, Member of the Supreme Council and Ruler of Sharjah. It is part of the ongoing program of events marking the Sharjah Islamic Culture Capital 2014 (SICC), and it makes a perfect addition to the wider Ramadan Festival taking place in other halls at the Expo Centre.

The exhibition hall looks different from how it does in November for the regular Sharjah International Book Fair (SIBF). The aisles have been given Islamic arches, which are faintly similar to giant keyholes – as if the holy words found beyond will unlock the Truth. There are publishers and booksellers here from Egypt, Saudi Arabia, the Lebanon and Syria, as well as from the UAE, but the atmosphere is a little quieter than at SIBF.

It’s Ramadan, so the exhibition has very late hours – 9pm until 1am – and in the early evening people are breaking their fast and enjoying their Iftar (sunset) meals and sweets. There are not the crowds of schoolchildren you see at the SIBF. This is partly because there are far fewer general titles on display – especially fiction – but also because there are many other distractions elsewhere in the Ramadan festival. Just outside the hall, in the giant lobby and walkway that bisects the Expo Centre, is something very special – something that if it were in London or New York or Paris or Madrid would receive wide coverage. His Highness has arranged for Egypt’s very rare and hugely valuable “Mamluk Mushafs” – ancient early Qu’rans – to be brought over (don’t even ask about the insurance) and shown to the public for the first time anywhere in the world. A “mushaf: literally means “the manuscript bound between two boards” – in other words, an early form of book – and “Mamluk” refers to the dynasty that ruled Egypt and Syria from 1250 to 1517.

Laid out in display cases are 42 volumes, the oldest dating back to the 12th century. They demonstrate a variety of calligraphic styles and have ornate and richly colored opening letters – these are the Islamic equivalent of Europe’s illuminated Medieval manuscripts. It is fascinating to look at them and think of their long, long journey across the years to this present moment.

Dr Mohammed Saber Arab, the current Professor of Modern Arab History at Al-Azhar University in Cairo and the former Egyptian Minister of Culture, personally gave His Highness and other dignitaries a tour of the display on the opening day.

British Muslim convert Idries (Christopher) Mears runs the English language ‘book merchant’ Blackstone & Holywell’, chiefly selling to libraries in the Gulf, and is full of praise for His Highness’ respect for culture and learning. “I want to help Sharjah expand its international program as promoter and guardian of Islamic culture. I have given His Highness a proposal for a Muslim book fair in London to be called People of the Prophet. I hope it will be all embracing, a conference and festival too that would attract university presses.”