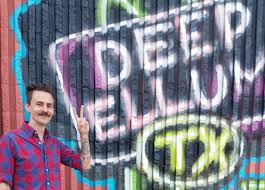 Will Evans addressing the more than 200 people who attended the Deep Vellum launch party at Wild Detectives bookstore in Dallas this past Monday.

Will Evans on the of his Dallas-based publishing house, Deep Vellum Press, and his intention to turn American readers into a community of translation lovers.

In The Brooklyn Quarterly, Will Evans wrote about the path that led him to open his own publishing house, Dallas, Texas’s Deep Vellum Publishing “as an arts and education nonprofit organization with the mission to enhance the open exchange of ideas among cultures through translation, and to connect the world’s greatest un-translated literature with readers in original English translations. Not too radical, right?”

“Why translation, you may ask? Well, for starts, America’s low numbers of published and read translations is leading to an increasingly myopic and parochial American literary culture, a problem noted by a member of the Swedish Academy some years ago in describing why an American would not win the Nobel Prize in Literature anytime soon. History check: the last American who won the prize was Toni Morrison, in 1993.” The launch list of Deep Vellum titles, with covers.

“…literary translation is also a contentious business matter. There are thousands of good to all-time-great books published in the world every year in every language imaginable, but only a couple hundred of those ever get published in English, and that’s in a good year. Any book published in any language other than English in 2013 that might ever actually get translated into English and published has a better chance of appearing in bookstores in 2023 than in 2014. The publishing gap is usually due to lag times in the long process of translation or to American publishers’ unwillingness to take risks on undiscovered foreign authors. A case in point: the translation of László Krasznahorkai’s Sátántangó that took translator George Szirtes actual decades to finish, finally appearing in English in 2012, twenty-seven years after it was originally published in Hungary. Most publishers would rather see an author develop an audience abroad (preferably in huge numbers), or a particular style that demarcates the author as a unique literary voice. It’s an awful process for foreign writers to try to crack the English-language market, there are only so many publishers who publish any translations at all, and there are precious few who will publish beyond the confines of the most commercial or the most highbrow of world literature. Those authors caught in-between are stuck in a cycle that does not favor their talents.

“The Translation Database keeps track of publishers…Dalkey Archive Press, for example, published far more translations than any other publisher (forty-two in 2013, thirty-one in 2012, showing the power that one publisher can have with strong backing. Dalkey’s ten-volume Library of Korean Literature, sponsored by the Literature Translation Institute of Korea, helped catapult the number of Korean titles in English from three in 2012 to thirteen in 2013. Other publishers of note in the translation space include AmazonCrossing, (twenty-four translations in 2013); Europa Editions and Seagull Books (each with sixteen in 2013); Penguin, Archipelago Books, Open Letter, and Pushkin Press (each with ten); FSG (nine); Houghton Mifflin Harcourt, Lontar (an Indonesian cultural foundation), New Directions, Other Press, and Yale University Press (all with eight).” “The quality and quantity of non-English literature is clearly not the problem. The problem that all publishers of translations, and especially we smaller independent publishers have is how to get translations in front of readers. Only by solving it can we can change the dialogue around translations and get the English-language world actually reading the translations we publish.

“For too long, publishing has treated readers as passive recipients of information. The status quo has been changing recently—as the ongoing digital revolution given publishers encouragement to engage with their readers directly. The same digital revolution that has lowered the barrier of entry to start a publishing house has granted readers an increasingly powerful voice in determining what is published and how it is marketed. For example, one of my favorite publishers, And Other Stories, seeks input on submissions and ideas from circles of readers by hosting a book club-like discussion that takes place in multiple locations across the globe.

“There is a real value today in treating readers not merely as consumers but as agents of cultural change, who now have the chance to become deeply invested in your publishing mission as a business as well as a philosophical enterprise. It is in the best interest of every independent publisher to cultivate an engaged readership that will make a lasting impact on our culture in the long run.”

“If you want to start publishing outside of New York and if you’ve never worked in publishing before, know that you’re crazy— but good crazy. You will likely need to work constantly to build a more vibrant book culture in your city in general, not just in publishing. Whatever that means and whatever it takes, do it. Constantly. Host literary events, open a bookstore, start your own lending library, start a book club or two, write unsolicited reviews of current works in translation and submit them to any newspaper, weekly, and magazine based in your city. Learn more languages. Reach out to people who may never have read a book in translation other than the Bible (you realize it’s translated, right?). Start a bookstore. Or patronize one unceasingly. Build a community. And read all the books. If not, you’ll be publishing into the void, and nobody wants that: not you, not your authors, not your translators, and certainly not your readers, who don’t even know you exist yet but have been waiting for you to change their lives.”

To read the rest, and to learn how to open your own publishing house, click here.