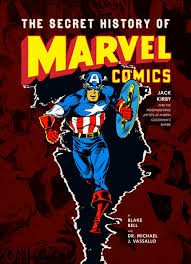 Today, Marvel Comics may be a multi-billion dollar business built on the back of superheroes, but its past is littered with lewd, pornographic publications. As another summer gets underway, so the nation’s movie theaters fill up with blockbusters based on comic books. So far this year we’ve already seen The Amazing Spider-Man 2, X-Men: Days of Future Past while Guardians of the Galaxy is looming. All of these films are based on characters that first appeared in Marvel comic books. Marvel therefore is indisputably big business—or at least, intellectual properties which first saw the light of day in Marvel comic books are big business. The publishing arm of the business is fairly pathetic compared to its heyday a few decades ago.

And yet however many billions Marvel characters generate for parent company Disney today, the company had inauspicious beginnings, as Blake Bell and Dr. Michael J. Vassallo’s recently published book The Secret History of Marvel Comics (Fantagraphics) reveals. Indeed, before Spider Man or the Fantastic Four appeared on the scene in the early 1960s, Marvel’s original publisher Martin Goodman had been churning out pulp garbage for decades. And since most of that output was completely forgettable, shamelessly derivative tosh, it has been largely forgotten—until now.

In fact, “pulp garbage” is much more the focus of the book than Marvel comics or superheroes generally. Goodman was quick to jump on the costumed hero bandwagon once it got rolling in the late 30s and early 40s, but for many years his publishing firm, operating under multiple names, churned out pretty much anything that Goodman figured he could sell, quality be damned. Thus, title and cover image of Captain America notwithstanding, The Secret History of Marvel Comics is perhaps better understood as literary-archaeological dig exposing decades of changing fashions in the public taste, as from the early 1930s to the early 1970s, Goodman chased trends, paid his contributors as little as possible, and shifted lots and lots of periodicals in exchange for money.

Indeed, Bell and Vassallo make it very clear that Goodman had little interest in either innovation or the quality of what he published. He was a businessman, and if he was the first publisher of characters that are now worth billions, it was almost entirely accidentally. Indeed, the purity of Goodman’s focus on money is striking. Aside from a personal fondness for Westerns, he was a man as little affected by romantic myths about the ennobling practice of reading as it is possible to be. Had Goodman been able to make more money selling, say, underwear instead of periodicals, it’s reasonable to assume he would have done that instead.

Perhaps I am naïve but I had no idea that in the 1930s there was a vogue for graphically illustrated narratives in which women were subjected to various forms of degradation and torture. But the genre existed, and the book contains a hefty number of images culled from the magazines that printed these stories. (If you must, Google it…) It’s pretty strong stuff, and almost completely forgotten today.

And so The Secret History of Marvel Comics is part archeology, part luxurious art book and something else besides: a history of dodgy publishing practices in the 20th great detail all the shell companies Goodman created, highlight his habit of reprinting stories without informing readers that they were purchasing stale content and also stress his commitment to paying his freelancers as little and as late as possible. “He was viewed by the people who worked for him as little more than an opportunistic businessman,” the authors write, and by the end of the book it is easy to understand why.

And yet, as I read about Martin Goodman’s various schemes I was struck by one thing: he may have paid peanuts, but at least he paid. For not only did Goodman miss the potential value of the superheroes he owned, practically giving away the television rights in the 1960s, but it never occurred to him that he could have offered to pay his contributors in “exposure” instead of money… and still sell his business for a great deal of money. No, for that trick —and indeed that level of contributor naivete — we had to wait until the 21st century.