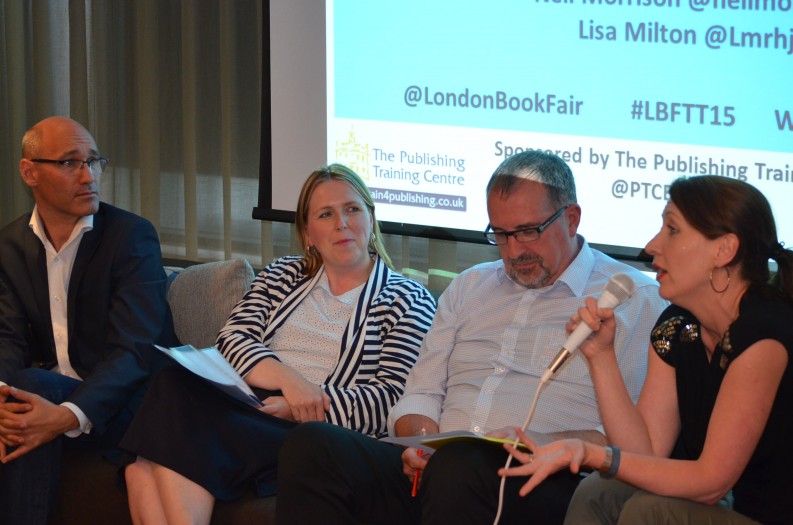 How can publishing compete with the allure of the tech companies? Do the tech companies scream “today” – even “tomorrow” – while publishing is still perceived as being stuck in “yesterday?” Does media portrayal of the publishing industry help or hinder? These were among issues raised at the London Book Fair’s third ‘Tech Tuesday” event last week, held in super cool Hoxton, a very funky area of east London, close to Old Street’s “silicon roundabout” where so many app companies are based.

It’s an interesting and vital area to explore. People within the book industry may know that the business is cool (whatever that means – such terms are almost impossible to define), but their opinion doesn’t matter. It’s how the business is perceived from the outside that counts. Will the bright, imaginative, tech savvy, book reading (or content devouring) twentysomething choose Gollancz or Google, Faber or Facebook, Orion or O2?

“When I tell people I work in publishing, they all assume I must have a quick exit strategy,” said Penguin Random House Human Resources Director Neil Morrison, rather summing up the situation. “We’re not helped by a media that talks the industry down, that is full of stories about the death of the book and fewer stories about how this is an industry full of imaginative people and brilliant ideas that can change the world.”

A poster on the wall of the Hoxton Hotel, in whose library the event was held, read: “You know more than you know,” which, coincidentally, is advice Morrison would give to all publishers. “Publishing is too apologetic,” he believes. “It needs to behave with more swagger, more confidence. I came into the business from outside [previously he was with the Home Retail Group, owners of Argos where he worked alongside Kate Swann who would go on to be the very successful Chief Executive of WH Smith], and I think publishing is both arrogant and insecure. It’s arrogant because it’s not willing to learn, and it’s insecure because it doesn’t realize what it is good at.”

Milton believes publishing is cool – naturally – but that it isn’t perceived that way. She also thinks there is a problem with recruitment. “We need different people in publishing. We need to bring in people from different backgrounds. For too long it’s been about white, middle class people who have grown up in the south. Fortunately, bodies like Creative Access [the charity founded in 2012 to help tackle the under-representation of ethnic minorities in media] are doing good work in this area.”

Morrison agreed. “We’ve been slow to fish in other ponds. The way we select people is awful. We look to recruit people in our like. We’re risk averse when we bring people in. We’re not good at attracting people who think differently and who change the way we publish. We need people who create agitation in organizations.”

“We’ve been slow to fish in other ponds. The way we select people is awful.”

He wondered whether the UK Publishers Association was doing enough in the way of out reach, and there were one or two mutterings about its website not being such a good advertisement for the industry. This was not entirely fair since the PA has an ongoing program of talks at six form colleges and universities, and works with Creative Access to widen the pool of talent coming into the industry. The PA’s homepage www.publishers.org.uk also has a link to YouTube with young publishers talking about what they do, which would certainly seem to fit any ‘cool’ criteria. This includes an interview with Liv Edwards, Penguin’s Brand Co-Ordinator, who recently gave a talk about working in a publishing at a south London school careers fair.

Website design is very subjective. Perhaps the PA is slightly hampered because of the wide range of its audience – from academic journals to trade publishers – and its requirement to cover such hard-to-make-sexy subjects as the latest copyright directive from Brussels.

Rafferty raised a key point – and a worrying one – when she observed that, thanks to digital, everyone was a publisher now. Brands, banks, bars might all have publishing strategies of a kind. Interestingly, one of the people speaking on the PA’s website is from the British Dental Journal, almost underlining the point.

“What digital has done is create other companies that are cool too and we might be losing people to them,” she said. “Publishing travels now in a way it didn’t before.”

But equally, that could mean a flow of creative talent back and forth. In fact, the theme of this particular Tech Tuesday was Creativity. Is creativity enough and what are the skill sets required by the industry as it moves forward? It seems that those skill sets are already broadening, with many publishing houses now employing data analysts, coders, math graduates as well as English Lit majors. Consumer insight is of paramount importance, and the ability to mine all that data.

But just as important, the panel agreed, was the nose for a good story. The real challenge is the same as it always was: how to communicate the existence of that good story; how to make it discovered. That’s the same as it was in 1970 and 1980, and will be in 2020 and 2030. The difference of course, is that thanks to digitization and the internet, the tools by which that communication can be made are very different, and are constantly evolving.

Perhaps the one constant, the never changing aspect, is the desire for a good story, which has remained the same. It’s the medium and the message cliché again. We’re not gathered around campfires anymore listening to the village griot, our faces bathed in light from the flames. The light now is from the tablet or e-reader (and still the bedside anglepoise!). But we still want to be transported, just as much as we ever did.