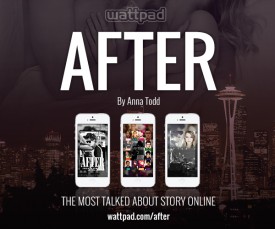 After gaining more than 800 million reads on Wattpad, 25-year-old Anna Todd was given a six figure advance from Simon & Schuster. Billboard reports that 25-year-old Anna Todd has “scored a six-figure advance when Simon & Schuster imprint Galley Books acquired the rights to ‘After,’ her steamy fan-fic story about Harry Styles and the boy band One Direction that has been a hit on the digital self-publishing site Wattpad as well.”

“Hit” is putting it mildly. Gawker reported that Todd originally posted her story on Wattpad in 300 daily installments, making up three volumes. The story was an immediate hit, gaining more than 800 million reads, and inspiring art and playlists on both Twitter and Instagram.

Billboard reports that Wattpad’s Ashleigh Gardener said that even before Todd had finished the first volume, “After” was “registering all over the company’s internal social media metrics.” The impact was so huge that when Todd mentioned Pride and Prejudice and Wuthering Heights in her story, Wattpad registered spikes in the reads (which is how the company counts clicks on its site).

As “After” grew in popularity, Wattpad in fact worked with Todd, and helped her to build her fan base as the last two volumes were posted, and worked with her to get a book deal, “essentially acting as her agent.”

At Sugarscape, Todd explained how she began writing One Direction:

“It really started when I was on Instagram one day, and I saw these little mini stories people were writing about Harry Styles, which was crazy to me. Then one of the girls I had followed on Instagram put her story on Wattpad. I had now idea what that was, but I followed the link and it was this whole world of 1D fan fiction. I started reading all kinds of it, and then decided that I wanted to give it a go myself. I didn’t think anything would come of it though – it was just for fun!”

In November, Gallery Books plans to publish a reworked version of “After” that, according to Billboard, will turn Harry Styles into a completely fictionalized character, “in the way that ‘Twilight’ characters Bella and Edward were reworked into Anastasia and Christian when ‘Fifty Shades of Grey’ went from fan fic to traditional book.”