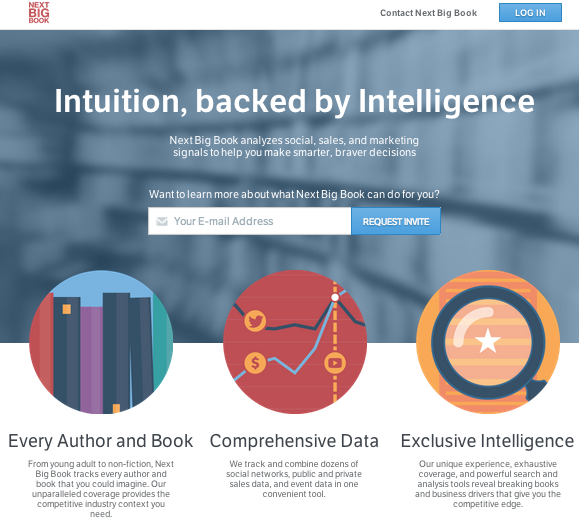 The Next Big Book promises publishers and authors dynamic analytics on sales and social media.

Two data analytics companies, Next Big Book and Qlovi, won startup prizes at BEA, but several other companies caught our eye and are worth watching through 2014.

Next Big Book took First Prize and Qlovi was second in the BEA Startup Challenge this past week, both decisions being described, in prize-fight fashion as “Unanimous.” First prize brought a $10,000 purse (from Ingram) and second place $5,000 (sponsored by Sourcebooks).

Next Big Book is impressive, in that it monitors, tracks, and pretty much thinks of any data source one could think of—and how to break down (and optimize that data) to make (you guessed it!) “The Next Big Book.” All the usual suspects are tracked: Social media, Wikipedia hits, iTunes, Spotify—but so are things like Late Night TV appearances (aka “The Conan Bump”). Variously called “The ‘Moneyball’ of books” and “The Nate Silver of Publishing,” Next Big Book certainly had the slickest and deepest presentation.

Qlovi, of the many educational startups, was by far the most fully realized. Their software allows K-12 teachers to assess and track students’ reading and writing skills, and even connects them with the author through “Q & A” (“Qlovi and Author”). Importantly, they work with the Common Core Curriculum, which is being rolled out across much of the American school system. Next Big Book and Qlovi beat out four other finalists (who each had about six minutes to present to a panel of judges and 2 minutes of Q & A) which included:

So much for the winners. What about those who didn’t make the cut?

Start Up Alley at BEA had some really fascinating companies, and our collective pick for first prize (not that we actually had a vote) was for Chinese Cubes, which is not only the most original way to learn Chinese (both the simple and complex versions), but certainly the most fun. Unlike language-learning downloads or DVDs or CDs, Chinese Cubes uses literally a roll of the dice (with ideograms) to teach children (or in our case, three adults approaching 45) how to speak and identify Chinese words. Perhaps its appeal is limited, but we found it limitlessly exciting and fun.

For second place we chose Beneath The Ink. For years now, the book industry has been talking (or carping) about “Enhanced Ebooks” – a term that is as clunky as an ebook with “enhancements” would seem. However, Beneath the Ink removes the clunkiness, and replaces it with simple, one-touch pop-ups (unlike the current  e-reading “experience” where you highlight, then click “Wikipedia” and then lots of luck getting back to where you were reading). An example might be a reference to a work of art: one touch brings up a color photo of that work of art, and one more touch toggles it away. Elegant in its simplicity.

Every now and then someone wonders aloud, “How does an author SIGN an ebook?” (unless you don’t might the author signing your Kindle, Nook, iPad or mobile phone). One of the most endearing start-ups was Enskri, which allows for personalization of ebooks, especially ebooks given as gifts. The ebook can be personalized not only with “signing” of one’s name, but video and images can also be added. What this idea may lack in scope, it certainly makes up for in capturing the obvious: ebooks make for lousy gifts despite the facts that something like 70% of all physical book sales (according to Enskri’s founders) are bought as gifts.

And finally we liked Active Spud: a “get-of-the-couch-and-DO-something” startup that encourages kids to use books as interactive tools to EXERCISE. Given the rate of childhood obesity and kids’ propensity for thinking that “physical activity” hits its apogee with “Wii Sports,” it was refreshing to see a company committed to getting kids excited about all different forms of exercise (including yoga!).

Congratulations again to Next Big Book and Qlovi – and thanks to all the sponsors who made the competition and Start Up Alley possible: only by endless experimentation can the publishing business survive, succeed and expand.

So tell us, which companies impressed you and why at BookExpo America? Let us know in the comments.

This article was produced with reporting assistance from Sherrie A. Wilkolaski and Ellie Maas Davis.