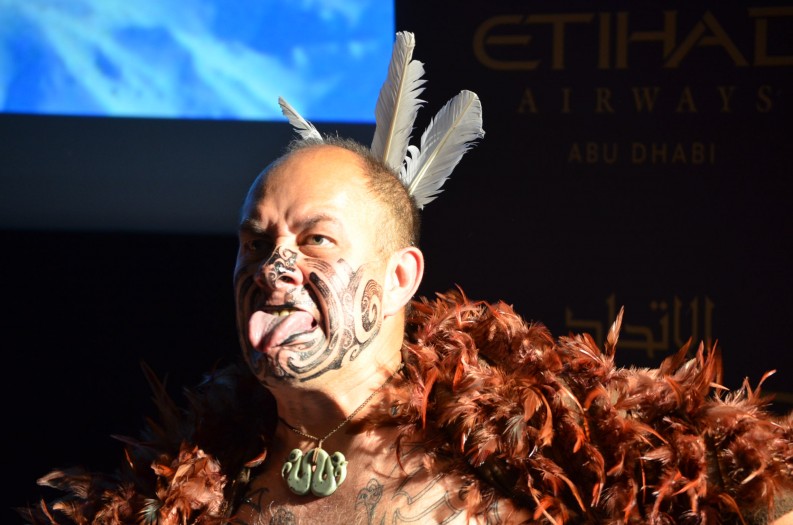 The sounds and rhythms of the haka echoed around central London last weekend as the inaugural Australia & New Zealand Festival of Literature & Arts wrapped up on Sunday night at Kings College on the Strand. This was a joyous, four-day celebration of Antipodean creativity that will surely see its Director Jon Slack – who has worked tirelessly to bring this giant wave to London’s ‘beaches’ – receive an industry award, either here or from the ANZ book world.

He certainly deserves it, since the event is a major boost to the discoverability of voices and authors from a long way away, and Slack has been persuasive in getting major sponsors like Etihad Airways on board.

The festival saw around 130 writers, poets, artists, musicians, dancers and performers fill many rooms at the university in some 60 events in a reverse cultural colonization of the capital. As the author of The Whale Rider, the Maori writer Witi Ihimaera put it: “Make way Britannia, make way Albion. Antipodeans are invading your halls. Our side is up now, if only for a few days – we have reversed the polarity!”

One of the biggest names appearing was the Australian novelist Tim Winton, whose latest work Eyrie has just been published by Picador in the UK. He spoke to a packed audience at the opening event. Among the crowd were Bloomsbury co-founder Liz Calder, who spent much of her childhood in New Zealand and who is a trustee of the festival, Virago founder Carmen Callil (originally from Melbourne), HarperCollins’ UK MD Simon Johnson, British Council Director of Literature Cortina Butler, Sydney-born novelist Kathy Lette, Two Roads Publisher Lisa Highton and Claire Drysdale, UK Director of Adelaide-based Allen & Unwin, as well as numerous ex-pats living in the city.

Winton was particularly interesting when he talked about the land and how it influences not just his work, but his whole way of thinking. “I didn’t realize this until I came to university in Paris. My sensory palette and responses were different to Europeans. In Europe, you have architecture; in Australia, we have land. And we have so much more land than people. That means we have more gaps, more pauses, more spaces than events. In many ways, Australia is not yet humanized – it remains implacably itself, so much larger than us.” However, these figures do not include digital sales which been climbing in both territories. For example, Hachette Australia says that ebooks now account for 22.5% of the publisher’s overall sales, compared to 18% in 2012. Similarly, in New Zealand, ebook sales grew by 50% for HarperCollins in 2012-2013. The Australian book industry has now formed the Book Industry Council of Australia (BICA) to look at the changes the industry is facing through digitization, off-shore internet bookshops and the consolidation of publishing away from New Zealand and into Australia.

At a panel on the state of the ANZ publishing industry, Lisa Highton, who spent 25 years in Australia with Doubleday, HarperCollins and Hodder, pointed out that there is positive news too. “The independent sector in Australia is very strong in comparison to the UK. They have some fabulous shops, which account for something like 30% of the market. But my concern in terms of buying books for the UK is how difficult it is to see what is happening there – and that’s why these festivals are so important. They are the perfect opportunity to showcase talent.

Winton was asked about the plight of bricks-and-mortar bookshops. “Bookstores and libraries are both under siege,” he said. “I care about both very much. Bookshops are pillars of civilization, reservoirs of the imagination. The independent sector is a little stronger in Australia than it is here [the UK]. They are special places. There is nothing like being greeted by someone who is literate and decent and who reads and is happy to show you around.

“But if you use Amazon and that works for you, that’s fine too. The world changes, and hopefully we’ll adapt. Certainly, we have it in our power to sustain bookshops. You simply have to use them…”

For UK audiences, one of the biggest names to appear was Clive James, whose bravura solo performance was a sell-out and was widely covered in the media. The Sydney-born, long-time UK resident was a much-loved TV critic and talk show host in the ’80s and ’90s. Now frail and poorly – “in the departure lounge” as he puts it – his show at the ANZ festival is likely to be his last public appearance, which gave it an added poignancy.

Slack has secured three-year funding from the Australia Council for the Arts and, judging by media coverage, his baby is off to a flying start. “The festival is just the beginning of what we hope will be a new, ongoing platform for events and educational outreach,” he said. “It exists to inspire further discussion around the role of these two great countries both in the UK and beyond.”