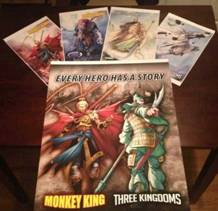 “Although our comics are already tremendously popular with Asians all over the world, JR Comics is on a mission to share the Monkey King’s dazzling adventures with North American readers,” said JR Han, CEO and president of JR Comics. “We envision many of the 6,000 copies of volume one of Monkey King, Three Kingdoms, and Outlaws of the Marsh we dispensed at BEA finding its way to the young adult audience.”

Mr. Han has a particular affinity for the four major classic tales associated with the mythic Chinese Monkey King. Just like American superhero stories, Han believes that the tales lend themselves perfectly to the easily-accessible graphic novel form.

Work began on the project in 2005 with the express goal of producing graphic novel adaptions of Chinas’s four great classical novels: Journey to the West, Romance of the Three Kingdoms, and the forthcoming Water Margin and Dream of the Red Chamber.

“We’ve set an unprecedented goal of creating comprehensive adaptions of the East’s greatest stories via one of the West’s greatest storytelling innovations: the comic book,” said Han, adding “The highly acclaimed artist Wei Dong Chen joined us to combine his traditional Chinese painting techniques with modern translations, which resulted in a masterpiece.”

Besides bringing these great works to a younger audience in the United States, Han has even greater ambitions for these graphic novels. “I think America and China should be friends,” he said, “and America must understand China’s culture. These are the basic stories, and while the originals can often be inaccessible to American readers, I think these versions can help introduce Americans to classic Chinese literature. (Han also hopes that after readers finish the graphic novels, that they will then be inspired to read the books in their original form.)

“By reading these editions,” Han said, “I’m hoping that readers will become more and more interested in and embrace Chinese culture.”