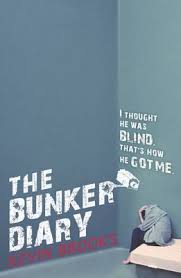 As The Los Angeles Times reports, the Carnegie Medal, created to recognize an outstanding new book for children and young adults, is seen as the British equivalent of the America’s Newbery Medal. But, “unlike the Newbery jury, however, the Carnegie jury very often has an eye for darker works, especially in the young adult category.”

That being said, this year’s winner of the Carnegie in the 14-and-over category, Kevin Brooks’ The Bunker Diary (Penguin), is the very definition of a “darker work.” As Hector Tobar wrote, “The book tells the story of a 17-year-old boy who’s lured off the streets of London by an older man, who then imprisons the boy in an underground bunker with other captives. The kidnapper offers to free any boy who kills one of his fellow prisoners.”

And with that, there some who were infuriated by the win. Writing for The Telegraph, in what The Guardian called “an extraordinary attack,” Lorna Bradbury, while defending previous “dark” winners such as Maggot Moon and A Monster Calls said that:

“I don’t feel the same about The Bunker Diary, which has all the hallmarks of an issue-led discussion piece rather than a literary novel, and seems to have won on shock value rather than merit. As Brooks revealed in his acceptance speech, he fought for 10 years to get this novel into print, and was repeatedly told it wouldn’t work for children unless he changed the plot to allow for the possibility of hope. He won the day and, as it stands, his novel is a uniquely sickening read.”

“This vogue for dystopian lit goes back more than five years, with notable bestsellers such as Suzanne Collins’s The Hunger Games, in which children take part in a televised public fight to the death, and, more recently, Veronica Roth’s Divergent, set in a post-apocalyptic Chicago But The Bunker Diary is much nastier. It’s extremely close to real life, for one thing – or to what it might hold at one troubling extreme. And there’s no distancing alternative-world scenario at work.

“The reader’s experience over 250 pages is to watch six people sink into despair and to inflict damage on each other in the process. And we are left with the uncomfortable feeling that, like the prisoners, we have spent time being manipulated by a psychopath and pervert.

“…there’s nothing on its cover to alert readers – or parents – to the nastiness of its subject matter. There’s no warning attached; not even a young adult specification, which is normally used to flag up books that have adult content. And the fact that this is now the winner of the Carnegie Medal will mean that it will be read by more teenagers still.”

But writing in The Guardian, Allison Flood noted that Helen Thompson, chair of this year’s CILIP judging panel, said that The Bunker Diary was “absolutely the book Carnegie should be championing – superbly well-written, atmospheric, and loved by readers,” adding that it was “being devoured by young people across the country.”

“Published as a young adult novel, not a children’s book, The Bunker Diary is clearly aimed at an older audience, as can be seen from the cover, and the description on the back of the cover. Age or ‘warning’ stickers are misleading and condescending – although I’m sure the publisher would be thrilled to have a warning sticker. Sales would go through the roof.”

And, she added, “shock value” was not taken under consideration when choosing their winner. “The CILIP Carnegie judging process is transparent and based entirely on the criteria. At no point do the judges consider ‘shock value.’ We pride ourselves on basing all judgments on literary quality alone – as can be seen from the outstandingly well-written winner of the 2014 award.”

Thompson added that the book is “full of hope,” and contains “many instances of humanity, love, community, support and forgiveness. Incredibly well-crafted, it is indeed a mastery storyteller who can leave the reader with such a feeling of hope even when the ending is not a traditional one.”

For his part, author Kevin Brooks, at the Carnegie ceremony said that “children – and teens in particular – don’t need to be cosseted with artificial hope that there will always be a happy ending. They want to be immersed in all aspects of life, not just the easy stuff. They’re not babies, they don’t need to be told not to worry, that everything will be all right in the end, because they’re perfectly aware that in real life things aren’t always all right in the end.”