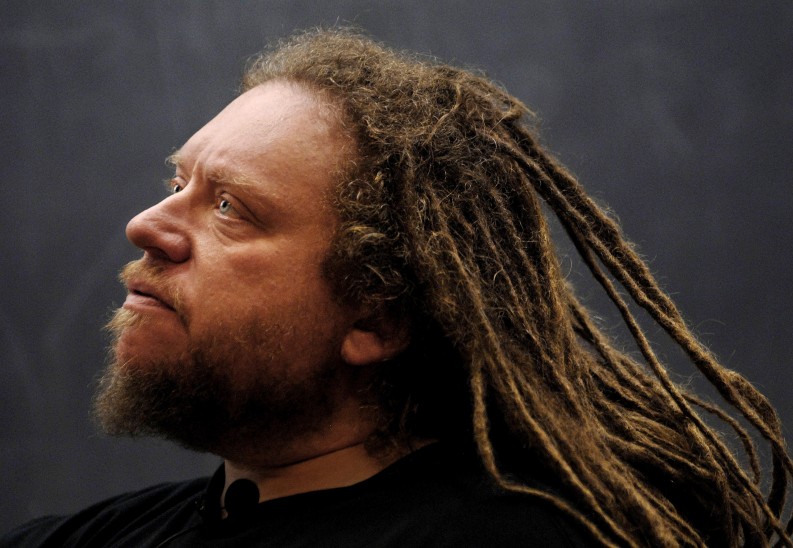 The German Publishers and Booksellers Association has awarded the 2014 Peace Prize of the German Book Trade (Friedenspreis des Deutschen Buchhandels) to American author, computer scientist and musician Jaron Lanier. The 25,000-euro prize has been awarded each year since 1950 to a person who “reflects the German book trade’s commitment to the promotion of international understanding.”

Lanier will receive the prize during the Frankfurt Book Fair, on October 12, 2014. Past winners of the Friedenspreis include Laio Yiwu, Orhan Pamuk, Susan Sontag, and Chinua Achebe.

The Board of Trustees announced their selection on Thursday, saying:

“Throughout his career, Lanier has consistently and effectively spotlighted the threats our open society faces when deprived of the power to control its own progress and development. While acknowledging the gains in diversity and freedom that accompany the growth of the digital world, Lanier has nevertheless always pointed to the dangers involved when human beings are reduced to digital categories. His most recent work Who Owns the Future? is an appeal for vigilance in the face of oppression, abuse and surveillance – a call to equip the digital universe with structures that respect the rights of individuals while simultaneously fostering democratic participation.”

Lanier is often credited as the “father of virtual reality,” working on computer simulation in the 1980s. But as Ron Rosenbaum wrote for Smithsonian magazine, “Lanier was one of the creators of our current digital reality and now he wants to subvert the ‘hive mind,’ as the web world’s been called, before it engulfs us all, destroys political discourse, economic stability, the dignity of personhood and leads to ‘social catastrophe.’”

In an 2010 interview with Publishing Perspectives, Lanier discussed the future of writing and publishing within the context of an increasingly digital civilization: “As much as I admire on many levels, both in terms of marketing and design, what Apple and Amazon are doing, it’s not a long-term plan for civilization…The walled garden thing can’t last forever. It’s not sustainable. There has to be something similar to what Apple and Amazon are doing that’s a single, unified, universal store for everybody. There can still be a layer of publishers within that, and Apple and Amazon can be publishers within the universal system. But they can’t have monopoly channels.”

Lanier’s two books, You are Not a Gadget and Who Owns the Future? have received praise from critics and argue that the digital age will continue to bring about cultural and economic upheaval.