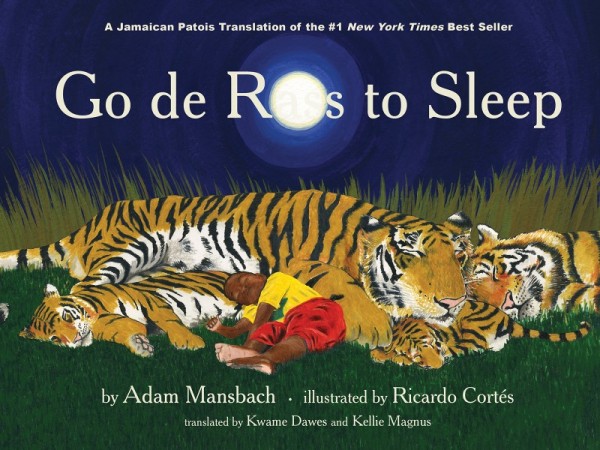 LargeUp reports that Adam Mansbach’s best-selling Go the F*** to Sleep, described as a “bedtime book for parents who live in the real world,” which has already been translated into more than 30 languages worldwide, will join a very short list of books in history (including the Bible, of course) to be translated into Jamaican Patois.

Jamaican writers Kwame Dawes and Kellie Magnus did the translation, retitled in the much more printable patois title Go De Rass To Sleep (Akashic Books). And as the proverbial icing on the proverbial cake, the audio version, also released through Brooklyn publisher Akashic Books, is narrated by reggae singer Shaggy. Does it get much cooler than that?

So, as Largeup asked, how did Go the F*** to Sleep, first published in 2011 and in development as a feature film find its way into Jamaican Patois? Adam Mansbach, also noted for having written Angry Black White Boy and the creator of Samuel L. Jackson’s pro-Obama “Wake the Fuck Up” ads, explained:

“Both Johnny Temple, Akashic’s publisher, and I are big Jamaica-philes. He publishes a lot of Jamaican writers, we’re both big reggae heads, he has hilarious stories about roadie-ing for Eek-A-Mouse. So from the beginning, we’d always joked about how cool it would be to do a JA edition. And when we ended up with a surprise hit on our hands, the possibility started to seem more and more real – especially since Jamaican patois is such a great language to curse in.”

(Indeed, as Largeup points out, rass, while not a literal translation of f***, is in fact one of Jamaica’s most versatile curse words, and the word that best captures the meaning of the original title. Dawes and Magnus said in an author’s note that “It comes the closest in terms of versatility and easy application to f***. It is, in Jamaica, not as profane as f***, but it is only barely less profane than f*** in America.”)

It was, in fact, Dawes and Magnus’s interest in translating the book that finalized the deal. “He’s probably the most famous living poet in the country, and she’s an important author and publishing figure as well,” Mansbach told Largeup about his collaborators. “And I think they did an incredible job – the proof being that anybody can read this book and sound authentically Jamaican. Not that I’m advocating that motherfuckers start speaking with Jafakin accents.”

Dawes and Magnus even claim (tongue in check of course) that Go De Rass to Sleep is “far superior to the original,” not because of their work, of course, “but because this has been a given of all translations from Yankee things to Jamaican things.” To prove their point, the two cite Bunny Wailer’s “Dreamland” (a cover version of the song “My Dream Island” by the group El Tempos), Burning Spear’s version of the Grateful Dead’s “Estimated Prophet” (definitely), and “Jamaica’s hugely successful and actually better-tasting, Kentucky Fried Chicken franchises.

The pair wrote, “An enterprising Montegonian decided to start his fried chicken chain and called it ‘Come-tek-ee.’ For English speakers the runaway brilliance here will be lost on you, but I rest my case. Okay, let’s be nice. Go the F*** to Sleep is a hilarious, clever, and entertaining stroke of genius. We are honored to have a chance to share it in a yardie stylee.”