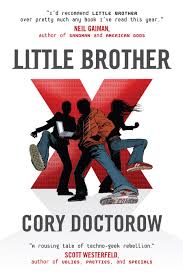 Cory Doctorow’s novel “Little Brother” has been cut from a Florida schools summer reading program after the principal accused it of promoting “hacker culture.”

The Pensacola News Journal reports that “an author is crying foul after Washington High School Principal Michael Roberts pulled his book from the school’s ninth- and 10th-grade summer reading list.” Indeed, on hearing his YA novel had been pulled from the summer reading program at Pensacola, Florida’s Booker T. Washington, author Cory Doctorow spread the word on the popular blog BoingBoing.

The book in question is Cory Doctorow’s Little Brother, described by Jacket Copy as a “book about teenagers whose ability to navigate their school’s computer system is a game until there is a terrorist attack, and they are swept up by the Department of Homeland Security. When they are released, they face a frightening surveillance state.”

All of Booker T. Washington’s students were going to read Little Brother over the summer for a One Book/One School program. And then, when they returned to school in the fall, there would be discussions of the book and its contents.

But when the school’s principal learned about the book he stepped in, and this summer’s One Book/One School program was canceled. According to Doctorow, the principal’s complaints included that the book seemed to endorse “hacker culture,” and questioned authority.

The book, however is not entirely banned from the school: it remains on the list as an “optional summer read” for advanced 11th grade students.

But at Jacket Copy, Carolyn Kellogg noted that when the book was first published in 2008, Neil Gaiman wrote he would recommend it to teens “over pretty much every book I’d read this year…Because I think it’ll change lives. Because some kids, maybe just a few, won’t be the same after they’ve read it. Maybe they’ll change politically, maybe technologically. Maybe it’ll just be the first book they loved or that spoke to their inner geek. Maybe they’ll want to argue about it and disagree with it. Maybe they’ll want to open their computer and see what’s in there. I don’t know. It made me want to be 13 again right now and reading it for the first time, and then go out and make the world better or stranger or odder.”

“My publisher, Tor Books, is sending 200 free copies of the paperback of my novel Little Brother to Booker T Washington High School, because it’s the first school were any of my novels has been challenged by the school administration…”

“I don’t think this is a problem because my book is the greatest novel ever written and the kids will miss out by not reading it, but because I think that the role of an educator is to encourage critical thinking and debate, and that this is a totally inappropriate way to address ‘controversial’ material in schools. Little Brother is recommended by the Florida Library Association for use in schools – it’s even been a One City/One Book choice for all of San Francisco. I’ve visited dozens – if not hundreds – of high-school groups around the world to talk about it.

“The school faculty who worked so hard on this asked for our help fighting back against censorship, so my publisher, Tor, has agreed to send 200 copies to the school. For my part, I’m sending them two of these Lithographs posters that have the full text of the book, and a copy of the UK-only, slipcased, limited edition Little Brother for their annual charity auction.”

And in any case, students can also download the book for free, again, thanks to Cory Doctorow.